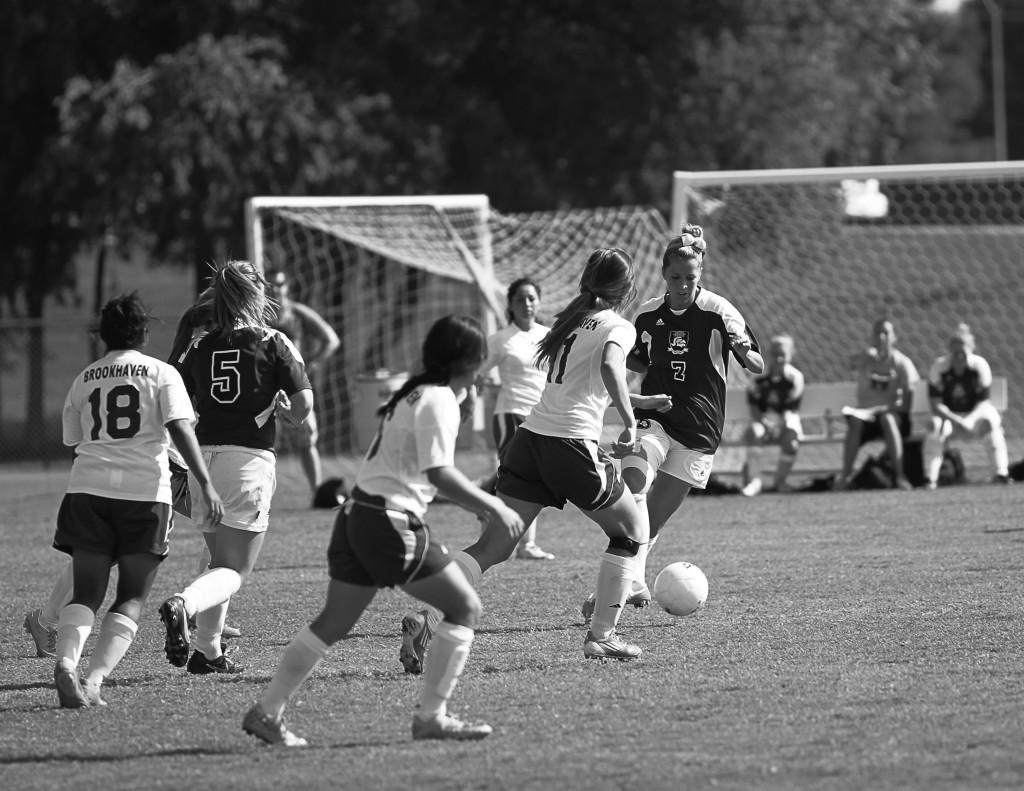 The Brookhaven College Lady Bears soccer team (3-0-0) traveled to Southwest Adventist University Sept. 5 for its third shutout win of 8-0, putting its record at 3-0. Head coach Dayna Davenport expected the women to play a very strong game.  She was not disappointed when the team shut down Southwest Adventist in its third consecutive victory.
On Aug. 29, Lady Bear Soccer upset Dallas Christian College in what appeared to be an easily fought battle that ended in a shutout win of 8-0. This victory came after the team’s first game at Schreiner University with a shutout of 6-0.
The Lady Bears team continues to dominate its opponents. Taking shot after shot and a strong goalkeeper contribute to its triumphs.
Left forward Jessica Trutza, 17, attributes their wins to lots of hard work, “We had two-a-days starting Aug. 1 before the season started,” Trutza said. This is her first year with the Lady Bears. She said: “Playing college soccer has been a great opportunity for me.  It’s good, however, but the hours are long and it’s hard to manage my time when my presence [at practices and games] is demanded.  It’s important to find new ways to win games for us to continue to grow as a team.”  Trutza said she intends to graduate from Brookhaven next May with an associate’s degree.  Her goal is to pursue a career as an MRI technician.
She would not, however, turn down an offer of a full-ride scholarship to attend a four-year university where she could earn a bachelor’s degree.
In her first year playing for the Lady Bears, forward Payton Kames has led the way putting the ball in the net. In three games Kames has made 10 goals, earning her recognition as NJCAA Division III Player of the Week in early September.
Team captain Alex Padilla said,“I think we’re going to do really well. Last year we made it to the conference tournament and had a chance of going to nationals, so this year we’re trying to make it all the way.”
Davenport wants to focus on keeping grades up, maintaining a high team grade point average and transferring sophomore players to four-year universities. The team hopes to make it to nationals this year and win if possible.
Davenport said: “I’m not much for expecting [to win] but I am for wanting the girls to do the best that they can every game and that’s all that I can ask from them is just give me 100 percent and we’ll see where it gets us. If you don’t give yourself 100 percent you’ll never know what you could have accomplished.”