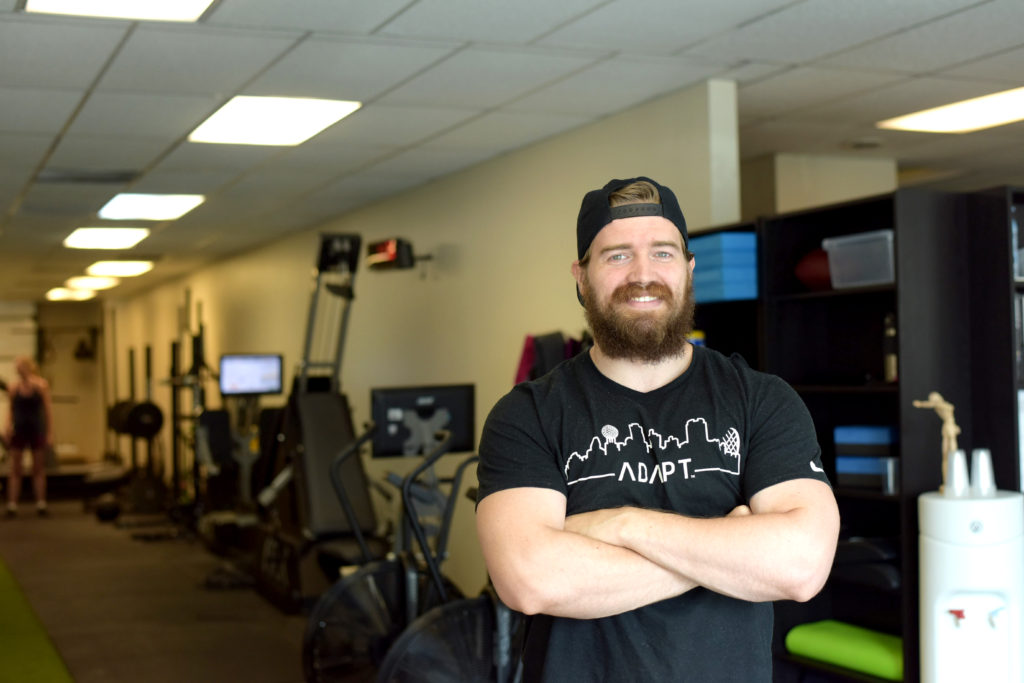 Photos by Brandon Donner |Robert "Bo" Alexander, owner of Adapt, stands in front of training equipment at his gym.

The smell of sweat permeates the air and the sounds of loud grunts and barbells slamming onto weight racks echo from wall to wall at Adapt, a 2,000-square-foot Dallas gym. Owner Robert “Bo” Alexander, a former Brookhaven College student, opened his first location in Dallas two years ago.

Earlier this year, he opened a second gym in Austin. In all, he maintains 12 employees and approximately 80 clients.

“Everything we do is one-on-one personalized, utilizing our cutting-edge technology, and we are one of the few places that provide it in Dallas,” Alexander said.

“This new form of training has brought a lot more business into the gym and allowed us to expand our offering in a unique way,” Alexander said.

Though he had an athletic background, playing basketball, football and baseball in high school, Alexander said he never thought about opening a gym.

At Brookhaven, Alexander majored in education. He had dreams of becoming a coach or a teacher, he said.

It was not until he began strength training to recover from a knee injury that the idea to open a gym crossed his mind. Dealing with his own recovery inspired him to want to help others with their rehab and recovery.

He gained experience managing three successful similar gyms in Austin and training clients at a physical fitness company called ARX, which also sells some of the machines he uses at Adapt.

“After that, I was interested in helping other people with their injuries and encouraged them to do strength training as well,” Alexander said.

“I was living in Austin and knew that I could successfully carry out this model in Dallas,” Alexander said.

As a new business owner, Alexander said he was excited to open and launch his gym, but was also stressed at the thought of doing so. However, he said he never thought about giving up.

“Every day was a long day and if you don’t have a lot of business right away you tend to wonder, ‘Why aren’t people calling or coming in?’” Alexander said.

But his persistence paid off. So far, Adapt has trained professional athletes and business owners. “In Austin, I trained a New York Times bestselling author and lots of entrepreneurs, which is great because I get to hear their great ideas and I learn more from them,” he said.

While days at Adapt are still long, Alexander now focuses on such larger business goals as moving his Dallas location into a bigger space and getting more clients.

Alexander said he is passionate about his job because he believes he can bring long-term change to people’s lives.

He enjoys the feeling of helping his clients become pain free, rehabilitating them after injuries and boosting their self-esteem. He said his favorite thing about his job is seeing his clients’ confidence grow.

Lucas Amen, a personal trainer at Adapt, said, “I enjoy working at Adapt because I am able to build a relationship with my clients on a daily basis.”

Yvonne Atkins, a client, said, “I have been coming to Adapt for a while now and I can honestly feel and see the difference compared to when I tried to go to a regular gym.”