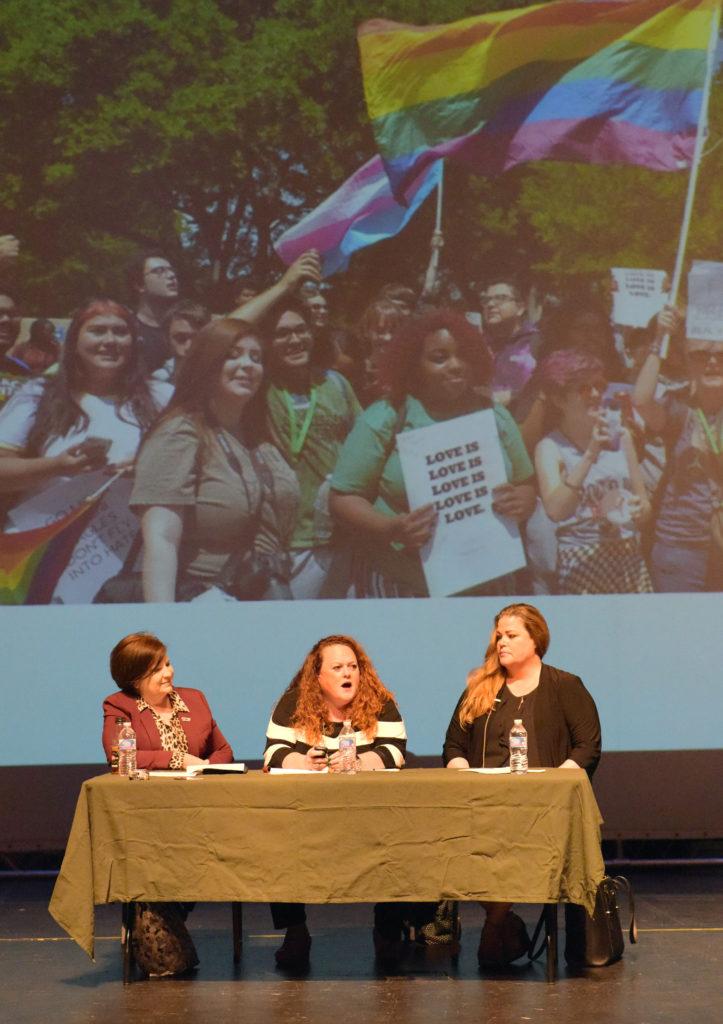 Three student affairs experts from The University of Texas at Dallas, University of North Texas and Texas Woman’s University shared their insights on student freedom of speech. The event, “Enabling Freedom of Speech, Diversity of Ideas and Civil Discourse on Campus,” was hosted Sept. 19 in the Performance Hall.

The speakers said they had no uniform approach because each campus faces different situations, and therefore, every institution applies its own policies when it comes to the challenges of the freedom of speech.

At TWU, marches or protests are rarely seen on campus, especially due to the absence of partisan student organizations, Stephanie Krauth, associate vice president for student engagement at the university, said. TWU shapes students to focus on understanding the complexities of issues using their education rather than their partisanship, she said.

“Facilitating conversations within a secure and safe environment where students can speak up and engage in a civil discourse helps them find their point of view, and are patient and positive ways to make a better culture,” she said.

When people hear “bystander intervention,” they think of someone jumping in and stopping a fight, Amanda Smith, dean of students at UTD, said. “But we took it down to its smallest level,” she said. When things go wrong on campus, UTD uses its Bystander Intervention Initiative. The initiative encourages students to talk out their differences.

Although UNT uses surveillance cameras on its campus, it also employs containment policies to prevent threats caused by hate speech. “When we get word that outsiders are probably going to be coming onto campus, we pull together a team of the police, emergency management, my office, the university communications, relations and marketing,” Maureen M. McGuinness, dean of students at UNT, said. “We think of every possibility of things that we need to think of in regards to safety.”

The speakers said they coordinate common safety and security measures and standards with their police departments. They hold misbehaving protesters accountable, especially if demonstrations go wrong and disrupt the normal functioning of the institution.

“Our No. 1 goal here is to keep our students from crossing that line,” Smith said. “If a class has been disrupted by noise from outside, then that’s considered a disruption and those people can be asked to leave.”

Public university officials and representatives were concerned by President Donald Trump’s March 21 executive order, which stated public universities and colleges could lose federal subsidies if they restrict or censor students’ freedom of speech at their campuses. Trump said, “If a college or university doesn’t allow you to speak, we will not give them money. It’s very simple.”

According to the Washington Post, Peter McPherson, president of the Association of Public and Land-grant Universities, said the order was alarming. McPherson said it could subject federally funded research to political influence.

Many Texas university and college officials were confused about how to implement Texas Senate Bill 18, which went into effect Sept. 1 and protects expressive activities at public universities.

SB 18 was passed June 10. However, public universities and colleges have until August 2020 to adjust their regulations and codes to fit the law. This grace period gives higher education institutions an opportunity to raise concerns, challenges and proposals for better implementation of the law.

The law identified all common outdoor areas as traditional public forums where free speech can be exercised, except with reasonable restrictions justified by the institution’s governing board. It is also content-neutral and viewpoint-neutral, which means an academic institution cannot discriminate based on the topic or issue discussed.

“Senate Bill 18 has changed all of our lives on campus because our legislative session doesn’t really align with our academic calendar,” Smith said. “Oftentimes, laws and bills are passed and we have very little time to prepare and adjust to those.” Smith said UTD did its best to inform the student body and community about the bill.