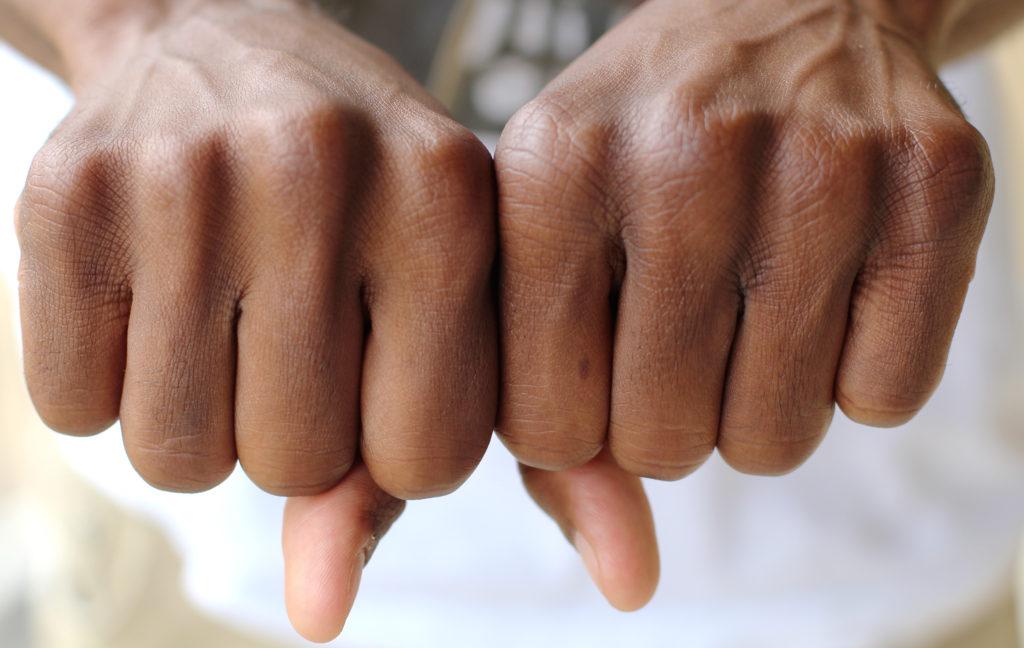 Photo illustration by Sam Mott | Bare-knuckled combat may be safer than boxing with gloves.

Bare-knuckle boxing has a 173-year history that was put on pause in 1892, according to Sports Illustrated. Well over a century later, this legacy picked back up where it left off. Dallas-Fort Worth’s own mixed martial artist Johnny Bedford competed in the first modern regulated bare-knuckle event, which took place in Cheyenne, Wyoming, last June. He, like everyone who competed, lived to tell the tale.

Since that event, Mississippi and New Hampshire have also legalized bare-knuckle and more states are expected to legalize bouts, according to Forbes.

While this is historic, there is some question as to whether it is a step back or forward for combat sports. It also raises questions about the safety of fighting bare-knuckle. There are drawbacks to bare-knuckle boxing, but I think it is ultimately safer for fighters.

However, Mike Bussey, who helps run Xtreme Knockout, an MMA and muay thai promoter in Texas with his sons Thomas and Christopher, said he does not see bare-knuckle boxing becoming widespread in the U.S. He said no one wants to see fighters get seriously hurt, and no-gloves fighting has the appearance of being too brutal. He feels that gloves give boxing the perception, and to some degree, the reality of being a safer sport. They make it more palatable for fans.

This is also what people thought back in the 1700s, according to Sports Illustrated. Jack Broughton, who is often referred to as the “Father of Prize Fighting,” drew up the first code of rules for boxing, which included gloves, or mufflers, as they were called, in the interest of appealing to noblemen and gentlemen viewers.

This set a precedent for combat sports. Regardless of the safety of athletes, making fighting digestible for fans has allowed it to flourish as a professional sport.
Today, gloves are used primarily to protect the hands, not the head, Oklahoma City ringside doctor Larry Lovelace said. Fight-bite in particular is the main concern for doctors such as Lovelace.

Fight-bite is a laceration or cut on the hand resulting from a punch landing on an opponent’s teeth. Though the cut itself is not generally severe, bacteria from the mouth can get trapped in the joint space, infecting the wound, according to sinaiem.org, the site for the Mount Sinai Emergency Medicine Division of Emergency Ultrasound. “It’s dangerous enough to where you can actually lose your hand,” Lovelace says. “It’s just a really nasty infection.”

While Bedford understands the possibility of someone suffering from fight-bite, he doesn’t think it happened once during the thousands of punches thrown at the bare-knuckle event in Wyoming. That’s what a mouthpiece is for, he said. He said he had zero fear of fight-bite going into the ring.

Jason Thalken, author of “Fight Like a Physicist: The Incredible Science Behind Martial Arts,” said the choice between gloved and gloveless fighting used to be clear, according to combatsportslaw.com, a site following legal developments in combat sports. The thinking used to be, “wear gloves to prevent injury,” but this was before people had a firm understanding of chronic traumatic encephalopathy, or CTE.

CTE is a progressive degenerative disease of the brain found in people with a history of repetitive brain trauma, according to concussionfoundation.org. The symptoms of the disease usually appear in patients during their late 20s or 30s. It can affect a person’s mood and behaviors. It makes it difficult to control impulses, aggression, depression and paranoia.

“Today, we need to think a little harder,” Thalken said. Cuts and broken hands might stop a fight or end a fighters’ career, he said. But brain injuries can take away the fighter’s ability to function as a human being. He said that while boxing and MMA gloves reduce the risk of injuries like cuts, bruises and broken bones, they increase the frequency and intensity of momentum transferred to the brain.

Bedford said the things he can do to fighters when his hands are wrapped with gloves on is scary. He argues MMA and boxing are more dangerous than bare-knuckle because of this. Bedford does predicts people may break their hands more or need more stitches because of bare-knuckle boxing. But, those  aren’t the injuries he’s worry about. “Stitches don’t change how I talk to my grandkids,” Bedford said.

After 30 years of this work, Lovelace said he has not and would not be a ringside doctor for bare-knuckle fights.

In an emailed statement, the Texas Department of Licensing & Regulation said they are currently evaluating information on bare-knuckle boxing, which is currently not authorized under Texas law. The department’s main focus now is addressing issues regarding dehydration, weight-cutting protocols and drug-testing standards.

While bare-knuckle may be less dangerous in some respects, incorporating it in the world of combat sports will be a balancing act, trying to both keep the fans happy and the athletes safe.