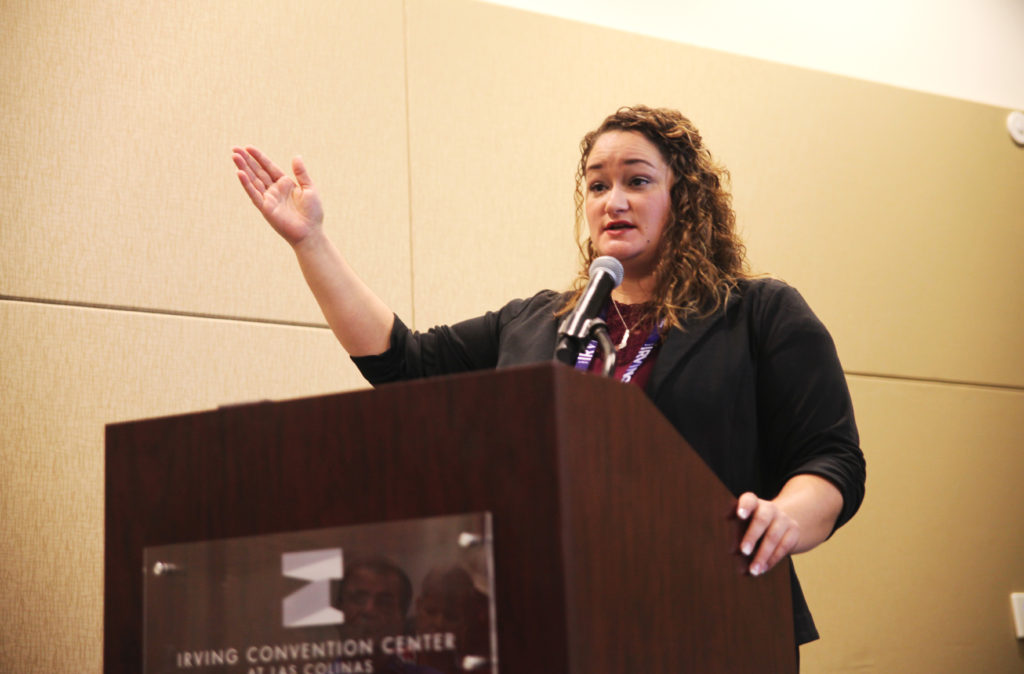 Photo by Dr. Dank | Heather Fazio, director of Texans For Responsible Marijauana Policy, speaks to a room full of people about cannabis policy during the Lucky Leaf Hemp Expo Sept. 20 at the Irving Convention Center.

Texas has found itself in a bind once again, while trying to regulate cannabis with seemingly willful ignorance.

The Texas Compassionate Use Act, enacted by the Texas legislature in 2015, Texas’ medical cannabis program, originally allowed only patients diagnosed with intractable epilepsy to receive cannabis through one of the three state-licensed dispensaries, according to thrillist.com, a site covering food, travel and entertainment.

It is one of the most restrictive medical cannabis programs in the country, according to thrillist.com. Texas finally expanded the program May 22 beyond epilepsy to include patients diagnosed with multiple sclerosis, autism, Lou Gehrig’s disease, terminal cancer, spasticity and other neurodegenerative diseases such as Parkinson’s and Alzheimer’s.

While the expansion did add more conditions and diseases, it did not consider how cannabis could stop other medical conditions from developing. The state will give low-THC cannabis to terminally ill cancer patients to ease the pain that comes with imminent death, but will not let cancer patients who are still in the early stages use it, even though some preliminary studies have shown the plant may have antitumor and cancer preventive effects, according to the National Institute of Health’s National Cancer Institute.

The Compassionate Use Program is enforced by state police, which more than likely plays a huge role in the irrationally run program because they may not know all they need to know about cannabis. Surely there are some educated individuals in the Department of Public Safety, but it is not a building full of board-certified doctors and physicians. It’s not reasonable to expect a law enforcement agency to have all the answers regarding medicine.

Heather Fazio, the director of Texans For Responsible Marijuana Policy, said, “We think that it should be doctors making that decision on what the dosage should be. Not everyone is going to need high levels of THC, but it is a therapeutic component of the plant and right now it is still kind of shrouded in a lot of fear because, God forbid a patient feel good and there aren’t any other drugs that have an altering effect on the mind.”

Hemp is now federally legal, according to Fortune.

Gov. Gregg Abbott signed Texas’ legislation into law in June. The law allows for hemp to be purchased and consumed by Texans as long as the product does not exceed the federally legal THC content .3%, according to Texas Tribune.

The problem is that the state-issued cannabis has a THC content of .5%, .2% over the federal limit.

Now, .2% might make a huge difference if you’re taking a breathalyzer test for alcohol, but in the cannabis world, .2% of THC does very little to affect potency. “With the legalization of hemp, the Compassionate Use Program is largely irrelevant,” Fazio said. “For some people, some of the time, that .2% will make an impact on their lives and that is a good thing.”

Getting into the Compassionate Use Program might be as difficult as entering a fraternity or religious cult. Then, after jumping through all the hoops to get in, possessing the marginally higher-THC State-issued cannabis makes you ineligible to buy a gain under federal law. And that’s a big deal to many Texans, Fazio said.

The DPS office posted an update on their website Sept. 16 that said they are taking dispensary applications from growers and businesses to add local options where patients under the program can get their cannabis instead of limiting them to three dispensaries. DPS is expecting an increase in demand for low-THC cannabis, but with the separate legalization of .2% THC cannabis, the program could still flop.

It is possible that people would want to stay in the program for the comfort of purchasing their cannabis from a licensed dispensary, but now that they have the option of ordering their cannabis from the numerous hemp farms across the country and to the growers and businesses directly, it’s unlikely that most will stay.

EDITOR’S NOTE: Dr. Dank is not a real doctor. It is the pseudonym chosen to protect the identity of the author of the column. Dr. Dank grew up in a state where marijuana for medicinal and recreational use has been legal for a number of years. The Courier does not advocate the use of marijuana or any illegal substance. Under current state law, possession is illegal in Texas and punishable with prison time and fines.