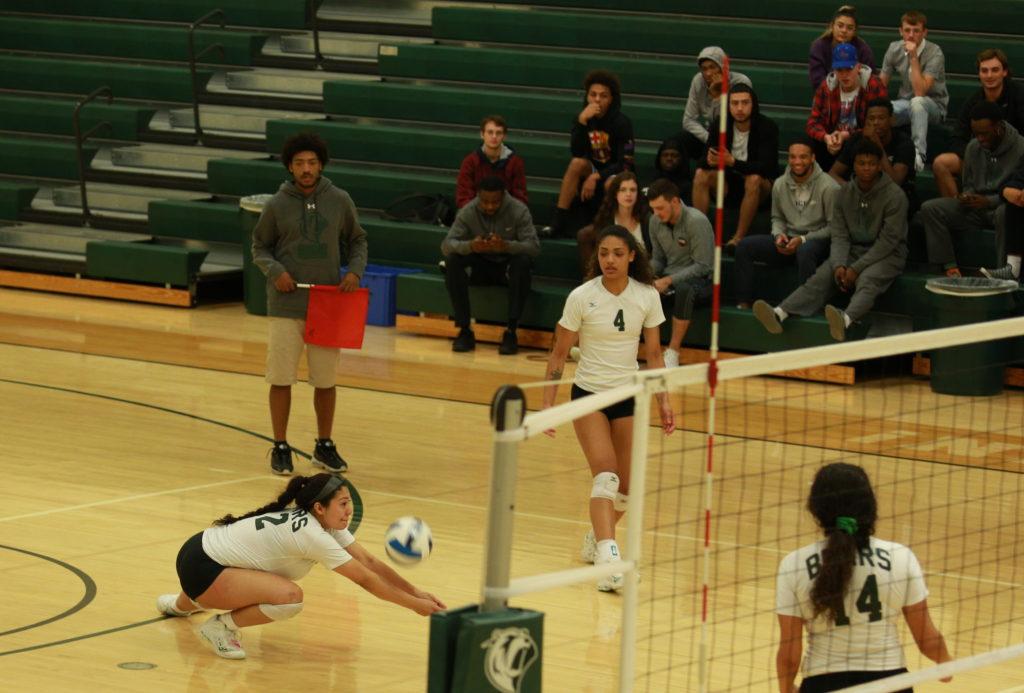 The Brookhaven College women’s volleyball team wrapped up conference play with a four-set loss Oct. 24 against the Eastfield College Harvester Bees. The matchup brought together the top two teams in the conference, and the Harvester Bees capped off the night to complete their undefeated record in conference play.

Brookhaven came out of the gate strong at home and started the set with a quick trio of points.

As the Bears continued to control the first set, they got to seven points before Eastfield was able to get back-to-back points to make the score 7-2.

The Harvester Bees were able to tie the set at 10-10 before they took the lead after Bears outside hitter Yasmin Miller and defensive specialist Fatima Paez dove into each other as they attempted to keep the ball in play.

Eastfield woke up from their slow start and took control of the set early. They took a 5-2 lead after they blocked a spike attempt from Zavala. The Harvester Bees stayed composed during the Bears’ early comeback attempt and Brookhaven head coach Jason Hopkins called a timeout down 13-8.

The Bears continued to battle their way through the match and eventually tied the set at 22-22. After an Eastfield score that gave them 23 points, Hopkins called another timeout. The Harvester Bees scored first out of the timeout and went on to win the set 25-22.

During intermission before the start of the third set, Hopkins told the team to take more chances on  the offensive end. At times during a match, chances lead to points and a team has to find cracks in the opposing defense to try and steal points when they can.

Miller recorded a kill for the Bears to tie the set 13-13, then Brookhaven took a one-point lead. The Bears maintained that lead after Eastfield shot one out of bounds. Then a big block by Bears middle blocker Faith Massey gave the Bears a 16-14 lead.

The Harvester Bees stung the Bears when they reclaimed the lead after Zavala couldn’t clear the net on a spike attempt. Brookhaven called another timeout down 21-19. As the set slipped away from the Bears, 25-22 was the final.

The fourth set was all Eastfield. The Harvester Bees flew away with a 25-13 set.

Hopkins has lofty goals for the team each year. Although back-to-back second place finishes behind Eastfield may not be ideal, it sets a standard and expectation for future teams and the Bears can be proud of what they accomplished this season.

“Despite a few injuries and whatnot, I think we finished off OK,” Hopkins said. “We were second overall in conference and we got a second-place seed [for the playoffs. So, all things considered, I think we did all right.”

The Bears will start their playoff run 7 p.m. Nov. 1, at Eastfield.