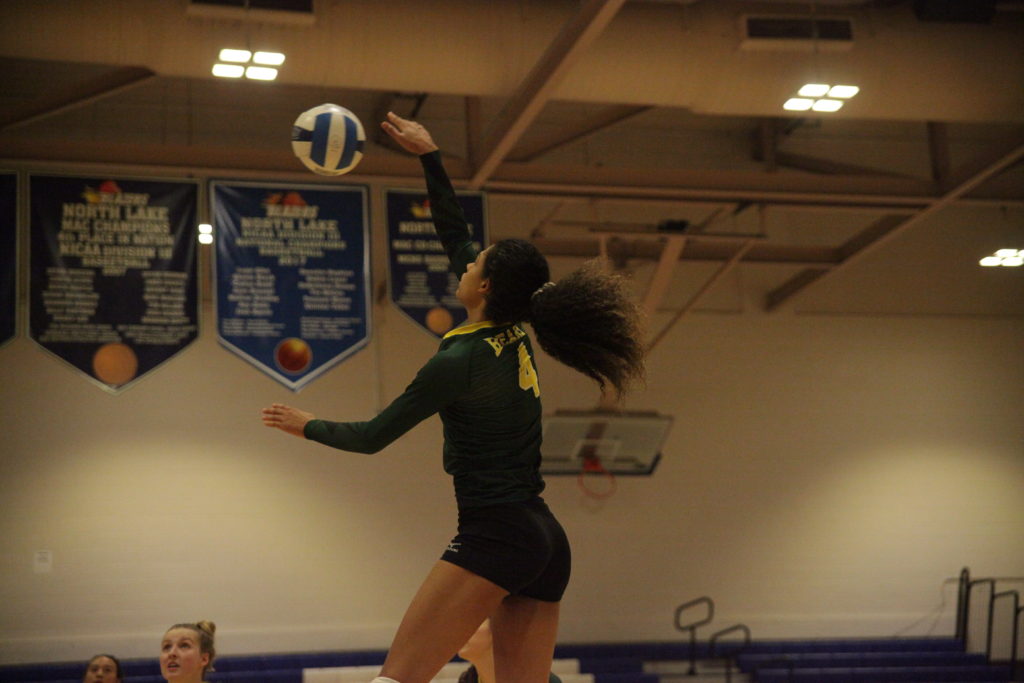 Brookhaven College fell in a five-set match Oct. 21 on the road against the North Lake College Blazers. Brookhaven lacked energy right out of the gate in the first set. With their 3-7 record in conference, North Lake is just focused on finishing the season strong. They caught the Bears in hibernation and the Blazers rolled their way to a 25-18 victory in the first set.

“We didn’t have any energy on the court at all,” Bears outside hitter Yasmin Miller said. “It was kind of dead the whole time. We only picked it up when we were behind.”

In the second set, the Bears jumped out to an early lead. A spike by Bears outside hitter Melanie Sullivan pushed Brookhaven’s lead to 11-7. Then, after a competitive volley, Sullivan smacked down another spike to give the Bears 12 points.

As the set started to slip away from North Lake, they called a timeout. Out of the break, Bears middle blocker Laurissa Zavala scored to give Brookhaven a six-point advantage. North Lake battled their way back into the set and tied it at 13-13.

Both teams exchanged points until the Blazers took a 17-16 lead over the Bears. North Lake stayed in control for the remainder of the set and pulled away. The final score of the set was 25-19.

The Bears offense continued to look sloppy and disorganized and hindered their scoring opportunities. Players seemed out of position and ran into each other on several different set points throughout the game.

The Bears started the third set down 3-1, but tied it 4-4. It was tied again at 9-9 before Zavala scored, giving Brookhaven the 10-9 lead. Then a serve by Bears defensive specialist Fatima Paez couldn’t be returned and the Bears took a two-point lead. The third set was a must-win for Brookhaven to avoid the sweep and they continued to fight their way through the uphill battle they faced.

The Bears took a 19-18 lead over the Blazers, but North Lake tied the game 21-21. Then Bears outside hitter Kaitlyn Wood floated the ball over the net and gave Brookhaven 22 points.

Miller chased down the falling ball out of the baseline to keep it in play. Then Bears left back Jennifer Moyer shot the ball over the net from midcourt without looking and Brookhaven finished the volley with the point. It was 24-22 and North Lake called a timeout. The Blazers scored back-to-back out of the timeout, but Brookhaven found a way to get to 26 points to win the set 26-24.

The fourth set was all North Lake early. The Bears started down 5-1, but tied the set at 10-10 after a point from Zavala. It was anybody’s game at that point. A lot of exchanged points and chants from the crowd led to the Bears 18-16 lead. North Lake called a timeout and the Bears let out a roar on their way to the bench.

After the timeout, Brookhaven scored first on a wildly entertaining volley. North Lake rallied to tie the set at 20-20 before taking a one-point lead. Then the dysfunction from the Bears offense continued to cause problems.

Moyer and Bears libero Cidnee Howard dove into each other while trying to keep the ball in play but were unsuccessful. North Lake was awarded another point then scored again on the next possession that made the score 23-20. The set had to be won in extra points again and Brookhaven pulled it out 27-25.

The Bears fought their way back into the match, but North Lake was the team that locked in and came out on top. For the third set in a row, it took extra points to win and North Lake secured the victory with a 19-17 closer.

This was a bad loss for Brookhaven and one they will have to hurry and move on from as the playoffs inch closer. Sullivan said they practice harder after bad losses and it might help with their focus down the stretch as they try not to let it happen again.