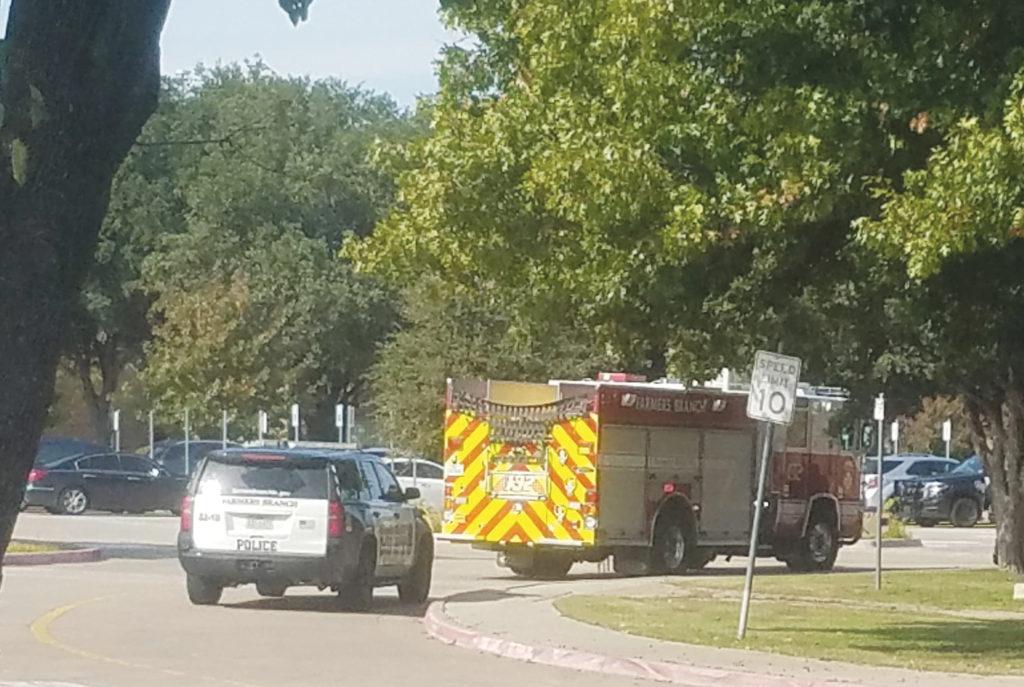 Brookhaven College students, staff and faculty were evacuated from campus due to a bomb threat Nov. 8.

Students, staff and faculty flooded into the parking lots at Brookhaven College Nov. 8. The sound of helicopter rotors soon filled the air.

Dallas County Community College District police and emergency personnel from the City of Farmers Branch conducted a security sweep after responding to a credible bomb threat found at Brookhaven.

Around 12:45 p.m. that day, students, staff and faculty received a DCCCD alert that read: “Brookhaven College — Bomb Threat. Evacuate campus by foot. Do not use a vehicle. If not on campus, STAY AWAY for own safety.”

A CBS News helicopter circled above Brookhaveans standing in the parking lots as law enforcement searched the campus.

Ashford said he could not say where the handwritten note was found because the investigation of the bomb threat is ongoing.

“The note basically said there was going to be a bomb,” Ashford said. “It didn’t specify where on campus. This is why the entire campus was evacuated.”

Law enforcement searched the building where the note was found and determined it to be free and clear of any explosives, Alex Lyda, DCCCD senior managing director of communications, said in a Nov. 9 districtwide email.

At 2:22 p.m. Nov. 8, a second DCCCD alert was sent out that read: “ALL CLEAR at Brookhaven College. Brookhaven College is closed for the remainder of the day and normal operations will resume tomorrow 11/9/19.”

In a districtwide email sent a few minutes after the alert, Meridith McLarty, Director of Public Information, said students, staff and faculty were allowed to return to the buildings to retrieve their personal belongings after the all clear notice was sent.

If someone finds a written bomb threat, they should not touch it, according to Brookhaven’s website.

If the threat is electronic, they should not delete it or forward it unless instructed by authorities to do so.

If a person finds a bomb threat, they should conduct a quick search of the area to identify any suspicious or unfamiliar items or packages, but should not touch any that they find, according to Brookhaven’s website.

They should touch any of the suspected items. In any of these circumstances, the person should call 911 on a district or college phone. If one is not available, they should dial District Central Dispatch at 972-860-4290 for help from the proper authorities.