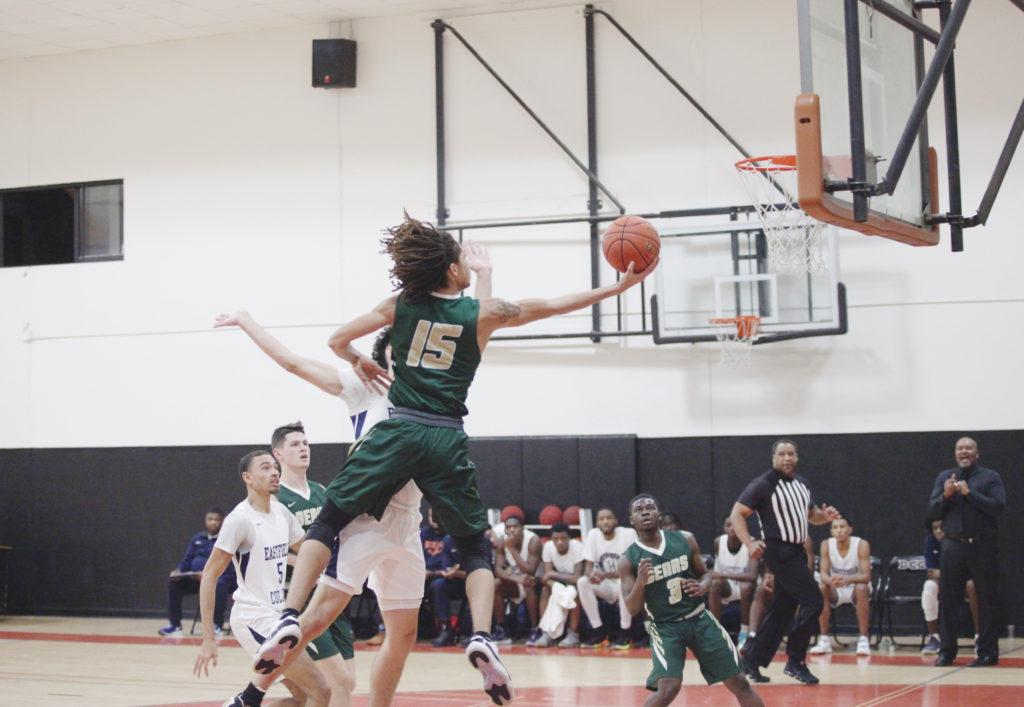 The atmosphere was that of a late season matchup. Both teams started the game fast. Brookhaven jumped out to a 14-10 lead, but called a timeout after an Eastfield turnover.

“Starting the game off, I felt like we had it,” Bears guard Mataio Irving said. “Then the second half came and we just went quiet.” Out of the break, the Harvester Bees tied the score at 18-18 with 10 minutes left after a contested layup from Smith.

Eastfield took the lead 25-22 before a midrange jumper brought the Bears within a point. After a Brookhaven timeout, the Bears reclaimed a 30-28 lead with five minutes left in the half. After another score by Bears guard Solomon Mitchell, Eastfield’s Smith weaved through the defense on a fast break and came with another point and the foul, but could not convert on the free throw.

On the next Eastfield possession, the Bears fouled into the bonus. Eastfield forward Mike Aranda hit both free throws to take back the lead for the Harvester Bees, but they only held it for seconds before Mitchell was fouled on a fast break score, but missed the free throw.

Brookhaven still led 34-33 with less than two minutes left, but could not hold on. At halftime the score was 36-36.

To start the second half, Eastfield took an early lead after back-to-back turnovers by the Bears. Only three minutes in, Brookhaven head coach Chris McGill called a timeout. Out of the timeout, they couldn’t get the ball in bounds and committed another turnover for the third straight possession.

The Harvester Bees continued to put pressure on the Bears’ offense, and after another turnover, Eastfield went up 53-39. Brookhaven called a timeout with 13 minutes left. The Bears were able to cut the lead to 9 points with 11 minutes left, but the Harvester Bees did not give much room for them to make a run.

Any hopes Brookhaven had were crushed after an alley-oop two-hand slam by Smith. That got the Eastfield crowd going, and the Harvester Bees took a 66-53 lead with five minutes left. The Bears got within 7 points with three minutes left, but were not able to stop Eastfield from scoring.

Irving said it was a tough loss considering it was a conference team. This loss, however, won’t count against the Bears’ conference record. They recorded 24 turnovers but only lost by nine points, so they will be confident when their record is really on the line.