Read a book, leave a book 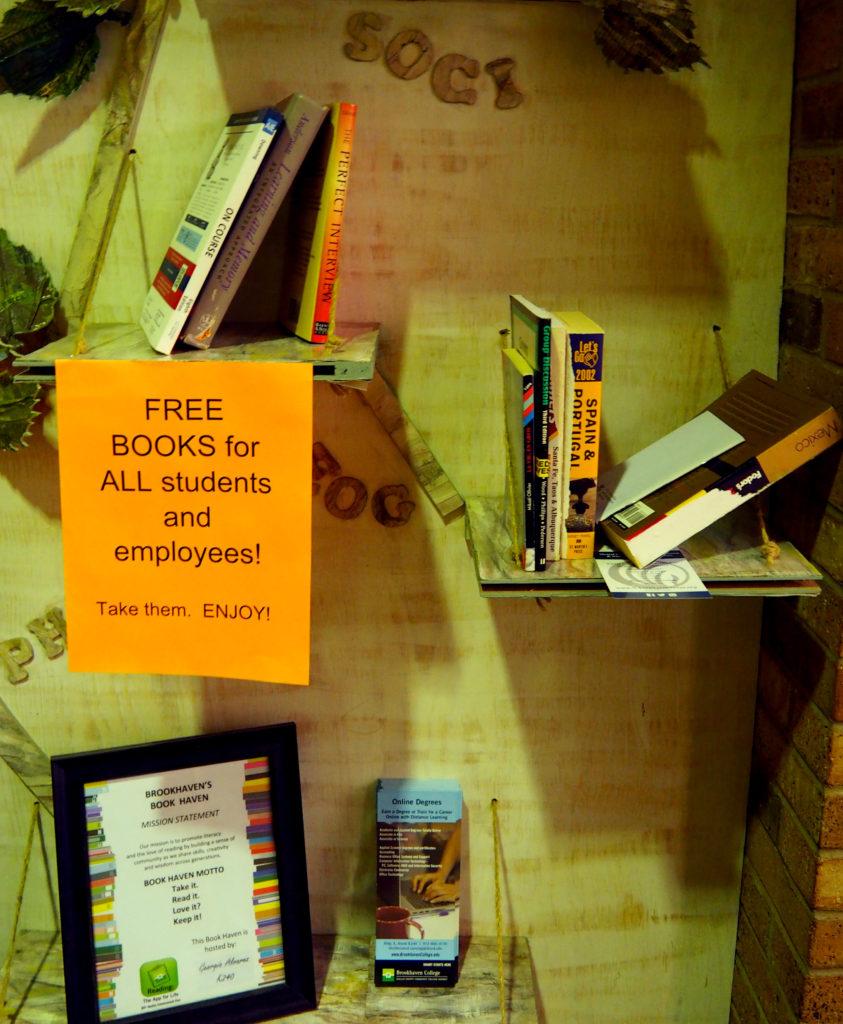 Photo by Kristian DominguezBook Havens can be found in many buildings around campus.

Little bookshelves are scattered all over the hallways of Brookhaven College. Some are tall and narrow, and others slung long and low.

A few are built in the shapes of trees, their limbs supporting books instead of leaves. One had a previous life as a New York Times newsstand, and another sports a windmill at its peak.

But different as their forms may be, Brookhaven’s Book Havens were all built with the same goal: encouraging students to read more. The books on the shelves are free for anyone to take and read, with no expectation of returning them.

The idea was born over 15 years ago when the Brookhaven Quality Enhancement Plan Advisory Committee, or QEP, was looking for a way to invite students to read more.

Brookhaven library receptionist and QEP member John Flores remembered a story he had read about a small town that did not have a library. The townspeople had created their own little library inside a phone booth so that they could share books anyway.

People left books in the booth for others to take. Flores wanted to expand on that idea and he wanted to place bookstands around campus to provide Brookhaven students with free reading material.

The idea didn’t see much development until the QEP met with the Southern Association of College and Schools, or SACS, the organization that accredits, or licenses, colleges all across the South, including the DCCCD colleges.

Once Flores mentioned the idea to SACS, everyone was on board. After Flores got the ball rolling, staff and faculty members built their own bookshelves and kept up with their maintenance.

The QEP hosted a contest to rename the project and settled on “Book Havens.” Five years after the program started, Flores said, statistics showed that more books were being circulated through the Book Havens than through the campus’ main library.

After the fifth year, the QEP stopped overseeing the project because their program for the libraries had run its course. Many of the Book Havens disappeared, students, staff and faculty kept others alive, and 14 continue to operate.

In fall 2019, journalism and photography professor Daniel Rodrigue decided to officially revive the Book Havens program as a project of The Brookhaven Courier. “I felt bad, because I knew they were a cool resource for students, staff and faculty on campus to pick up books and drop off books,” he said.

Rodrigue asked Rori Callaway, editorial consultant to The Courier, whether she would take charge of the program. She agreed, and got to work rebuilding the Book Havens. She contacted Half Price Books, which donated 10 boxes of books weighing about 50 pounds each, and has since emptied them onto the shelves around campus.

“I feel like it’s important to encourage reading for entertainment and not just as a chore or for work,” Callaway said.

“I’m hoping that more people will notice that The Courier has taken this on and that more people at Brookhaven will bring us donated items to include in the Little Libraries, because we can really use the community’s help in keeping those stocked,” she said.