Student journalists must not crack under pressure

Facing backlash from their community, students at The Daily Northwestern apologized for doing their job at a speaking event featuring former U.S. Attorney General Jeff Sessions. 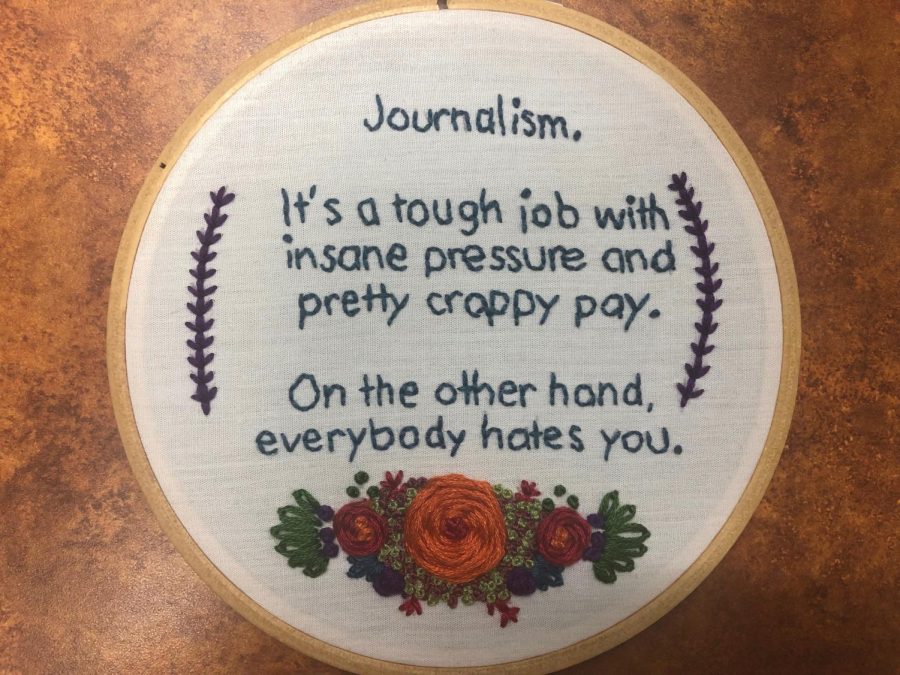 Photo illustration by Jacob Vaughn | The Courier keeps this hand embroidered design hanging on a wall in its newsroom to remind staffers journalism is not always easy.

Being a student journalist is a hard gig. We are always a part of the tightly woven college communities we cover, and we report on people we might run into any day. It can be hard for us to untangle ourselves.
When former U.S. Attorney General Jeff Sessions spoke at Northwestern University, scores of students were waiting to protest his appearance. Among the chanting crowd were two student reporters and a photographer from the college newspaper, The Daily Northwestern.
The student journalists covered the event persistently and in depth, but they did not win praise for their mostly favorable coverage of the protests.
Instead, the staff of The Daily drew heavy criticism from fellow Northwestern students for their decisions to quote one protester by name and share an image of another protester being handled by university police on social media.
Critics feared the university would use The Daily’s coverage to punish protesters. The staff’s use of Northwestern’s student directory – which is open to all students of the university – to contact protesters after the event also drew fire. Some students called it an invasion of privacy.
The staff removed the photos and names in question soon after publishing them. A few days later, under immense pressure from the Northwestern student community, the staff issued a controversial apology.
“Some protesters found photos posted to reporters’ Twitter accounts retraumatizing and invasive,” the staff wrote in its apology. “Those photos have since been taken down.”
Over the course of the event, The Daily photographer Colin Boyle tweeted at least 11 photos and later removed them. One depicted student Ying Dai sprawled on the floor, wincing as a university police officer wraps an arm around her.
“I was on the ground being shoved and pushed hard by the police,” she said in a tweet. “You don’t have to intervene but you also didn’t have to put a camera in front of me top down.”
The staff also said it removed the name of a student protester from its story to protect them from disciplinary action.

HARSH CRITICISM
But their situation only worsened.
Professional journalists from around the country and across the political spectrum tore into the apology, accusing the staff of failing to fulfill their duty to thoroughly and transparently cover the college community.
The first goal of a newspaper, according to The Dallas Morning News’ response to the apology, should be to cover the news without fear or favor.
In other words, while journalists must always weigh the consequences of publishing a story, their job is not to shield one group or another from the consequences of their own actions.
It is to provide full, accurate and transparent accounts of events, to act as eyes for their readers.
If the protesters did not want to be caught on camera, they should not have protested in public in the first place. If they did not want to be quoted by name, they should not have given a reporter their name and a quote.
If the university really is punishing students for merely expressing their point of view, not for trying to shut down others’, then it is the university that needs to change, not the newspaper.
Shooting the messenger is counterproductive. If it does its job correctly, the newspaper will cover that injustice, too.
Meanwhile, the practice of making available to all other students the contact information of any students who do not follow a poorly-advertised opt-out process is certainly outdated, as an opinion published in The Daily a week after the apology pointed out.

UNNECESSARY APOLOGY
But the protesters contacted through the directory were not obligated to respond, and a couple of polite phone calls or text messages hardly constitute harassment or an invasion of privacy.
The criticism toward the paper was sometimes rebutted with the justification that we use from time to time when we make mistakes:
We are student journalists, not professionals; we are still learning.
However, this excuse should be reserved for real mistakes, such as getting a person’s name, age or title wrong, not for impartially covering the community.
Still, the few publications that expressed sympathy for the staff of The Daily, including the Poynter Media Institute, were right to do so.
The staffers at The Daily should remember that being in journalism means that no matter how well you do your job, some people are always going to find some reason to hate you for it.
From one staff to another, keep doing what you were doing before this whole fiasco occurred, and preserve what it means to be a good and honest student newspaper.