– Part three of a three-part series on vaping – 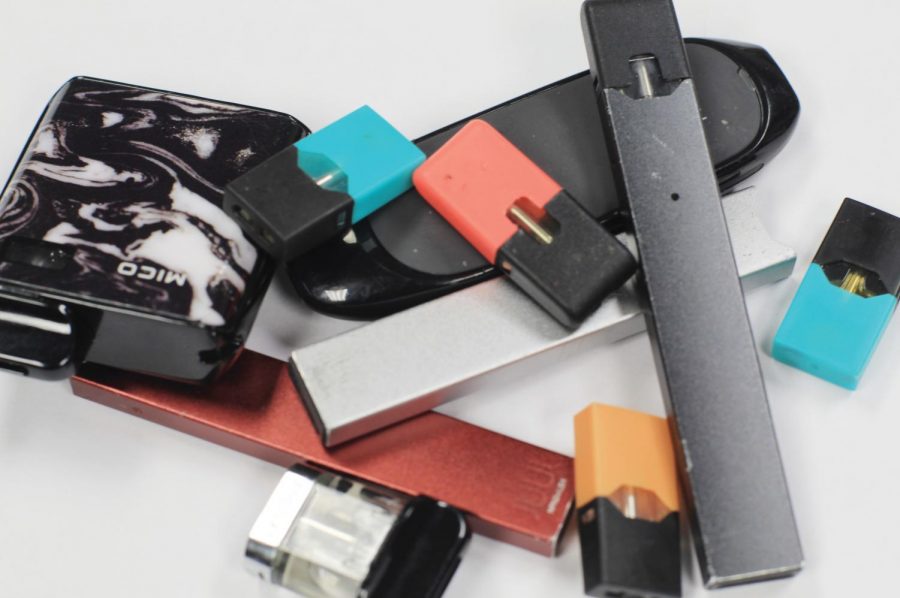 Photo illustration by Sam Mott | Eight states have implemented bans on e-cigarette use and talks addressing the vaping crisis have reached the federal level.

The jury is still out on the culprit behind the vaping crisis related to 33 deaths and over 1,400 cases of pulmonary disease across the country. While the Centers for Disease Control and Prevention conduct an investigation into vaping, some states, cities, companies and college campuses are taking the cautionary measure of implementing bans on the sale or use of electronic cigarettes.
One of the strictest of these bans was put in place in Massachusetts Nov. 24, according to The Boston Globe. Republican Gov. Charlie Baker signed a bill permanently banning the sale of all flavored tobacco products. Additionally, Kroger, Walgreens, Rite Aid and Walmart, including its Sam’s Club locations, have all announced they will discontinue the sale of vaping products, according to CNBC.
On Oct. 3, John Sharp, Texas A&M University chancellor, announced an e-cigarette ban affecting all A&M university campuses across the state, according to The Dallas Morning News.
At Brookhaven College, vaping is treated the same as smoking. Students, staff and faculty can only smoke and vape in parking lots beyond the fire lane, according to the 2019-2020 Student Handbook. “This includes, but is not limited to the use of chewing tobacco and electronic cigarettes,” the handbook reads.
If a campus police officer observes someone smoking or vaping in a prohibited area, they will notify them of the college’s policy and ask them to relocate, according to the student handbook. If a student continues to violate the policy, a report will be written and referred to the vice president of student affairs. For faculty, the matter will be referred to their supervisor.
So far, eight states have implemented some kind of ban on vaping, according to Time magazine. But the closest Texas has come to a statewide ban is its recent regulation that raised the smoking and vaping age to 21.
At the national level, a lot of the discussions about the vaping crisis have been centered around the sale of, and teenager attraction to, flavored e-cigarettes. On Sept. 11, President Donald Trump’s administration announced it was getting ready to roll out a federal ban on flavored e-cigarettes, which have reportedly entangled 5 million teenagers involved in the youth vaping epidemic, according to The Washington Post.
“The Trump administration is making it clear that we intend to clear the market of flavored e-cigarettes to reverse the deeply concerning epidemic of youth e-cigarette use that is impacting children, families, schools and communities,” Alex Azar, U.S. Health and Human Services Secretary, said in a statement, according to CNBC. “We will not stand idly by as these products become an on-ramp to combustible cigarettes or nicotine addiction for a generation of youth.”
However, on Nov. 4, Trump changed his mind, according to The Washington Post. Federal regulators cleared a ban on most flavored vaping products, but Trump refused to sign it. An anonymous Trump adviser told The Washington Post Trump worried the ban would cost people their jobs and slow economic growth. Currently, it is unclear when the administration will announce a new plan to curtail teen vaping and what that plan will look like.
While many criticized the president for his decision, some argue these bans may do more harm than good. “When flavored vapes are no longer available, many nicotine users won’t just quit,” Sally Satel, a resident scholar at the American Enterprise Institute, wrote in an essay for The Atlantic. “Instead, some will use cigarettes. Others will turn to the unregulated black market to continue buying fruit-flavored e-cigarettes, for which adult vapers as well as teens have a strong preference.”
Similar to e-cigarette use itself, only time will tell if vaping bans are indeed effective.