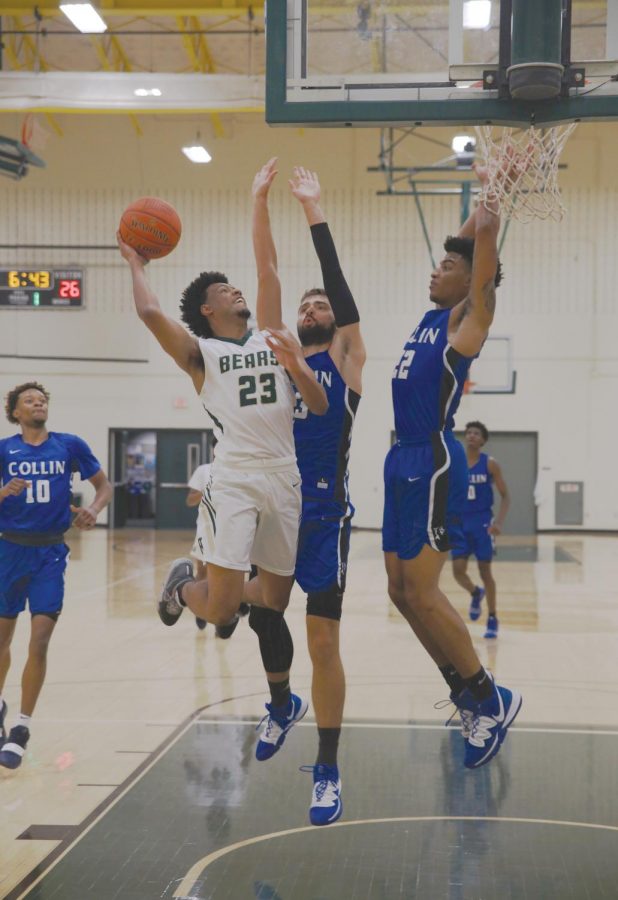 A late run for the Brookhaven College men’s basketball team was not enough when Collin County Community College came to campus Nov. 20. The Bears lost 79-68, even after outscoring the Cougars in the second half 39-35.

Bears head coach Chris McGill said he does not like losing, but said he found positives he could pull out from the game and learned about his team while trying to match up with their Division I opponent.

“I was really proud of our team,” McGill said. “In years past, other teams would have folded, and we didn’t fold.”

Collin County forwards Nighael Ceaser and Mason Hix both hustled their way to double-doubles. Bears guard Richard Juarez was 4-9 from the 3-point line and had 18 points.

The game was back and forth for a bit, but eventually the Cougars ran away from the Bears. The Bears had a 17-13 lead after a three by Juarez on an assist from Brookhaven guard Solomon Mitchell.

Collin County tied the game after a 3-pointer by Cougars guard Tim Denton, but on the next possession Brookhaven hit a three of their own to go up 20-17.

Ten minutes into the first half, coach McGill called his first timeout. McGill called another timeout with four minutes left after Collin went on a run and pushed the lead to 34-27. They set up a nice play and Brookhaven guard Osaze Muhammed rimmed out a shot from the 3-point line.

“The biggest thing that hurt us the most was a 7-minute stretch in the first half where they got on a run,” McGill said. “We stopped communicating defensively and we left guys wide open for threes.”

With the clock winding down, Collin County brought out the full-court press to try and create extra scoring opportunities for themselves. It did not have too much effect on the Bears’ offense, but they just could not slow Collin County down on offense. Fitzgerald-Warren swished in a three to push the Cougars’ lead to 39-27.

On the next possession, the Bears came up empty but the Cougars hit another three. McGill called his third timeout of the half with less than two minutes left to try to stop the bleeding.

Out of the timeout, Collin County’s press worked, forcing the Bears to turn the ball over after a trap near the half-court line. It was 44-29 at the end of the first half.

To start the second half, Brookhaven came out aggressive on defense and tried to fight the uphill battle. After back-to-back scores, the Bears cut the Cougars’ lead to 10.

Collin came out in a full-court press again, but Brookhaven continued to find holes in the pressure. Still, the Bears had trouble keeping the gap at 10 or less because they could not keep Collin County off the scoreboard.

With 10 minutes left in the half, Collin County stretched their lead back up to 15. The Bears cut it to 12 after guard Shawn Feggett was fouled on an up-and-under layup and went to the line to knock in both freethrows.

Collin County head coach Jim Sigona felt the pressure and called a timeout with 7:28 left on the clock as the momentum started to switch in the Bears’ favor.

Then, with five minutes left on the clock, Warren put the dagger in the heart of the Bears when he knocked down a contested 3-pointer from right in front of the Cougars’ bench.

He sized up Bears guard David Woosley and went up right over the top of him and swished it.

Brookhaven came down the court on the next possession and banged in a three of their own to get the Bears within 11, and then McGill called a timeout to try and lock the team in for the last part of the game.

Out of the timeout, Brookhaven cut the Cougars’ lead to 9 points after another three.

They couldn’t string together back-to-back buckets, and Collin County capitalized. Brookhaven got back within 9 points with less than two minutes left. Then, after Woosley forced a turnover, the Bears scored again to make the score 73-66.

The Bears couldn’t muster up enough offense to get it done, and Collin County stretched their lead back to 11 points by the end of the game. The Bears will play their next home game 5 p.m. Dec. 11 against Louisiana Christian Prep.