Brookhaveans get to know police over coffee 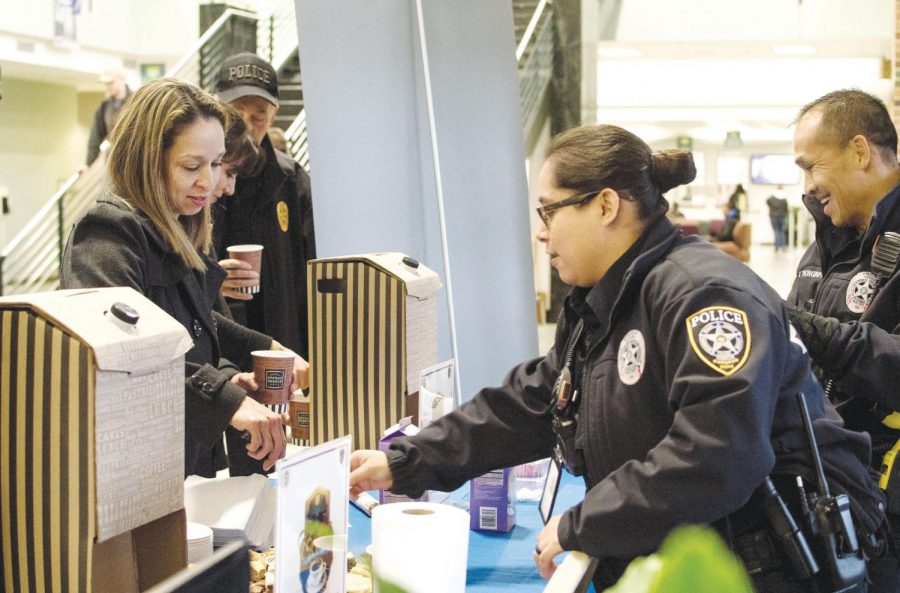 Photo by Brandon Donner Irma Martinez, (left) administrative assistant, socializes with officers while getting a cup of coffee in the S Building lobby during Coffee with a Cop Jan. 22.

Students, staff and faculty lined up in the S Building lobby to converse with uniformed police officers from the Dallas County Community College District Police Department over cups of hot cocoa and coffee at Coffee with a Cop. The event was held Jan. 22.

Coffee with a Cop is a semiannual event organized by the DCCCD Police Department. During the event, a police officer sat behind a table with coffee, cocoa and cookies. Students, staff and faculty approached the table and enjoyed their treats while the officer answered their questions.

Mark Lopez, Brookhaven College police commander, said the goal of the event was to keep students safe by helping students get to know the campus police officers and the services they provide. Despite its being geared toward the students, Lopez said the event was open to everyone on campus.

Axel Marungike, a student who works as an assistant to the Advising Center, said that in spite of this, not many students feel comfortable approaching an on-duty officer with questions, as there is a “bad-guy stigma” surrounding police officers.

Ashley Ortega, a student, said, “There is a small fear in everyone that you can’t approach the police unless you have a problem.” Dana Qatawneh, a student, said she feels there is no established relationship between students and the police department. Qatawneh said she had never interacted with a campus police
officer in her three semesters at Brookhaven.

How ever, Marungike and Ortega said they felt the event shifted this dynamic, providing a platform for open, casual communication between officers and Brookhaveans. Both agreed Coffee with a Cop gives the community a chance to inform itself without the typical pressure associated with approaching an authority figure. Marungike said it allows students to have better contact with
the police.

Ortega said: “I don’t feel comfortable talking to police. Doing this, though, I just casually chat to them.”

In addition to answering questions, the officers at the event encouraged attendees to download the Rave Guardian app to receive all emergency alerts sent by the police department.

Ortega and Qatawneh agreed they would come back to Coffee with a Cop. “Yes. Definitely,” Ortega said.  Qatawneh said yes too: “The [officers] are really nice. The[y] even wished me straight A’s.”