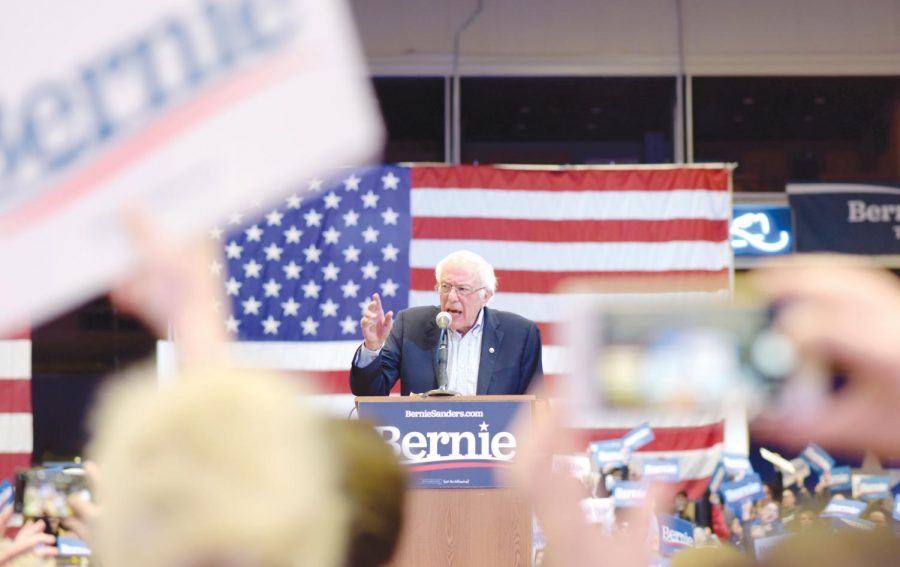 Photo by Brandon Donner At a campaign event Feb. 14 in Mesquite, Bernie Sanders, the frontrunner in the Democratic primary, says he will win in Texas, and later the rest of the country.

Over 5,000 people cheered and waved signs as Democratic presidential candidate Bernie Sanders stepped out from behind a curtain and made his way to the lectern at Mesquite Arena.

Sanders came to the rodeo arena in Mesquite, Texas after finishing strong in the Iowa caucus and New Hampshire primary elections in the two weeks before. And as he stood in front of thousands of Texans on Valentine’s Day, he seemed confident he would win the Lone Star State.

Sanders said there are people all across the country who do not agree with all of his policies, but that they also know they cannot let President Donald Trump continue to lead the U.S.

He said the president is trying to divide the American people. “He’s trying to divide us up based on the color of our skin, or where we were born, our religion, our sexual orientation, even our gender,” he said. “We’re gonna win because we’re bringing our people together. Black and white, Latino, Native American, Asian American, gay or straight – we are all Americans. We are gonna stand together. We’re gonna beat Trump. We’re gonna transform this country.”

The Vermont senator went on to say Trump is a corrupt, pathologically lying, racist, sexist, homophobic xenophobe and religious bigot who may have never read the U.S. Constitution. But Sanders said his campaign is facing not only Trump, but also the Democratic establishment.

Trump has called Sanders a communist, and his left-wing opponents have expressed concerns about his identification as a democratic socialist. However, Sanders said his policies, such as Medicare for All, abolishing private health insurance and taking on the oil and gas industry, are what Americans want.

Soraya Colli, a Dallas community organizer and activist, said her support for Sanders is about the overall message of his campaign.

“I am the daughter of an immigrant and I believe the country my mother hoped would be here for her, and the better life she wanted for her daughters and her family, is not something that has managed to happen yet,” she said. “With Bernie, I hear that hope in a way that I haven’t my entire life. I want that world for my children. I want to fight for that world for me.”

She said she feels Sanders’ campaign has been written off as a youth-led movement, but that this hasn’t been her experience at all.

“First of all, I’m not a kid. I’m 46 years old,” she said. “I have followed campaigns and been an activist for years and I have never come out for a candidate like I have for Bernie. I really believe this is our time. This is a message that is going to get us through November. I firmly believe that, and I’m going to continue fighting until everyone else believes it.”

Sanders is currently the frontrunner in the Democratic primary and leads the race for the nomination in the state, according to a University of Texas/Texas Tribune poll published the day of his Mesquite event. Since his stop in North Texas, Sanders has held campaign rallies in El Paso, Houston, San Antonio and Austin.

After his win in the Nevada caucus, Sanders made political history, by becoming the first candidate, Democratic or Republican, to win the popular vote in all three early voting states.