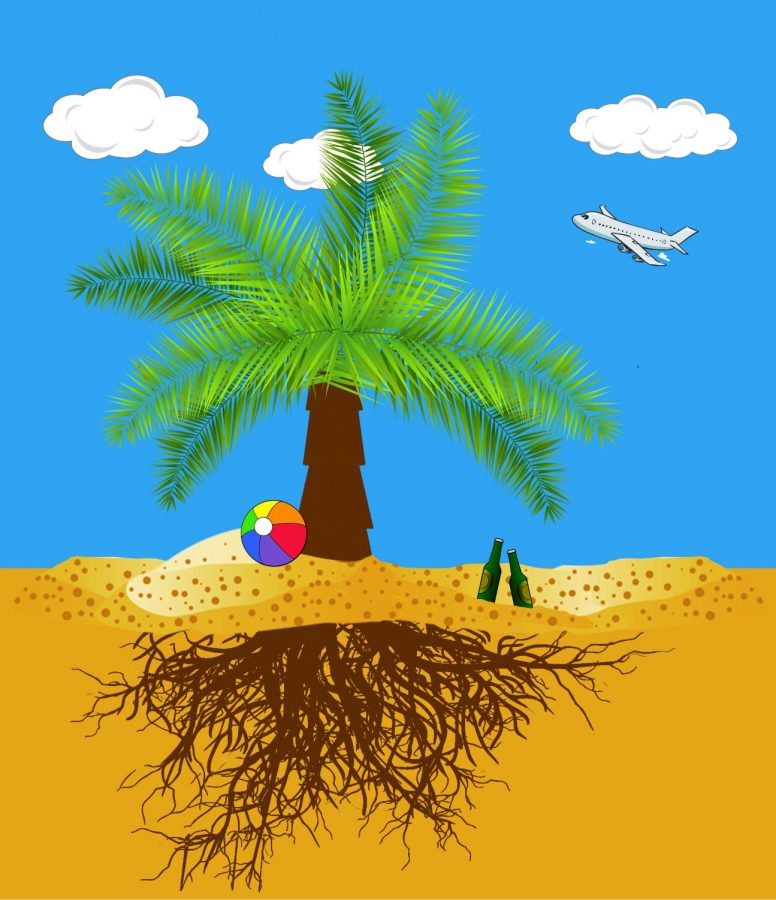 College students everywhere know one particular week of the year is the perfect excuse for a little – and often too much – fun: spring break. The overindulgence associated with the spring season is nothing new.

Spring break can be traced back to Greek and Roman celebrations of spring. In ancient times, the spring season symbolized fertility, rebirth and abundance. Spring festivities in Greece and Rome honored Dionysus, or Bacchus, the god of wine and pleasure, and involved debauchery and intoxication, according to TIME magazine.

However, the modern American spring break has its beginnings in the 1930s in a sleepy town’s pool.

In 1936, Sam Ingram, swim coach from Colgate University, was looking for a place to keep his swimmers in shape during the then-called Easter vacation. He traveled with his swim team from the northeastern college to Fort Lauderdale, Florida, to practice at the Casino Pool, the state’s first Olympic-size pool.

In 1938, wanting to boost the town’s economy, Fort Lauderdale hosted the first annual College Coaches’ Swim Forum at the Casino Pool. Swimmers from all over the country were encouraged to make their way to Fort Lauderdale to compete in the event. Over 300 swimmers attended the competition that year.

During World War II, students who usually vacationed abroad kept their spring vacation plans domestic due to rumors of German U-boats prowling the Caribbean. As a result, the number of attendees at the forum increased.

Due to the sudden influx of tourism, spring break began to move beyond the Casino Pool and onto the beach. Sensing an economic opportunity, local businesses began selling cheap alcohol.

In 1959, TIME published its first spring break story, “Beer & the Beach,” on this aspect of spring break culture.

The annual swim meet continued into the ’60s.  The event gave hundreds of college students an excuse to flock down to Fort Lauderdale for Easter vacation.

As spring break gained popularity, it began seeping into mainstream and pop culture.

Inspired by his trip, Swarthout wrote the blockbuster book “Where the Boys Are.” The book follows four college girls as they navigate the world of boys while on their spring vacation, capturing the culture surrounding spring break. Soon after the book was written, it was adapted into a film of the same title. The 1960 movie was promoted using the Connie Francis song “Where the Boys Are,” along with the phrase “spring vacation,” known until then more popularly as Easter vacation. The movie was later remade in 1984.

The success of “Where the Boys Are” in pop culture caused Florida to rocket to the top of the list of popular spring break destinations. According to The New York Times Magazine, after the release of the movie in 1960, the number of college vacationers traveling to Florida’s beaches shot from 20,000 to 50,000.

By the ’80s, the once-sleepy town of Fort Lauderdale was stretching at the seams trying to accommodate the annual influx of visitors. According to The New York Times Magazine, in 1985, the number of students vacationing in Fort Lauderdale was around 370,000. The city tried to discourage vacationers by passing stricter laws against public intoxication, which pushed spring breakers toward other destinations in Florida, Texas and Mexico.

In 1986, MTV launched its first spring break special, reaffirming spring break’s reputation for excessive partying and drinking. The program was broadcast from Daytona Beach, Florida, and showed featured swimsuit-clad students drinking and dancing. It also featured popular musical performers such as the Beastie Boys and Starship.

In response to the growing association of spring break with risky activities, the American Medical Association began warning spring breakers of the dangers of engaging in binge-drinking, drug use and unprotected sex.

Spring break culture is still a key aspect of college life. In an email to The Courier, Mitzi K. George, adjunct professor of psychology at Brookhaven College, said the tradition continues because many of the activities associated with spring break bring immediate reward and pleasure to the students. This, she said, motivates future generations to follow, seeking the same reward experience as their predecessors.

Apart from being a thrill-seeking experience, George said spring break is important from a mental health perspective. “Our minds also need to escape from the daily routines and ordeals that face each of us,” she said. Spring break has positive effects on student behavior while school is in session, as it allows students to make a conscious effort to rest and refuel. She said, “[It] can be a way of clearing out some of the unwanted, damaging or intrusive thoughts and worries that occur on a daily basis.”

Today, spring break continues to be an unofficial American college tradition. The wild antics spring has heralded since Greek and Roman times continue to be faithfully honored by college students every year come springtime.

1960 – Swarthout writes the bestselling book “Where the Boys Are.”

1960 – “Where the Boys Are” is adapted into a film featuring a Connie Francis song by the same name.