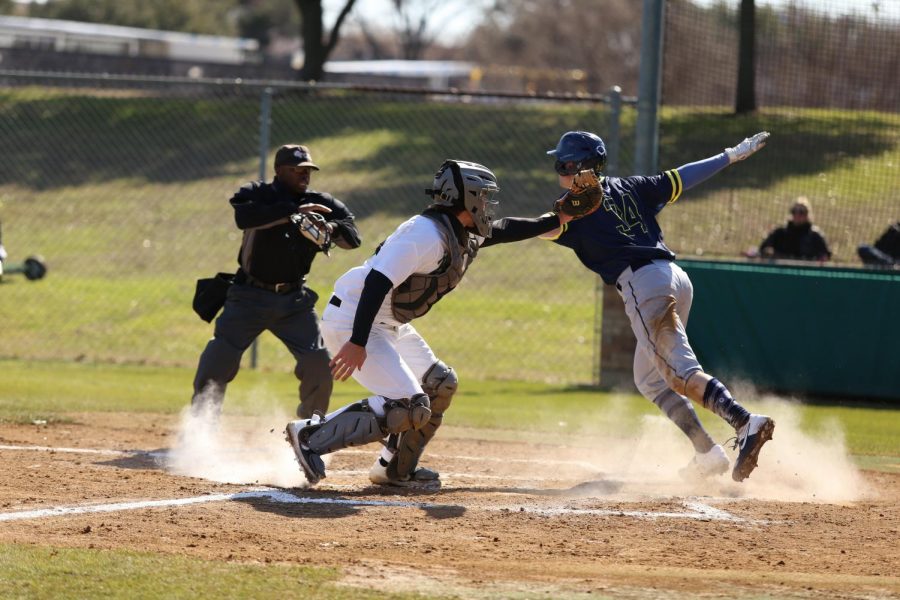 Photo by Brandon Donner Bears catcher Jase Jones (#15) stretches to try for the out at home plate.

The Brookhaven College men’s baseball team waited an extra day to play their home opener against the Johnson County Community College Cavaliers thanks to Mother Nature. With the wait over, both teams took the field Feb. 6 for a double-header face-off. The Bears took a 10-5 loss in the first game and a 7-6 win in the second.

The Bears first sent left-handed pitcher Trevor Gracey to the mound to square off against the Cavaliers’ Zane Barr.

Gracey was off to a strong start with a lead-off strikeout, but the Cavaliers’ Brendan Ryan trotted to the plate and tattooed a ball labeled for the Luby’s dining room just west of the Bears diamond, giving Johnson County a 1-0 lead. Gracey never found his footing in the game. By the third inning, the wheels came off. The Cavaliers would plate three more runs, courtesy of a bases-clearing double from Isaiah Cohens, sending Johnson County up 4-0.

The Bears attempted to claw their way back into the game. With the bases loaded in the bottom of the third, Bears Chase Cos cut the Johnson County lead to 4-1 by driving in Jonathan Boyer. But the Bear’s threat ended shortly after that.

Johnson County added three more runs – one in the fifth and two in the sixth. The Bears added a run of their own on the scoreboard in the bottom of the sixth.

The score was 7-2 at the top of the seventh, and the Cavaliers continued to break the game open with three more runs. Down to their last three outs, the Bears looked to mount a comeback, but fell short. The Cavaliers beat the Bears with a final score of 10-5.

In the second game, the Bears plated two in the bottom of the first inning, but the Cavaliers came back and tied the game in the top of the fifth. Brookhaven responded with a run of their own in the fifth inning, giving them a 3-2 lead.

Johnson County came alive in the sixth and seventh inning, plating three runs to give them a 5-3 lead over the Bears heading into the final two innings.

The Bears plated four more runs in the bottom of the eighth to give them a 7-5 lead. The Cavaliers did not make it easy for the Bears, cutting the lead to 7-6 in the ninth inning before the Bears ground out the victory. As of press time, Brookhaven holds a record of 2-2.