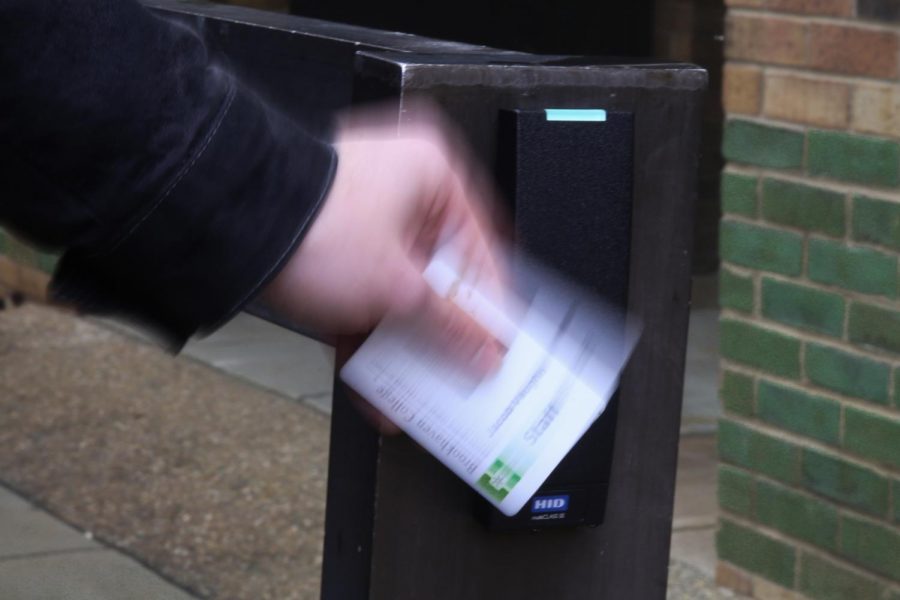 Photo illustration by Xochitl Gonzalez A move to a new district-wide security system caused many staff and faculty members’ keycards to briefly stop working, and others to gain more access.

Around 7:30 p.m. on Feb. 3, Jamileh Stroman, English for speakers of other languages professor at Brookhaven College, was getting ready to teach her night class. She arrived outside Room T308 and waved her keycard past the reader the way she had earlier that day and had been doing for many years. The lock beeped, but nothing happened.

The door did not open. She tried other doors in the hallway, but the result was the same at each one.

Her class of 12 soon arrived and crowded the hallway outside the door.“We waited about 20-25 minutes in the hall, which took class time out, and somebody came and opened the door,” Stroman said. “The students that I had that night, they’re coming from work, and we shouldn’t be eating up 30 minutes of their class time when they’re trying to get here from work and make some progress,” she said. “So I wasn’t happy about it.”

All the locks in L and T buildings, Mark Lopez, Dallas Community College District police commander for Brookhaven, said, had locked down by themselves at around 2 p.m. that day. “[I] Didn’t know why, didn’t know what happened,” he said.

“Our police station is very good about coming and opening things,” Stroman said. “It’s just that there are only so many of them.” After the incident that night, Stroman said, the police told her to call them 20 to 30 minutes before she would need to get into a classroom so an officer could be there to open the door for her. “And I said, ‘Well, I can’t do that, because I teach classes back-to-back,” she said. She would have to end her class early, call the police, then wait outside the door to her next classroom, she said.

The next morning Stroman went to the police office and Lopez made her a new keycard, she said. But the new keycard did not work either. So an officer had to come to open the door for her first class again. She said a sergeant took the new card and gave it back, and that afterward, it worked.

Jennifer Hernandez Benitez, student government association president, said that near the end of the fall semester, one of her professors had a similar problem. To get into classrooms, her professor had to fetch another professor, who stopped teaching for a moment to open the door.

A feature called the double-swipe, which allowed faculty and staff to leave a door unlocked until the doors’ automated schedules locked them again, also stopped working.

Lopez said keeping doors shut makes lockdowns safer and easier. “But I understand that it messes with class time,” he said.

Stroman said: “The police department was very kind, very cordial. Like for Mark Lopez, it was not in his control. I mean, he did what he could do. And so my question … was, ‘What’s going on? Who can tell us what’s going on?’”

ONE COLLEGE, ONE DEPARTMENT

Lopez said staff and faculty started reporting that their badges were not opening doors they were supposed to in early December.

That was when district staff began to transition Brookhaven’s access control system to a new software platform.

Until the departments merged in 2016, each college had its own police department. Afterward, each college still had a separate access control system. “We had five different video platforms and seven different access control platforms,” Steven Evans, DCCCD’s managing director of public safety, said. “In some cases, a campus had more than one, depending on the age of the buildings.”

But now that the district has a single police department and is moving toward becoming one college, Evans said, it is moving all of the locks and security cameras onto a single, centralized software platform for every campus in the district.

Brookhaven’s old system, Evans said, had multiple schedules that controlled when doors automatically locked and unlocked. Those were combined into a single, standard schedule.

The Brookhaven system’s old access database, which kept track of which keycards had permission to open which doors, was incompatible with the new software.

The database in the new software had defaulted to a general-access system, allowing any keycard to open any door.

That, Lopez said, was why the Courier staffer had been able to access more places than he should have been able to.

Evans said each college president had been directed to provide the police department with lists explaining which people needed access to which rooms.

“The administration is being presented with thousands of contacts on there, and they’ve got to tell us … whose permission levels are being adjusted,” Evans said.

But Lopez said the district did not tell the Brookhaven police office that in the new system, every door allowed general access unless it was programmed otherwise.

“We found out by ourselves,” Lopez said. He said they first became aware of the issue when someone from the Business Office called to say someone without the proper access permissions had come into their work area.

“It was a surprise because we started getting reports from the Business Office and from other areas – ‘Hey, all these people have access,’” he said.

In response, Lopez identified high-risk and high-security areas – such as the human resources department, the Business Office and chemistry and biology labs – and had district technology staff remove the general access permissions one area at a time. He said no areas allow general access anymore.

On top of the general access problem, Lopez said many keycards had simply fallen out of the system during the transition, which is part of the reason some staff and faculty members had to have their badges replaced.

“Every new program can have some sort of glitch, and you’re going to work out the problems and bugs and so on,” Lopez said.

Most of the issues should be resolved now, he said. “Slowly, but surely, we’re fixing each piece,” he said. “I think most of the bugs and keys should be worked out.”

Lopez said if staff or faculty still have problems with their badges, they should call or e-mail him, and he can restore their access.

Stroman said: “I was very happy how they treated me in the police station. I understood that it was out of their control. But if the district is going to impose something, they need to understand what the repercussions are if they have not worked it out.”`