Vinyl Countdown: a rollercoaster year for the industry 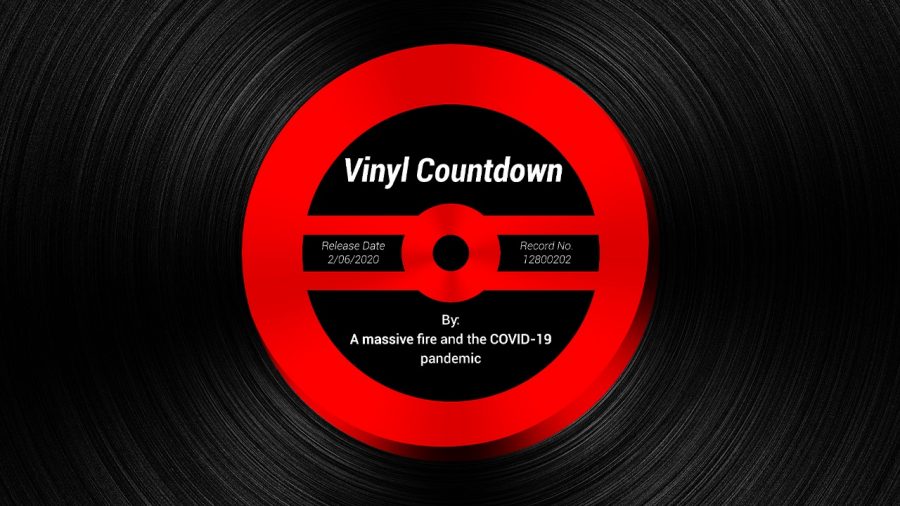 Illustration by Jacob Vaughn On Feb. 6, the Apollo Masters Factory in Banning, California burned down. The fire and now the COVID-19 pandemic have made 2020 especially rocky for the vinyl industry.

By March 21, at least 120 record stores closed because of the coronavirus, according to Billboard. But despite record sales being up 45%, the vinyl industry was having a rough year even before the COVID-19 pandemic.

On the morning of Feb. 6, flames engulfed The Apollo Masters Corp. factory in Banning, California, according to Billboard. The blaze ripped through the facilities, leveling them to a burnt crisp. Apollo Masters was one of only two companies that produced the vinyl master lacquers in the world, the other is MDC in Japan.

Lacquer is an acetate disc that music is stamped onto to create a record. The Vinyl Factory Magazine’s Anton Spice calls lacquer the physical bridge between recorded sound and a finished record. And now, due to the massive Apollo Masters fire, there is a global lacquer shortage.

Gil Tamazyan, the founder and president of vinyl pressing plant Capsule Labs, told Billboard he estimates Apollo Masters covered about 80% of the worldwide demand for lacquer film. No one was harmed in the fire, but now everything is up in the air for Apollo Masters.

In an email to Pitchfork, Ben Blackwell, Third Man Records co-founder, said: “From my understanding, this fire will present a problem for the vinyl industry worldwide. There are only two companies that make lacquers in the world, and the other, MDC in Japan, already had trouble keeping up with demand before this development.”

Addison-based Hand Drawn Pressing’s Gabe Buentello said he did not think the fire will affect his company as much. “It’s devastating for sure,” Buentello said. “Being in the industry, you hear rumors and fear of this day, but at the same time try to prepare accordingly. We have a decent supply of lacquer at the ready, but that will only last so long.” With one manufacturer left, Buentello said everyone will feel the effects of the fire.

Vinyl collector Chip VanPelt at ZT Records in Frisco said, “I’m not too worried about the shortage that they say will happen. There are so many presses already in circulation including the European market ones.”

Phil Ramirez, owner of ZT Records, said, “It’s scary as a small business owner in the industry.” However, he said he will continue to monitor the shortage so he can be ready for whatever comes next.

Josey Records, off Lyndon B. Johnson Freeway in Farmers Branch, is in the midst of a 10,000-square-foot expansion which will make it the largest record store in Texas, according to D Magazine. When the expansion is complete, Josey Records will also be among the top five largest record shops in the country. Kevin Myers, longtime staff member at Josey, said he thought the impending lacquer shortage would affect not only the industry, but the upcoming expansion.

Myers said he never wanted to see the industry hit this hard, and he is confident it will bounce back. “Looking at the comeback we’ve made, and knowing the resiliency of the community, they won’t allow it to affect people,” he said.

Efforts are already underway to help combat the shortage. Vinyl Alliance is a new group that has formed to help strengthen the position of vinyl records in a digital world. Günter Loibl, Vinyl Alliance president, said in a press release that the shortage could also be an opportunity to turn to new technologies. Loibl said, “Alternatives are already available that will help bridge the shortage.” Loibl is also the head of Rebeat Innovations, the company that developed HD Vinyl.

With this technology, cutting gravers and lacquer foil are replaced by laser engraving. Another alternative to lacquer foil is direct-to-metal mastering, or DMM. Further, according to the Vinyl Alliance, some start-ups were planning to produce lacquer discs. Only MDC in Japan makes them for now. And MDC has rationed supplies in order to reach as many pressing plants as possible with limited resources.

Scott Hull, mastering engineer in New York, said in a Vinyl Alliance press release that he is remaining calm. “For the time being, we have to be more careful with how we use lacquers, but I doubt that the consumer will feel the shortage before our industry will come up with a solution,” he said.

Some are saying there will be closures of plants or scaling back of production. A Toronto-based vinyl pressing company, Duplication, tweeted, “I predict vinyl pressing turn times will go back to being 6 to 9 months!”

As the vinyl industry works to bounce back from the lacquer shortage, it must also temporarily adapt to operating during a pandemic.

With shelter-in-place orders in effect in Texas, ZT Records has been holding Facebook live auctions on stock. One sales representative for a CD manufacturing plant told Billboard: “The absence of vinyl records for several decades wasn’t a death sentence for that format. The landscape of who’s left and what they do will surely change, but that doesn’t mean there won’t be other ways to twist a pipeline to get consumers what they want.”