The Brookhaven Courier • May 11, 2020 • https://brookhavencourier.com/105958/campus-news/sga-vice-president-speaks-at-summit/ 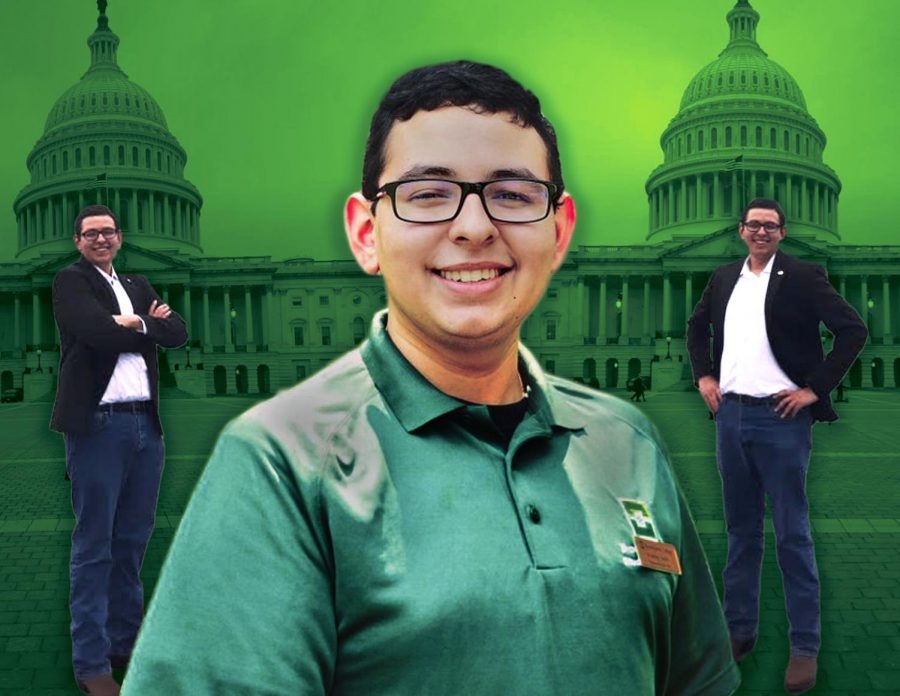 Brandon Valdez, Student Government Association vice president, was selected to attend the 2020 College National Legislative Summit Feb. 9-12 in Washington, DC. The National Legislative Summit brings together over 1,000 community college students and leaders. The summit shines a spotlight on the importance of community colleges across the nation to members of Congress and the government.
Valdez was one of four students selected to represent the Dallas County Community College District at the summit. He was joined by three students from sister colleges, El Centro College and Richland College.
Valdez said it was important for him to advocate for community colleges. “As great as a four-year institution education is, ultimately it comes at a higher price to the students,” Valdez said. “You can get the exact same quality education at your local community college for a fraction of the cost.”
During the summit, Valdez spoke with Texas Congress members Collin Allred and Eddie Bernice Johnson.
Valdez said he pushed the members to continue policies that were already in place and to expand others. “We wanted to get the Higher Education Act reauthorized,” he said. “We also wanted to make sure that Second Chance Pell which would help formerly incarcerated individuals obtain a college education is something that eventually happens.”
He said he jumped at the chance to speak in front of congress members. “I wasn’t nervous at all,” he said. “Ultimately, Collin Allred and Eddie Bernice Johnson, or any member of congress, they’re just a person like you and me. It wasn’t much of me trying to convince them to try and support a policy or support a specific piece of legislation, but more of a conversation.”
Valdez said when he arrived in Washington, he had to hold back tears. “I was so overcome with emotion, because of the fact that I was in the nation’s capital,” he said. “I was in the home of one of the greatest democracies on the face of the earth. And so, it was very humbling.”
Over the course of the three-day trip, Valdez attended various seminars given by members from political publications and said he was most impressed by a seminar given by Charlie Cook from The Cook Political Report. “He was my favorite speaker,” Valdez said. “He basically contextualized the last election and talked about how we need to go back to the drawing board because Trump’s victory caught everybody off guard.”
Nancy Muniz, SGA events coordinator, said she was inspired by Valdez’s trip to Washington. “When you see somebody else do it, you’re so happy for them, and you think if he could do it, then I can do it,” Muniz said.
Aside from attending seminars, Valdez also toured historic sites in D.C., such as the Martin Luther King, Jr. Memorial, The Washington Monument and The National Library of Congress.
SGA public relations officer Liliana Menjivar said when their adviser offered the SGA members the opportunity to apply for the trip, she thought it would be best suited for Valdez. “I was proud that he got the chance to represent Brookhaven and SGA,” she said.
Valdez said one of the biggest takeaways from the trip was being able to collaborate with other schools. “Eventually, we will become one college and it’s important to build relationships with students from other colleges because what affects Brookhaven will eventually also affect Richland and the other colleges,” he said.

Despite the campus being shut down due to the coronavirus, Valdez said he is still performing his SGA duties. He said, “We’re conducting virtual meetings to make sure the elections run as smoothly as possible, and we’re making progress on our award entries that we’ll be sending to the Texas Junior College Student Government Association to try and bring in a couple of awards for Brookhaven and DCCCD.” This will be Valdez’s last semester as a part of SGA as he plans to graduate this spring.