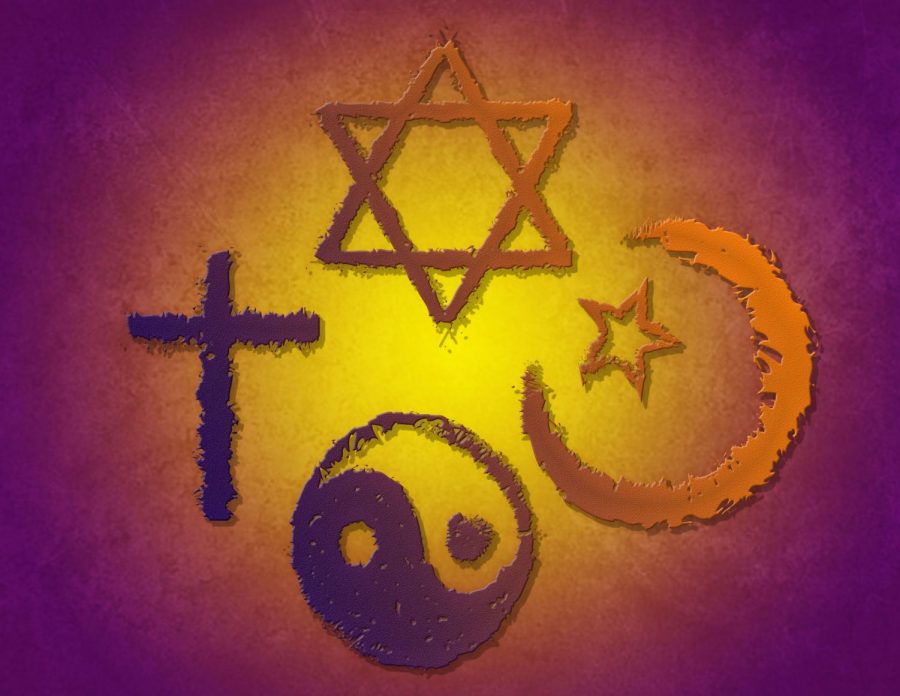 Illustration by Eriana Ruiz As religious establishments are asked to not gather due to the COVID-19 pandemic, some are moving online while others go against the orders.

As COVID-19 continues to spread, many people are looking to religion to find solace and peace. However, many people across the U.S. have chosen to ignore safety guidelines by attending church and hosting large religious gatherings. Continuing to do this is foolish and could potentially harm people.

Dr. Christopher Grice, Brookhaven chair and professor of sociology, said he thinks religious observers are having a hard time social distancing and following CDC guidelines because of society and culture. “From a sociological stance, culture is an umbrella term for how people live and interact,” he said. “Spiritual and/or religious beliefs and practices are one aspect of culture.”
Grice said a health crisis, the inability to gather, restricted movement, reduction of services, misinformation and economic uncertainty prompt the average person to seek comfort.
He said some people seek comfort by following the 24-hour news cycle, binge-watching TV or holding onto faith and religion. “I believe for some, the sense of normalcy outweighs potential risk,” he said. “For others their faith may not frame it as a risk.”
Some churches have opted to operate despite the looming possibility of spreading the virus. According to the South China Morning Post, a church in South Korea sprayed saltwater into worshippers’ mouths telling them it would prevent the spread of coronavirus. The church did not make an effort to switch or disinfect the spray bottle after each usage and it resulted in 46 people being infected.

Tony Spell, a pastor in Baton Rouge, Louisiana, was arrested and charged for a second time for ignoring public orders against having large gatherings. Spell held church services to hundreds of church members according to CNN. Despite being charged, Spell said he still plans on having Sunday service. “We have a mandate from God to assemble and to gather together and keep doing what we’re doing,” he said. Spell is not setting a good example for his followers and could potentially be exposing them to the virus.
According to KCTV 5, a news channel in Fairway, Kansas, some religious leaders in their community have had success by using online methods to connect with church-goers. Church of Resurrection Leahwood has been holding service via live stream and has doubled its weekly audience, according to Senior Pastor Adam Hamilton. Dan Entwistle, senior executive for the church said he understands why people believe religious faith could save them from the virus but believes in giving credit to science because some scientific information didn’t exist when the biblical text was first introduced. “If we are expecting God to protect us despite the risks that we put in front of ourselves, then instead of us becoming agents of healing in the community, we can actually become agents of harm by infecting others because of the risk that we’ve chosen to take,” Entwistle said.
More religious leaders should look at the way the Church of Resurrection Leahwood has handled church proceedings for an example of good leadership.
It is extremely irresponsible for churches to continue to encourage mass gatherings when it could potentially harm church-goers. While it is an individual’s decision to attend services, the church could step in and guide people to stay home. Church-goers deserve better treatment. They deserve houses of worship that care about them enough to put their safety first.
It is understandable to exercise your faith during difficult times, but it is also important to keep each other safe by listening to health officials. Until we get the coronavirus under control we should encourage people to practice their faith at home and host church services online.

Briana Rosas, a student, said the churches she attends decided to suspend all in-person gatherings to protect the priests, staff and church-goers. Rosas said she feels it is irresponsible for churches and worshippers to hold gatherings. “They’re not putting the need, and the safety of their followers first,” she said.
I wouldn’t consider myself a religious person. I do not judge anyone for seeking out religion to aid their mental and spiritual health. In times like these, we must make wise choices as to how we go about practicing faith. We have already seen the effects of downplaying the virus, and the cost is deadly.