The Brookhaven Courier • May 19, 2020 • https://brookhavencourier.com/106055/arts-culture/remembering-international-day-at-bhc/ 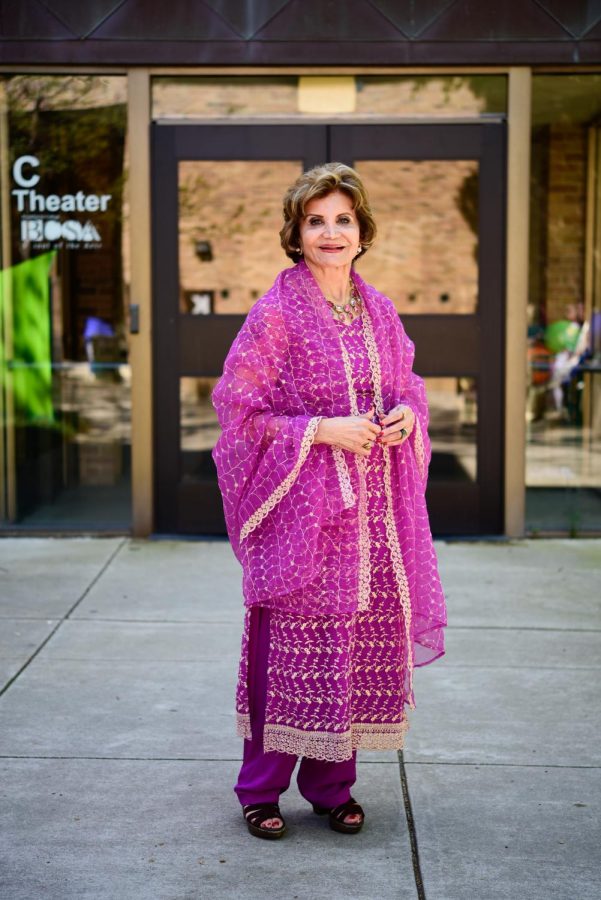 Sheri Van Court, English for speakers of other languages professor, shows of her Iranian outfit during the spring 2019 International Day fest.

Editor’s note: This story covers information from the 2019 International Day. This year’s event was cancelled due to COVID-19 precautionary measures on campus.

As students enter the Commons Courtyard, foreign traditional music can be heard and the smell of different dishes wafts through air. Several tables display artifacts brought by students, staff and faculty to offer a piece of their culture on campus. Flags from all over the world surround the courtyard.
International Day is an annual event celebrated at Brookhaven College since 1986. It is an opportunity for students, staff and faculty to showcase their cultures in different ways. Sheri Van Court, English for speakers of other languages professor, is the coordinator for International Day. Van Court said her colleagues from the ESOL department, and the World Language Division help her organize the event every year.
Van Court said the objective is to introduce other cultures to the campus community and to bring people together. “It is a day to showcase our cultures, and to show people that we bring diversity to the campus,” she said.
Attendees are encouraged to wear clothing that represents their culture. National soccer team jerseys and traditional clothing from a range of countries are seen at the event as well. In previous years, Van Court shared her Iranian culture by wearing a purple Iranian dress embroidered with golden designs.
She said her culture plays a part in why she has decided to continue coordinating International Day. Originally from Iran, Van Court said she was hired as an ESOL professor at Brookhaven in 1986. “At the time there were only two ESOL teachers,” she said. “We started the ESOL program and expanded it and started International Club and International Day.”
One of her students offered tortillas at her table, representing Mexican cuisine Van court said. “I remember that her table was the most popular one.”
A range of performances and showcases take place during the festival. Hyejeong Jeong, Korean adjunct faculty, brings her students and they share a huge showcase of South Korea,Van Court said. A group of African students perform traditional dances.
The opening act is usually a Chinese lion dance. The team of USA Chin Woo Lion Dance have participated in the festival in previous years. Van Court said, “The Chinese lion dance is usually the highlight of the event.” The audience watches as the bright colored lion dances to the beat of the drum. The lion costumes are covered with red and yellow feathers bonded together with flashy accessories.
Rebecca Garcia, an early college high school teacher, has performed the flamenco dance for 15 years on International Day. The crowd watches the tapping of her heels as she twirls in her floral dress to the Spanish music. Garcia wears bright red lipstick with her hair clutched in a bun.
In her 10-minute presentation, she calls people in the audience and invites them to participate. Van Court said, “Sometimes she brings in students and they do salsa dances.” She teaches them a few steps and then they all dance together, Garcia said.
“There are several activities available,” Van Court said, “Students have to wait in a long line.” A team of student volunteers did henna art on the hands of students, staff and faculty members, Van Court said. There is also a fashion show where participants can modelnative garments. Garcia said this was one of her favorite parts of International Day.
Ngoc Q Doan, a former student and last year’s International Club president, said she wore a traditional Vietnamese gown called Ao Dai.
Many groups help facilitate the festival. Van Court said, the Office of Student Life helps with the budget. The International Club oversees preparation. The music department provides instruments. Van Court’s colleagues from the World Languages Division help organize the event. “Professors bring in their students and that helps a great deal,” she said.
Jamileh Stroman, ESOL professor, said she also does her part in the realization of this festival. Stroman said when she receives the flyers, she takes the list of countries represented to her classes. She gives extra credit to her students who contribute to the celebration, Stroman said. “I always take my students to it and give them extra credit if they participate in it because they are preparing and sharing things with the whole campus,” Stroman said.
Stroman said the American participation in this event is rarely seen. “The students from the U.S. don’t usually participate,” Stroman said. “They don’t usually see themselves as part of the international community. I always find that interesting from year to year because we should see ourselves as a part of the international community.” Americans can also show the U.S. culture to the public. “International means all of the nations, the U.S. included,” Van Court said. Everyone is welcome. If they are from the U.S. they are still an international person.
This year’s festival would have taken place at noon on April 6, but with the closure of the Dallas County Community College District, due to the COVID-19 pandemic, the event was cancelled. Van Court said this year’s international day would have resembled previous years’ festivities. She said she is interested to hear new suggestions from students. The door is open to students who want to try something different for next year’s celebration, Van Court said.