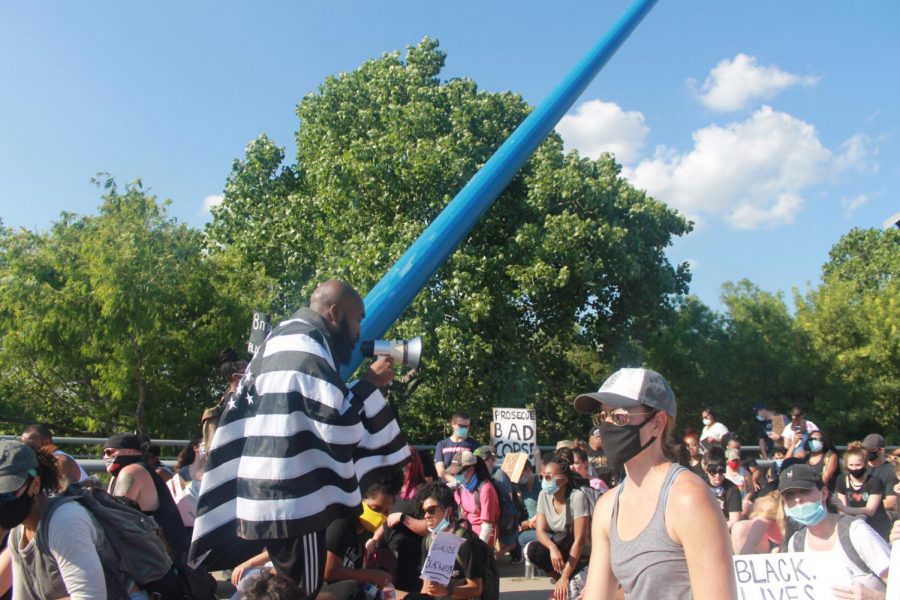 Hundreds of protesters gathered in Addison Circle Park June 4 to march peacefully against police brutality and in memory of George Floyd and Breonna Taylor.

Before marching, speakers addressed the cheering crowd. Protest organizer Daniela Umunnakwe spoke first. She said she organized the protest in Addison because the area was too quiet on topics such as racial inequality and police brutality. “I am tired of hearing news about an African American that died under police force. It has to stop.”

Next Umunnakwe introduced her friend Jacob Clayton, a Dallas area native. “It seems like it was just yesterday when Trayvon Martin got murdered,” Clayton said. “It seems like every single month and every single year since then there has been another name hashtagged, and I am tired.”

Clayton urged the crowd to continue to address issues of inequality beyond protests. “I had so many people text me today to thank me for being on the front line,” he said. “This is not the only front line that exists. The front line is in the classroom, the church, the government. If you want to create real change you have to have a seat at the table.”

Local influencer Brandon Moore reminded the crowd that the goal of the protest was to be peaceful. Moore also addressed his anger about Floyd’s killing. “I am pissed the [expletive deleted] off,” he said. Moore encouraged the crowd to make sure they were informed about what is going on in their communities and to vote. He said: “When you leave here today, make sure this isn’t the last thing you do. Make sure that you connect with someone here and help.”

Addison police Chief Paul Spencer addressed the crowd with support. He said he understands why people are angry, frustrated and upset. “On behalf of the Addison police department, I want to make sure we are acting the right way and demonstrating what everyone wants, which is equality under the law,” he said.

Spencer said he was angered by the circumstances surrounding Floyd’s death. “Every cop that saw that video and is not outraged by that behavior needs to turn their badge in and go do something else,” he said.

The march began just before 6 p.m. Protesters exited Addison Circle Park via Festival Way and marched down Addison Road, before turning and advancing toward Arapaho Bridge. Protesters chanted phrases such as “No justice, no peace,” “[expletive deleted] these racist ass police,” and “Hands up, don’t shoot,” as well as the names of victims of police brutality.

After descending halfway down Arapaho Bridge, the protest organizers urged the crowd to kneel or lie on the ground as they set a timer for eight minutes to represent the time Floyd was pinned to the ground before dying. As protesters lay and kneeled, Clayton made his way through the crowd, repeatedly whispering “I can’t breathe,” Floyd’s final words.

Adony Rios, a protester and former Brookhaven College student, lay down on his stomach during the demonstration. “I felt the need to lay because no discomfort I felt will compare to the discomfort George Floyd felt the day he was wrongly murdered by the police,” he said. “To put yourself in that position is crucial to the cause.”

Rios said it was important for him to march for his black brothers and sisters, who he said have felt for centuries that the system is not there to protect them.

After the timer ended, protesters turned and marched back down the path as onlookers on the side of the road and people in passing cars honked and threw fists in the air.

Around 6:30 p.m, protesters returned to Addison Circle Park, where they gathered to listen to more speakers and chant the victims’ names before dispersing. Among the speakers was Kobe Adoh, another of the organizers of the protest. “I want to have small conversations that work into big conversations that become the narrative,” Adoh said.

Umunnakwe said she felt the protest went well and that her main concern was for protesters’ voices to be heard. She said: “I wanted for the police to hear our demands for justice. However, I wanted it to be as peaceful as possible.”