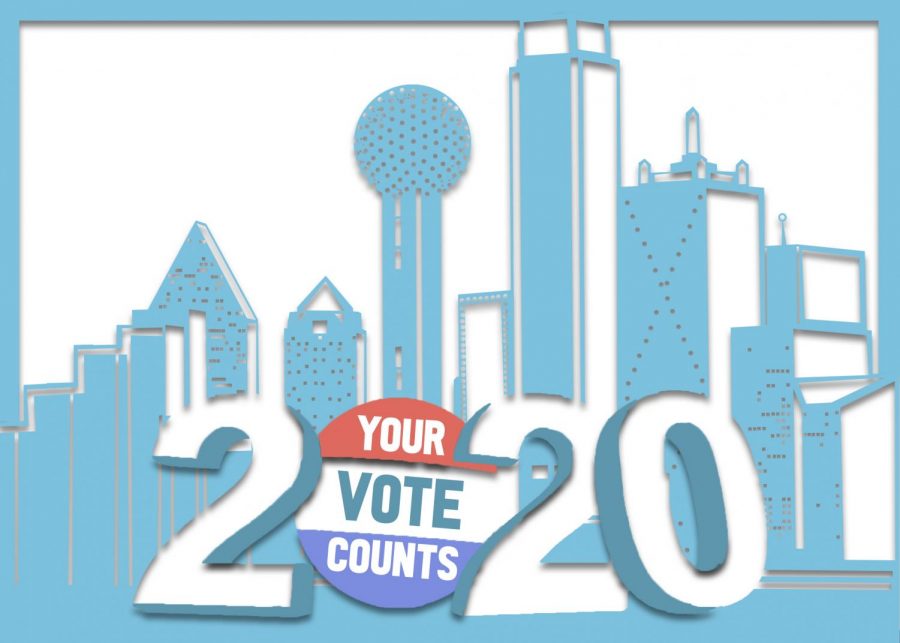 How Dallas County Elections Department conducts this year’s elections could have an effect not only on the residents of Dallas County, but also perhaps on the U.S. as a whole.
In the 2016 Presidential Election, Texas’ 38 electoral votes were decided by approximately 800,000 Texans, according to The New York Times. President Donald Trump won Texas with only 6% of state’s electorate. Dallas County accounts for 9% of the Lone Star State’s population and its registered voters. “The main thing for [people] to know is it’s the most important election of your lifetime,” Dallas County Judge Clay Jenkins said. “I’m an old man and it’s the most important election of my lifetime so get out there and make sure your voice is heard. Democracy works best when more people participate.”

DALLAS PRIMARY RUNOFF
On July 14, more than 1.3 million Dallas County residents will have the opportunity to vote in the 2020 Primary Runoff Election. Early voting ends July 10.
According to the Dallas County Election Department’s website, the runoff elections are necessary because certain primary races in the March 3 elections did not result in a clear candidate with more than 50% of the votes.
Headlining the upcoming elections are M.J. Hegar and Royce West, who are vying for the Democratic nomination for U.S. senator from Texas. The winner will battle 18-year incumbent Republican Sen. John Cornyn in November for the Senate seat representing Texas for the next six years.
Although a general election turns out more voters, many residents of Dallas County will show up to the polls in a few weeks. Each voter will hope to leave healthy, safe and with assurances their vote will count.

SUPER TUESDAY PROBLEMS
In March, Dallas County issued a recount for the primary election due to discrepancies in the ballot count. According to The Texas Tribune, Dallas County missed 9,149 of the more than 329,000 ballots on Super Tuesday. Dallas County discovered it missed ballots from 44 voting machines.
In a March interview with CBS DFW, Carol Donovan, Dallas County Democratic Party chair, said, “This [was] a human error.” However, Toni Pippins-Poole, Dallas County elections administrator, said in a statement, “The outcome of local races was not affected by the recount of the paper ballots.”
Dallas County Commissioner J.J. Koch said: “Some of the architecture pieces I think we handled poorly in this last time around. I haven’t heard that we’re doing anything in any significantly different way in November.”
Of the Super Tuesday issues, Jenkins said, “Those have been addressed so that won’t be the problem this time.”

PREVENTIVE MEASURES
Koch, who represents Dallas County’s second district on the county court, has been a critic of the Dallas County Elections Department in the past., However, he said the elections department applied for, and the county court will approve grant funds for coronavirus related issues such as spacing and additional materials to keep people out of harm’s way.
Koch said there is a “low bar for success” for the upcoming runoff election. “I’m still very nervous about what’s going to happen here in November,” Koch said. “On Election Day in November, I guarantee that we’re going to have at least some type of issue that is significant enough that it makes it into the newspaper and the nightly news.”
As of June 18, Dallas County Elections Department was not available for comment on the upcoming elections.
David Griggs, a Brookhaven College criminal justice professor, has been an election judge for 20 years. His views on the Super Tuesday issues in Dallas differ from Koch’s. Griggs said the whole episode was “blown way out of proportion.” Griggs said the discrepancies arose from workers incorrectly programming voting machines, causing some voting centers to consolidate equipment used for both Democratic and Republican primaries. Griggs was the election judge at one of these locations.
“It’s a long way of saying there were some locations where there was a snafu with the machine,” he said. “It caused the balance to be combined and the people who were counting the ballots didn’t recognize that at first, and [the ballots] appeared to be missing.”
Griggs applauded Dallas County’s ability to increase voter accessibility with the addition of countywide voting. “If you’re a resident of Dallas County, it doesn’t matter what precinct you’re registered in, you can vote at any of the voting centers that the county sets up,” he said.
Koch, Griggs and Jenkins agree it will be difficult to find those over 65 to work the polls due to COVID-19. “A lot of normal volunteers who are in their 70s, some are in their 80s, they’re not going to want to be exposed to hundreds of people, so it’s going to be much harder to find people to man these polls,” Jenkins said.
“It should be OK for this primary runoff,” Koch said. “We’re going to have a very difficult time getting anyone that’s over the age of 65 to go and be an election judge in a place, and that’s going to hit us real hard.”
Griggs said, “It’s going to be a struggle to find newer, younger election judges who aren’t quite as concerned about it.”