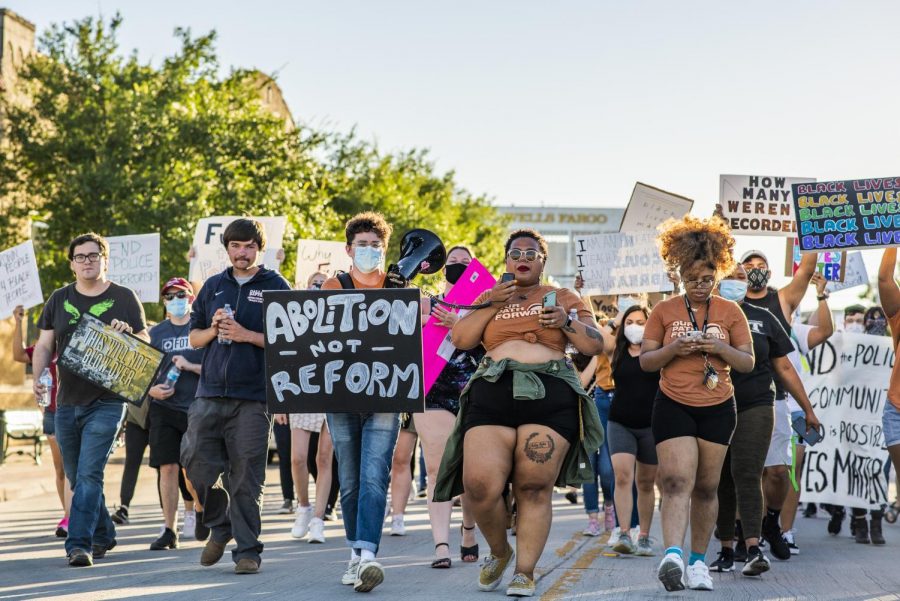 Protesters gathered on Denton Square’s lawns among the frisbee players and dog walkers, signs tucked at their sides. Some signs read, “Black Lives Matter,” “Enough is Enough” and “Police the Police.” On June 10, over 1,000 people participated in a protest organized by Our Path Forward, a group started just one week prior. According to the Denton Record-Chronicle, it was the second largest protest in as many weeks in Denton.

OUR PATH FORWARD
Desteny Edwards, a 21-year-old senior at the University of North Texas, started the organization with co-planners Chris Umunna, Alex Souris and a collective of volunteers. Edwards said she created Our Path Forward in part as a response to performance activism and inconsistent messages she witnessed in the past few weeks; largely in efforts led by non-Black allies.
She said she felt there was a sudden rush to support the Black Lives Matter movement now, whereas there had been no support or even opposition in the past. She pointed to the newfound political correctness of the phrase Black Lives Matter, TV commentators who disparaged Colin Kaepernick are now being supportive, and companies who hurriedly put Black Lives Matter in their marketing efforts as examples.
The sudden shift to support Black Lives Matter by individuals and corporations who were silent before George Floyd’s death is alarming, Edwards said, not only because of questionable intentions but also because of what kind of messages they may be spreading.
Edwards said she was not disparaging other organizations and protests led by non-black people. However, she felt it was important for black people to speak for themselves, so the message presented is clear, consistent and unmuddied by potentially well-meaning but inconsistent agendas.
The emphasis on Black voices leading the movement is prevalent throughout their social media presence: “Peaceful protest led by black voices” on Facebook, “Black voices WILL be heard!” on Twitter and “Black voices advocating for radical change in government institutions” on Instagram.
Edwards said the name Our Path Forward came from her focus on leading a progressive movement. “It’s about coming into spaces with new energy and new creations,” she said. “It’s literally about progressing Black communities and for Our Path Forward we’re focusing on Denton’s Black community.”
This was Edwards’ first time organizing a protest and she wanted it to be organized and safe, she said. Section leaders wore shirts with Our Path Forward emblazoned across the front and managed the crowd. They arrived prepared with wagons full of masks, water bottles, snacks and bug spray. They also had three medic cars to ensure the health and safety of the protestors.

THE MARCH THROUGH DENTON
The protest started with a march from Denton’s Courthouse-on-the-Square and ended with a rally at Quakertown Park.
Midway through the march the crowd stopped in front of the Denton Municipal Court building. Umunna, who is also a UNT student, gave a talk punctuated by chants of “Reform is not enough!” and “Give us a name!” in response to the fatal January shooting of UNT student Darius Tarver by a Denton police officer who had not been publicly identified.
According to the Denton Record-Chronicle, Denton Police Chief Frank Dixon confirmed in a March 3 phone call that the four officers involved were Downing Douglas, Michael Hernandez, Latrice Pettaway and Ryan Spivey. They are also all back on duty, according to Dixon’s statement in the Denton Record-Chronicle.
At the rally, five speakers gave speeches highlighting one of their primary messages: police abolition. Edwards said: “Abolition of police systems is the most loving thing to do because police systems are overworked. They’re working for a system that legitimizes racial violence and systemic racism, and it’s crazy that we’re asking an institution who does that to handle a wide variety of social issues they’re not equipped [for].” By reshaping how police systems operate, Edwards said she feels they are not only making things better for society but also trying to take the load off police officers. “Let’s de-weaponize, re-strategize, and create a new system,” she added. “What’s the harm in that?”
One of the speakers Tulla Moore, a long-time Denton resident, echoed Edwards saying, “Liberation work is love work, but it demands persistence and leaning into new and at times uncomfortable territory.”
The speakers highlighted how current law enforcement and justice systems not only fail in addressing police brutality against Black people but also criminalize and ignore many social issues such as sexual assault, mental illness, poverty, homelessness and drug addiction.

INSTITUTION REVOLUTION
Edwards said this march is about revolutionizing institutions – police, healthcare, education, prison – that have failed to do their job. “Our message is one of abolition,” she said. “One of restorative justice. Not one of destruction but of creation. One of new hope and radical change.”
Moore also spoke about the Black LGBTQ community and the intersection of queer and Black liberation in the fight for justice for all. “The Black queer community always has and always will show up to combat injustice,” she said, highlighting past pioneer Marsha P. Johnson, a prominent figure and activist in the gay rights movement.
She also touched on how important voting is to bringing change. The organizers had two voter registrars present for people to register to vote after the rally.
Deja Jackson, a recent Texas Woman’s University graduate, attended the rally and said she has seen more diversity of support in current protests than in the years since the Black Lives Matter movement started. However, Torren Allison, who attended the rally with Jackson said she remained cautious in her optimism. “You have a moment where everybody’s with it and then it dies off and then another person becomes a hashtag then we do it again,” she said. “I’m hoping that we can be consistent and keep it going.”
Edwards said they are working to become a 501(c)(3) nonprofit with a physical presence in Denton. With safety and social distancing still a priority, they plan to have face-to-face events in a smaller capacity such as docuseries nights and discussions. They are working on a process for people who want to volunteer, Edwards said, but people can connect with them now on Twitter at @_ourpathforward and Instagram at @our.path.forward.