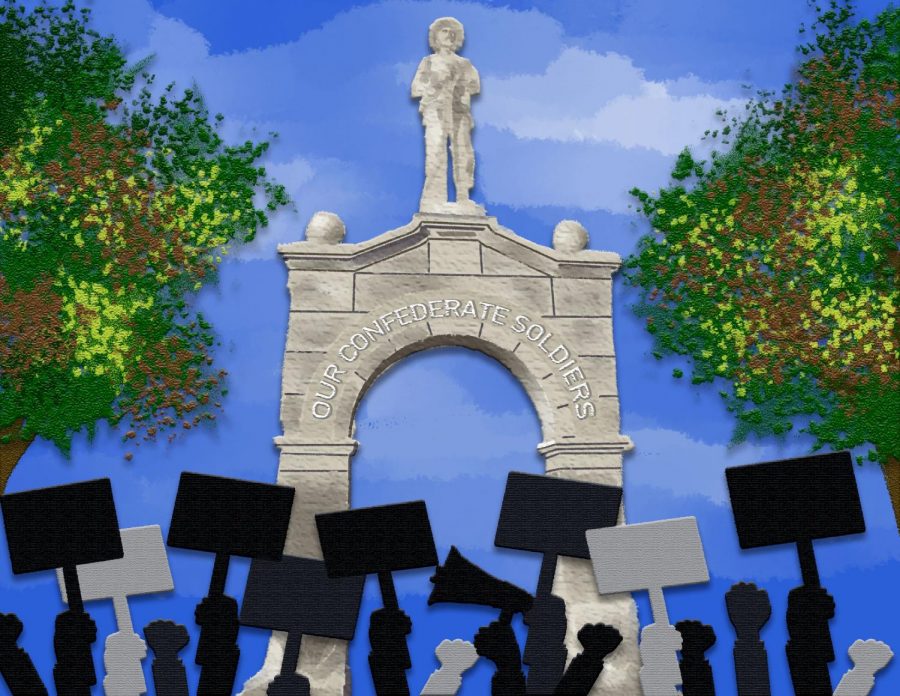 The statue stood in the Square since 1918, when it was placed on the courthouse grounds by the United Daughters of the Confederacy, according to the Dallas Morning News. Over the years, many residents of Denton County have opposed the presence of the memorial, seeing it as a symbol of racism.

Andrew Miwa, a Brookhaven student, said, “I think it’s a step in the right direction to root out the evil that’s been carved into U.S. history.”

Removing the Confederate memorial was once again brought to the County Commissioners Court after recent protests in Denton Square in support of the Black Lives Matter movement, sparked by the death of George Floyd. County commissioners received many requests from Denton County residents to make this change, according to the Dallas Morning News.

The commissioners discussed the removal of the memorial with two citizen committees. During the meeting, Denton County Judge Andy Eads said the statue served as a memorial for some and a symbol of oppression to others, according to the Denton Record-Chronicle.

Karla Miwa, an El Centro student, said: “We should use our energy to make more important moves in this movement. Every vote counts and every voice matters. It’s about how we come forth together. This is a fight that we’ll only win if we join together to make a change.”

With the removal approved, what to do with the monument remained a question. “We have applied to the Texas Historical Society for permission to move the monument to another location,” Mitchell said.

On June 25, the monument was removed and will be held in storage until a relocation spot is determined, according to Fox News KDFW.

Maria Lawson, a Denton resident, said: “I think the Confederate statue in the Square should have been taken down a long time ago, but I think it’s good that they’re finally getting rid of it. I hope that it’s gone for good and they don’t just move it somewhere else in the city.”

According to the Dallas Morning News, Tarrant County Commissioners Court also voted to remove a Confederate monument from their court grounds.