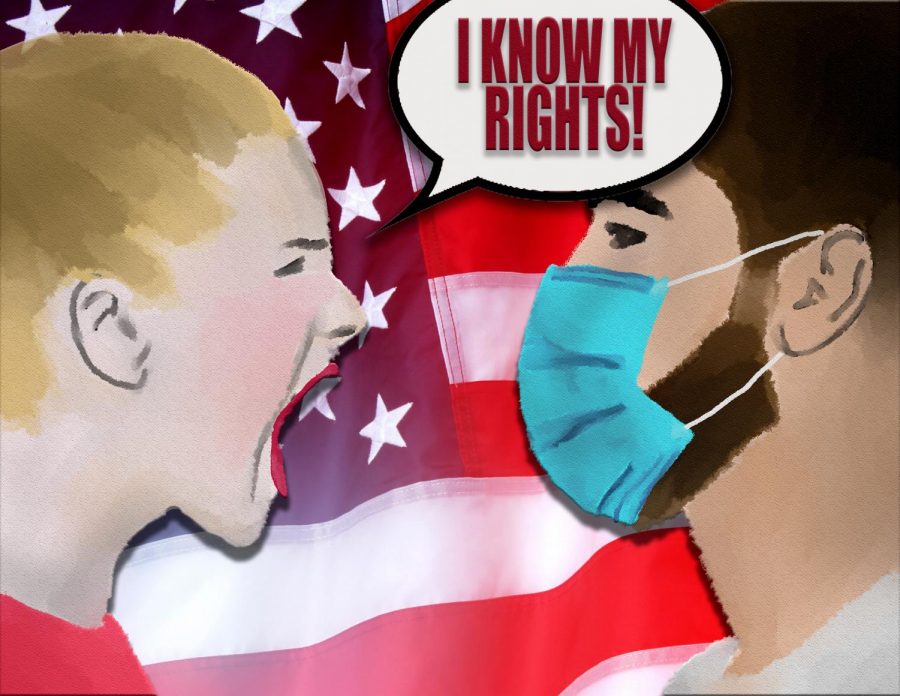 As the number of COVID-19 cases in the U.S. continues to rise, maintaining solidarity in slowing the spread of the virus should be our top priority. Unfortunately, due to our country’s current political climate, we have seen the opposite. One of the most debated issues of the moment is whether laws regarding face masks or coverings are necessary. Opposition to the use of masks and face coverings is irrational and will have deadly consequences.

Most of us were taught as children that effectively covering your cough and sneeze can help stop germs and diseases from spreading. That same logic can be applied to wearing masks and protective face coverings to protect yourself and others from the virus.

A study funded by the World Health Organization and published in The Lancet, a prominent medical journal, revealed that data from 172 observational studies worldwide concluded that wearing a face mask could reduce the risk of contracting the virus.

Based on the role respiratory droplets play in the spread of COVID-19, the Centers for Disease Control and Prevention recommends people wear cloth face coverings in public to stop the droplets from traveling in the air.

Even with scientific evidence to prove the effectiveness of masks, debates and protests in opposition to wearing them have boiled across Texas.

Last month, President Donald Trump said some people only wore masks to “signal disapproval of him,” according to The Wall Street Journal. In May, during a visit to a Ford factory, Trump  told reporters he took off his facial covering before facing the cameras because he “didn’t want to give the press the pleasure of seeing it,” according to TIME magazine.

It is ultimately up to each individual to decide whether to wear a mask if no law or mandate requires the use of one. But as president, Trump’s priority should be protecting people by endorsing the use of masks. Instead, he is putting lives at risk by using masks as a symbol to galvanize and unify his political base, telling his supporters to see every person who wears a mask as his personal enemy.

This month in Austin, demonstrators participated in a “Shed the Mask, Don the Flag” march. The official Facebook page of the march read, “Our freedoms are being hit hard from so many angles right now, and this protest is going to bring to light TRUTH about COVID-19.” If we do not get the virus under control, some of these people will not have any rights to fight for because they will be dead.

I had only seen opposition to masks in the news and on social media until an encounter I had with a woman at a fabric store. The woman, who was not wearing a mask, turned around to greet me. “Why are you standing all the way back there,” she said. I explained that I was following the markers on the floor. “This is all so silly,” she replied. “As long as you’re washing your hands, you should be fine. Doesn’t that mask keep you from being able to breathe?”

Two weeks after my encounter with that woman, I began to show symptoms of having the virus. Had we shared the same opposition to wearing masks, I could have potentially spread the virus to her.

COVID-19 was agonizing. The first symptom was a small lump in my throat. A day later chills crept down my neck and back. The most dreadful symptom came the following day: a headache so intense it made a typical migraine feel like a pat on the head.

In a few days, I went from feeling healthy to feeling beaten and fatigued. I wondered how I could have gotten the virus. I had done everything to avoid it. I watched my peers pour back into clubs, bars and restaurants. I opted to stay home. While stores lifted their mask requirements, I kept mine strapped on everywhere I went. If I could contract the virus even after taking such strict precautions, I believe the anti-mask crowd has an even greater chance of falling victim to it. I feel lucky to have recovered knowing so many people have not.

I understand that in our country we support individuality and the freedom of choice above almost everything else, but something as simple as wearing a mask should not be the cause of outrage and politicized debates, especially when people are dying in record numbers. Continuing to follow their anti-mask ideology could potentially be the difference between someone living or dying. As a survivor of the virus, I ask the anti-mask crowd to understand that coming in contact with this virus is debilitating, and their “right” to a bare face is not one worth potentially killing or dying for. Until we have a viable vaccine, put others first by putting on a mask.