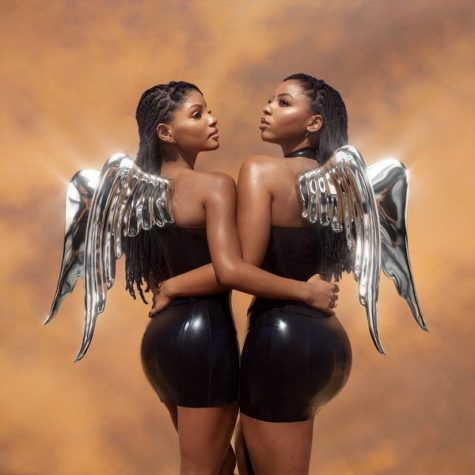 It has been five years since rhythm and blues sister duo Chloe and Halle Bailey signed a joint deal with Beyonce’s Parkwood Entertainment and Columbia Records. Beyonce stumbled upon the pair’s cover of her song “Pretty Hurts.”

Since the release of their 2018 debut album, “The Kids Are Alright,” the duo has kept busy. The duo has starred in three seasons of Freeform’s sitcom “Grown-ish,” sung at the Super Bowl and won two Grammy nominations. Despite a hefty schedule, they managed to carve out time to record their latest LP, “Ungodly Hour.”

Their debut LP plays with coming-of-age themes such as relationships and growing up. Now aged 20 and 22, the duo has decided to show a more mature side. The album opens with the sisters’ voices weaving between each other in an operatic fashion. They then transition to the song “Forgive Me,” a haunting R&B banger, where the sisters assert their dominance in moving on from a relationship. They elevate the song’s eerie vibe with whistle tones parading in and out of the background.

“Baby Girl,” which was penned by the duo and produced by Chloe, is a love letter to themselves and today’s girls. “Baby girl, it’s your world,” they recite. Though sometimes anthems dedicated to women can sound contrived, the song carries authenticity.
On “Do It,” a collaboration with songwriter to the stars Victoria Monet, the sisters’ airy vocals take flight as they blend in unison over a thumping beat filled with 808 snares. Audiences have taken to the song, launching the duo’s first entry on the Billboard Hot 100, charting at 83. The song’s flashy accompanying visual is also up for Best R&B video at the 2020 Video Music Awards. Overall, “Do It” is excellent and in a perfect world would become one of the duo’s signature songs.

“Busy Boy” takes a page from the male condemning songs of the late ‘90s and early aughts that were popularized by girl groups such as TLC and Destiny’s Child. The song aims at taking down a player who is “busy” talking to several women at once. One unanticipated element of the track is a line at the top of the second verse. “It’s four o’clock. You’re sending me too many pictures of your… (Laughs)” This line, in particular, stands out from their earlier work and with the sisters insinuating the word at the end.

Before the release of “Ungodly Hour,” the sisters shied away from using swear words in lyrics and interviews. They told USA Today that line shocked their Dad. “Dad would be like, ‘What?’ Mom would be like, ‘Oh, really?’ Dad would listen to the song a few more times and be like, ‘OK, I like it,’” Chloe said.

Motown tinged mid-tempo “Don’t Make It Harder On Me” is a stand-out track. The song’s nostalgic R&B/Doo-Wop vibe feels like an homage to ‘60s girl groups such as Martha and the Vandellas and The Supremes.

The only bust on the project is “Catch Up,” featuring popular guest rapper Swae Lee. This song sounds like typical radio fodder and is generic compared to the rest of the LP. The track’s saving grace lies within the duo’s unique vocal styling which is too exceptional to be commercialized.

The album concludes with “ROYL” where the girls passionately chant “won’t you live tonight for the rest of your life” in an anthemic way. In a pre-pandemic world, this is the song you would play in the car before a night out with your friends.

The biggest takeaway from “Ungodly Hour” is the duo can explore adult themes without it sounding forceful and contrived. The album feels like a natural progression of themes and sounds. It does a terrific job at highlighting the duo’s songwriting and producing skills. Chloe and Halle’s voices complement each other so effortlessly on some tracks that it is hard to fathom them pursuing musical careers without one another. If the musical growth and material on “Ungodly Hour” is an indication of what the sisters could accomplish on their next project, I am waiting with bated breath.