Five Sculptures to visit in Dallas 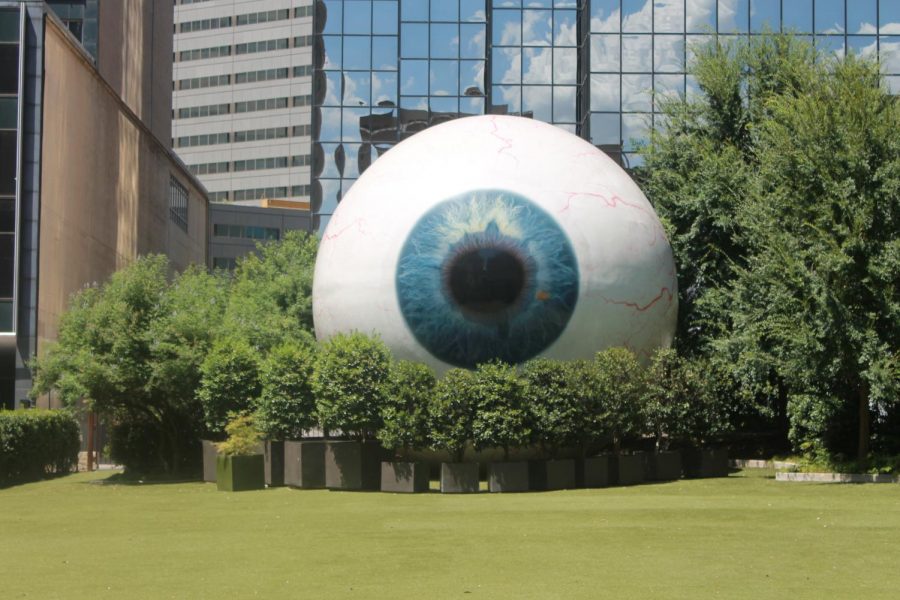 “The Eye,” by Tony Tasset

While some of the city’s popular indoor sculpture sites may be closed, art lovers can still get their fix by browsing a selection of outdoor statues and art installations in and around Dallas. Here are some of The Courier’s picks.

1. “The Eye,” by Tony Tasset
Location: 1601 Main St
The 30-foot-tall glass eyeball, one of the city’s most “eye-catching” sculptures, is hard to miss. “The Eye (Dallas install)” was conceived by Chicago based multimedia artist Tony Tasset. The sculpture was originally created in 2007 for a temporary art exhibit in Chicago before being bought by the Headington Companies for The Joule Hotel in downtown Dallas.

Located in Rosa Parks Plaza, one of the DART bus transfer areas across N. Lamar Street from West End Station, this bronze piece was created in 2009 by sculptor Erik Blome. It is the second casting from its mold — the original is located at the Rosa Parks Museum in Montgomery, Alabama. The sculpture, which depicts the civil rights icon seated on a bus, pays homage to Parks’ decision to stay rooted to the spot when she was asked to move to the back of the bus to comply with a segregationist rule requiring Black riders to give up their seats in the front for white riders. A vacant seat on the sculpture allows you to sit next to Parks. Blome said his statues of civil rights leaders have meaning for him, according to the Dallas Observer. “It does transcend race,” he said.

3. “Ave,” by Mark di Suervo
Location: 1717 N Harwood St
If you have visited the Dallas Museum of Art, you may recognize Mark di Suvero’s “Ave” sculpture, which sits outside the museum on Ross Avenue Plaza. The bright red 12,000 pound sculpture made appearances in New York and Paris before landing at the Fair Park location of the Dallas Museum of Art in 1978. In 1989 the sculpture was relocated to Ross Plaza, where it has stood ever since. In 2019 it was restored after years of outdoor exposure. The restoration process included cleaning, priming and repainting the sculpture in the original shiny red hue di Suvero had given it.

4. “Cancer… There’s Hope,” by Victor Salmones
Location: Pearl St
At Bryan Street’s Cancer Survivors Plaza in Downtown Dallas sits “Cancer… There’s Hope.” The piece is meant to represent a person’s journey through cancer, showing them step through abstract gateways into a different point in life. The artist behind the sculpture, Victor Salmones, was known for his bronze and metal pieces, which can currently be purchased online. The sculpture is the largest of a collection of bronze sculptures in the park. Aside from Dallas, the sculpture has toured various cities across the world, and many other copies exist in parks dedicated to cancer survivors around the U.S. The statue is a significant part of Salmones’ career, as it was the last piece he created before his death in 1989.

5. “The Dallas Cattle Drive” by Robert Summers
Location: Corner of Griffin and Young Street
Robert Summers’ “The Dallas Cattle Drive” sculptures are Pioneer Plaza’s largest attraction.
The line of 70 bronze cattle sculptures, created by Texas native Robert Summers, is a tribute to Texas’ cowboy history. Each piece is extremely realistic looking, with perfectly etched out fur and realistic bone and muscle detailing. Since the launch in 1995, the statues have become a popular attraction.