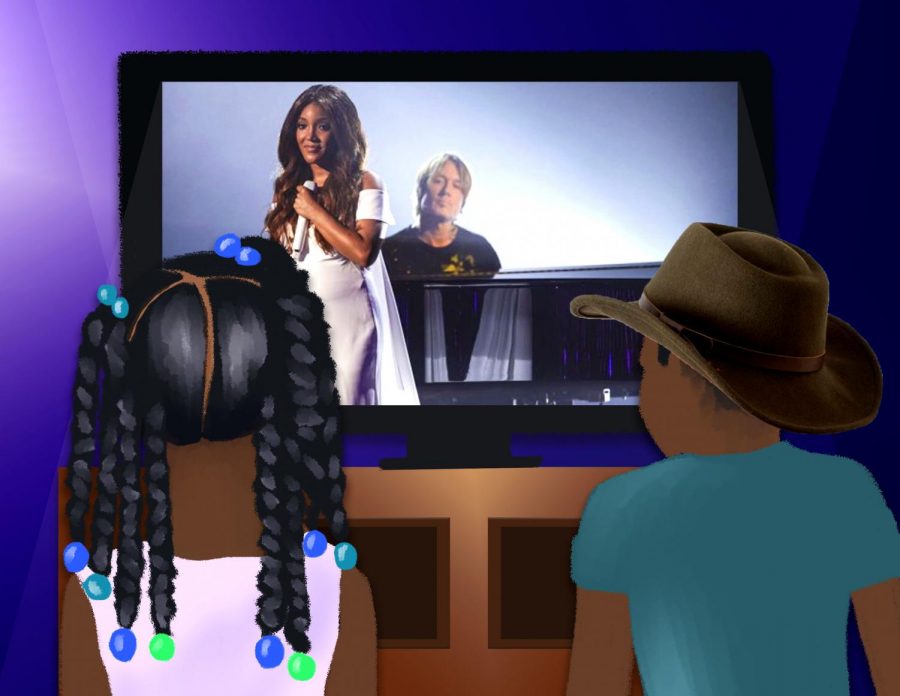 Mickey Guyton's groundbreaking performance at ACMAs is a step in the right direction for the country music industry.

DFW native Mickey Guyton made television history in September, when she became the first Black woman to take the stage for a solo performance at the Academy of Country Music Awards.

The lack of Black female artists in country music is not surprising when you look at how marginalized groups such as women and Black men have fared within the genre. The country music industry is set up for white male artists to dominate. Those who don’t fit the bill have to fight to be seen and heard.

Discrimination and racial bias play a large role in limiting Black male artists in the genre. Black men in country music have been vocal about the racism they have experienced within the industry and from fans.

Country singer Darius Rucker revealed in an interview with Today he faced backlash from country radio stations in the early days of his career for being Black. “When I was going to radio stations and you got guys telling me, ‘We’re not gonna play you ’cause you’re a Black guy,’ that’s just the way it is,” he said.

More recently in 2018, Kane Brown revealed in a since deleted tweet he faced discrimination from songwriters in Nashville. “Damn, some people in Nashville have pub[lishing] deals won’t write with me because I’m black. Aight, I’m still gonna do my thing 100 [percent],” he tweeted.

According to data collected by NBC News, the amount of time dedicated to playing female country songs on country radio has significantly decreased over the last 20 years. In 2019 female led country songs received just 10% of daily spins, meaning a person could tune in to their local country radio station and not hear a single song from a woman for over an hour.

In 2015, Keith Hill, a country radio consultant, encouraged radio program directors to limit the number of songs played by women in their playlists. Hill referred to songs by women as the “tomatoes” of an all-male salad. Hill’s suggestion is sexist and deprives women of equal opportunities to experience the same success as men in their industry.

Black female artists in the country industry have it twice as hard. They are not only poised to face racial discrimination but also sexism.

Guyton told Billboard her peers in Nashville and record label execs have been supportive of her career. However, she has experienced some outrage from country fans citing an incident where white audience members called her the n-word and waved Confederate flags at her. Others have questioned her place in the genre. “A lot of people have questioned my sincerity, because you don’t see Black women singing country a lot,” she said. “Country music is three chords and the truth. So why can’t I sing about being a Black woman and have people listen?”

Singer Priscilla Renea, who has penned songs for country superstars Carrie Underwood and Miranda Lambert, told NPR people constantly question why she wants to release country music.  “I had a pet hog. We had peacocks, chicken, geese, a pond, all types of fruit trees,” she said. “This is just what comes out when I naturally go to sing … I would always have this country twang.”

R&B artist K Michelle has been attempting to release a country album for years. After Lil Nas X’s mega hit “Old Town Road” hit the charts last year, she said people assumed she wanted to create hip hop inspired country songs. “They automatically assume because I’m Black, that I’m about to start rapping or making fun,” she said in an interview with Essence. “I’m not trying to do a hip-hop country. I’m not changing the sound of the genre. I’m trying to change the color of the genre.”

The common theme behind these women’s experiences is built on questioning their “authenticity” and “intentions” because of their race and that’s a problem. Black women deserve to have a place in any genre and should not have to battle stereotypes and preconceived notions, especially when Southern culture also encompasses black women. If these women met the blonde haired blue eyed prototype the country industry is keen on, no one would challenge their motives.

Guyton’s performance is a step in the right direction, but more work needs to be done to give Black women a proper platform to success in the country industry. Black women and other marginalized groups deserve to receive the same treatment as white male country artists. Hopefully, Guyton’s ACMAs performance will help set a new precedent and create more opportunities for her peers.