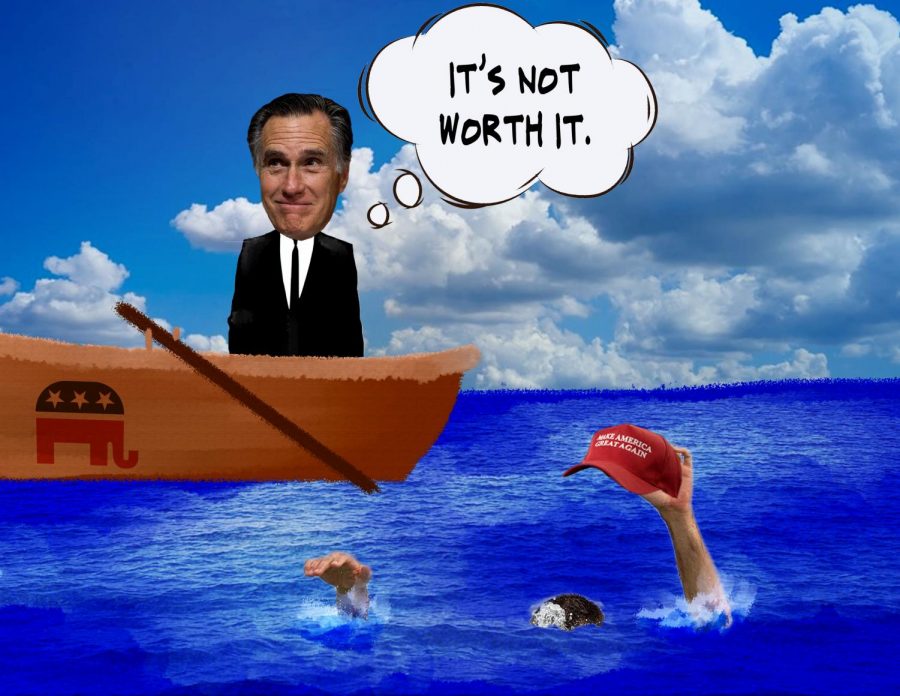 Confirmation hearings to replace the late Supreme Court Justice Ruth Bader Ginsburg began Oct. 12. On Oct. 27 the Senate confirmed Trump’s pick, Amy Coney Barrett. This was be Trump’s third appointment to the high court. With Barrett’s confirmation, Trump has appointed a quarter of the federal judiciary.

With  Barrett confirmed, will Republicans finally shed their infatuation with Trump? Could Republicans who are beginning to despise the president finally have rationale to vote against the Republican Party nominee and bring the country together?

We already saw some prominent Republicans jump ship, such as Colin Powell and John Kasich, who spoke at the Democratic National Convention. The Republicans currently in the Senate will need to act nimbly when choosing whether to distance themselves from Trump in order to save their seats.

Sen. Mitt Romney voted to impeach the president of his party, but Romney voicing approval early to move a confirmation through the Senate could help him get back in the good graces of his constituents.

Sen. Mitch McConnell, who himself is in an election battle, recently said to reporters he hasn’t been to the White House since Aug. 6 because their procedures in handling COVID-19 precautions were different from McConnell’s, such as wearing masks. McConnell will go down in history for his successful steal of a Supreme Court seat in 2016.

With the appointment of yet another conservative justice and with the achievement of a conservative super-majority on the Supreme Court, reasonable Republicans nationwide might be willing to split their ticket and vote for Democrat Joe Biden and for a Republican Senate candidate.

As Trump’s poll numbers worsen and as more Americans grow tired of his tactics and actions, a split-ticket voter may not be so rare in an effort to retain Senate control which polls show is at risk. In Texas, the removal of straight-ticket voting, a process in which voters can press one button to select all candidates of a certain party, could increase split-ticket voting.

Nate Silver’s polling site, FiveThirtyEight, currently shows a 68% chance of the Democrats taking control of the Senate. That lead has grown by 10 points in only the past month, coincidentally growing as Trump’s poll numbers fall. If Republicans want to better their chances, maybe they should steer clear of Trump and stop echoing the president’s rhetoric.

Democrats need only three more seats to take control of the Senate. There are some close elections that Republicans can’t afford to lose.

Susan Collins of Maine has been on the hot seat since her decision to confirm Justice Brett Kavanaugh. Tom Tillis of North Carolina is losing in the polls to challenger Cal Cunningham. Lindsey Graham of South Carolina, the chairman of the Senate Judiciary Committee, who led the hearings of the confirmation of Judge Barrett, has managed to get himself into a close race against Jaime Harrison. Graham two years ago said in an interview at The Atlanta Ideas Festival, “If an opening comes in the last year of President Trump’s term, and the primary process has started, we’ll wait to the next election.” Graham is certainly playing a hypocritical tune now.

Trump’s values do not necessarily line up with traditional Republicans. Faith tends to be a top issue among the right. Trump, when asked about his favorite parts of the Bible, which he claimed was his favorite book, in a 2015 interview with Bloomberg said he didn’t want to go into specifics. Let’s also not forget the time he cleared innocent protesters from outside a church to take a picture while he held a Bible.

Republicans tend to voice strong support of our country’s troops, but it was reported that Trump recently called our fallen soldiers “losers.”

Trump did not pull himself up by his bootstraps like many Americans in his party, nor did he pay his fair share in taxes, as reported by The New York Times. Republicans represent a quarter of the federal judiciary and now two-thirds of the Supreme Court. It’s time they are allowed to step across the aisle and vote for the other party’s candidate.

According to FiveThirtyEight, Biden has an 86% chance of winning the election. This statistic may ease pressure on Republicans uneasy about voting for Trump who would rather abstain than vote for a Democrat. This should give people déjà vu from the previous presidential election in which Hillary Clinton had the same chance as Biden at almost the same point in the race. Nothing is certain. Vote.