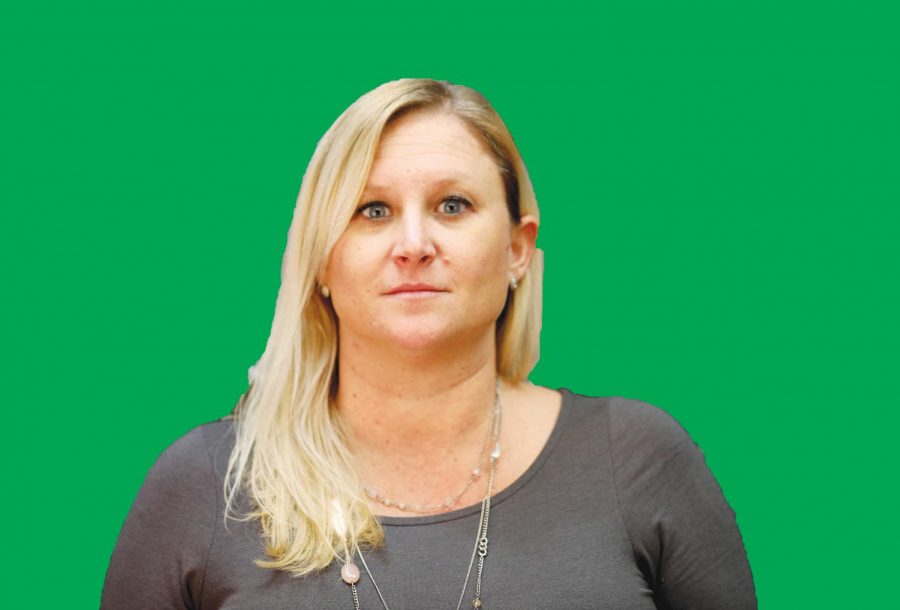 Brianne Sardoni is recognized with the Excellence in Teaching Award during this year's Emerald Awards.

Four years after joining Dallas College Brookhaven Campus as an English professor for college and dual credit students, Brianne Sardoni was recognized as Brookhaven’s professor of the year. Sardoni, who is also a lead faculty member in the Communications Division, won the Excellence in Teaching Award during Brookhaven’s 2020-2021 Emerald Awards Aug. 21.

Sardoni has been teaching for 15 years. She moved from New Jersey, where she said things are very fast paced. “I have had to adjust to a different culture here in Texas, where things are slower,” she said. But Sardoni likes change and enjoys learning.

She taught English writing and composition to high school and college students from 2008-2016 in New Jersey. Sardoni said 90% of her friends were teachers. She said: “A lot of our conversations were about our careers. I learned from everybody around me. I have had a lot of support from friends to forge my own path, which has brought me to where I am.”

In an email to The Courier, Meredith Danforth, Brookhaven’s director of Marketing and Creative Services, said, “The Emerald Awards have been the opportunity that Brookhaven uses to celebrate the nominees and awardees for the college annual awards.” Nominees are generally submitted the previous Spring semester and awarded in the early part of the Fall semester.

Winners for the college-wide awards were announced during a virtual ceremony on Conference Day Aug. 24.

Jennifer Allen, history professor and Faculty Association president, nominated Sardoni for the award. Allen said she met Sardoni during a workshop where Sardoni was presenting topics regarding dual credit students and best practices for teaching them.

Allen said: “Since we both had a passion for teaching, and teaching dual credit students, we became fast friends. We are both from the Northeast, so we had the same Yankee language and have shared several experiences as daughters in Italian American families.”

Allen, who received the award for the 2019-2020 school year, said she had not nominated any professors previously.

“I have unabashedly stolen some of Professor Sardoni’s techniques with successful results, and she is absolutely one of the best educators I have met in over two decades of teaching,” Allen said. “I am lucky that Professor Sardoni is both my colleague and my friend. She is an amazing role model for teachers, women and for our Brookhaven community.”

“She is an advocate for programs that other people may not be advocates for, like dual credit,” Montoya said. “Dual credit is still an area where people are not quite on board in higher education. … I think she is a great pick for the award this year because I think faculty needs to be recognized when you are starting to really focus on diversity in the classroom.”

As Brookhaven’s Excellence in Teaching Award winner, Sardoni has been nominated to the statewide Minnie Stevens Piper Professor Award, which recognizes outstanding college professors across Texas.

According to utexas.edu, the award, founded in 1950, recognizes professors for outstanding academic scientific and scholarly achievements and for dedication to the teaching profession. Each year the foundation selects 10 Piper Professors from across Texas for their superior teaching at college level.

Each college and university is allowed one nomination per year for the award, according to utexas.edu. Up to five letters of recommendation from a nominee’s college administration, current and/or former students and colleagues may be submitted. To apply, a nominee must fill out a two-part form as well as a current curriculum vitae, or professional resume.

Sardoni said she knew she had been nominated and filled out the proper forms. The professor sort of put the award to the back of her mind and returned her focus to preparing for the Fall semester. When she was notified, she said, she was happy and surprised. “I am humbled to be recognized,” Sardoni said. “It is good to know my peers think I am deserving of this award.”

Sardoni is currently working on her doctorate in higher education administration at Southern Methodist University and anticipates graduating in May 2022, according to her curriculum vitae.

Sardoni said she plans to mentor and help develop new teachers and continue working with dual credit offices. “I do not intend to become complacent,” she said. “I am taking time to reflect on ways to build and expand teaching that will be helpful to all and finish my doctorate at SMU.”