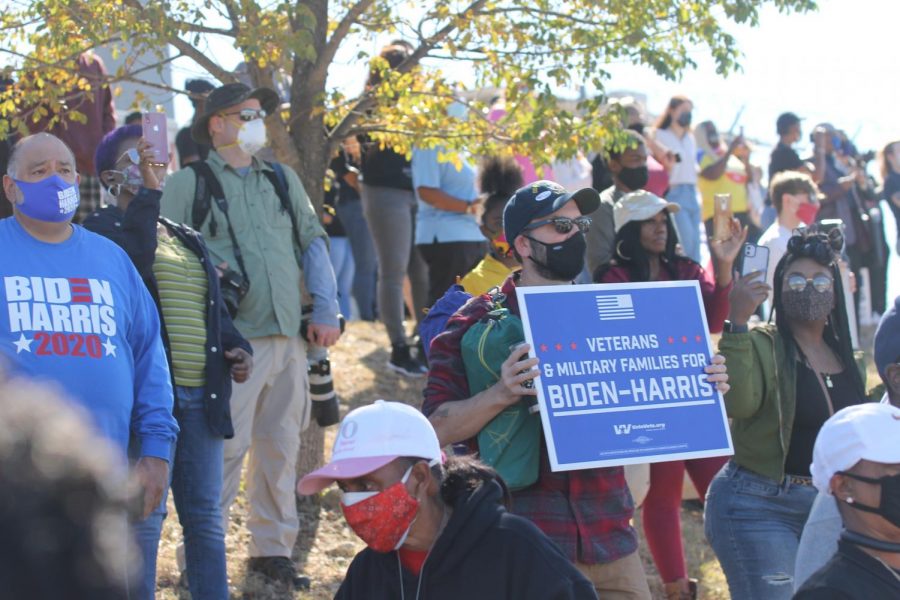 Supporters gather on a hill to catch a glimpse of Democratic vice presidential nominee Kamala Harris, during a Oct. 30 campaign stop in Fort Worth.

Vice presidential nominee Kamala Harris addressed a crowd of supporters Oct. 30 at a campaign event in Fort Worth.

Her appearance marked the first time since 1992 that a presidential campaign came to Fort Worth days before Election Day.  Then-presidential nominee Bill Clinton was the last candidate to make  an appearance at Fort Worth Meacham International Airport.

The closed event, which was held at First Saint John Cathedral in southeast Fort Worth was one of three events planned by the Biden campaign across the state to sway potential voters in predominantly Republican counties.

Before taking the stage, Harris was spotted outside the cathedral, waving to supporters on the street.

While on stage, Harris criticized President Donald Trump’s support of a Texas-led lawsuit to repeal the Affordable Care Act.

“On the one hand, you have Joe Biden, who, together with Barack Obama, created Obamacare, which brought health care to 20 million people and protected people with preexisting conditions,” Harris said. “On the other hand, you have [President] Donald Trump, “who, together with his boy Bill Barr, are in the United States Supreme Court right now trying to sue to get rid of the Affordable Care Act,” she said.

Harris took time to praise Texans for breaking the state’s early voter turnout record. She also  encouraged those who had not voted yet to vote. “We know this is no time to let up on the pedal,” she said. “People sent me pictures of them standing in line … waiting to vote. People are committed.”

After Harris finished her speech, Fort Worth Police Department vehicles lined the streets to form a barrier as the crowd waited to catch a glimpse of her. Fifteen minutes after exiting the stage, Harris was spotted in a black SUV waving to supporters while wearing a mask.

Despite details surrounding the location of the event being kept under wraps, hundreds lined the streets outside the venue donning Biden-Harris signs and flags, occasionally cheering “Turn Texas Blue” and “Biden-Harris.”

According to a poll conducted by the University of Texas early October, Trump leads in Texas with 50% and Biden at 45%.

Team Biden’s attempt to garner support in Texas so close to the election could be highly effective in turning Texas blue. For the first time in decades, the GOP’s stronghold on Texas voters is at risk. More voters living in urban counties and suburbs are registered in this election than before, according to The Texas Tribune.

A change in voter demographics could also potentially play a role in turning the state blue. Since 2016, an influx of people increased the number of eligible voters in the state by 2 million. Additionally, 800,000 Latino voters turned 18 since the 2016 election, according to The Washington Post. Democrats are banking on these voters to help them take Texas during the election.

Oscar Alvarez, a high school student, said he attended the event to show support to Harris and Biden. Alvarez said this election is impactful for him as his Gen-Z peers. “We’re not in accordance with a lot of the stuff the older generation is,” Alvarez said. He is a strong believer in equal rights for women and the LGBTQ community. “I feel like this election should be very important to all of us,” he said.

Fort Worth residents Elle Wagoner and Gabby Ontinveros attended the event with signs reading “Biden-Harris 2020” and “Gen-Z for Biden-Harris.”

Ontiveros said they heard Harris was coming to the area so they searched all morning for details so they could attend.

“We just don’t want our women’s rights taken away,” she said. Ontiveros said she feared for her rights because of Trump’s rush to nominate and confirm Amy Coney Barrett to the Supreme Court.

Wagoner said her motivation for supporting Team Biden was their stance on protecting LGBTQ rights. “Even though I am not a member of the community, I am a very strong ally,” she said. “Legal rights and protections should be for everyone, not just straight people.”