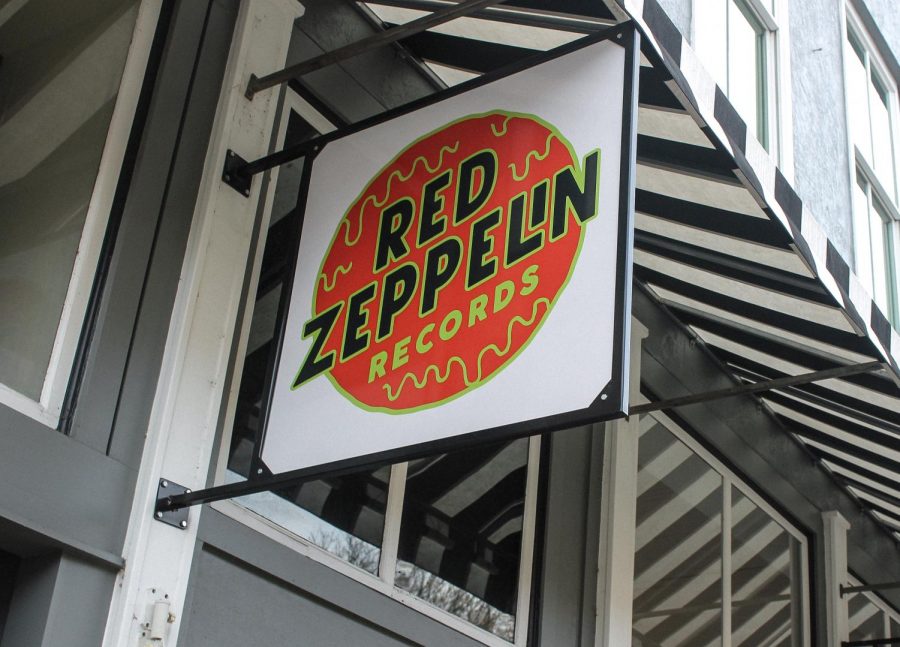 Outside of Red Zeppelin located in Downtown McKinney.

A mural of funky aliens, lips spilling green and red slime, and an homage to David Bowie’s iconic alter ego Ziggy Stardust adorn the back wall of Red Zeppelin, a new record store in McKinney, Texas.
Katie Scott, Red Zeppelin owner, said one of the main goals of the store is to remove customers from suburbia and transport them to a punk-inspired space more suitable for a large city. With its wide-ranging selection and mural, Red Zeppelin is a unique store.
Red Zeppelin has more than the contrast of store ambience versus the town it calls home to make it unique. It is one of the few female-owned record stores in Texas. Scott said: “We’re not trying to play some feminist thing. We’re just proud of it.”
Manager Bayleigh Cheek agreed. “We’re not man-hating,” she said. “We’re really appreciative of what men have done in the industry. We’re proud to be a woman-owned business.”
Cheek and Scott have a largely positive outlook on how the music industry views women. Cheek said things have gotten better and women are more respected. Scott, who shares the same sentiment, said many of the best musicians nowadays are female.
The duo has faced adversity as women in the music industry. They said one of the biggest challenges they have faced due to their gender is that some have a preconceived notion they do not know as much as their male counterparts about music.

SUCCESS DESPITE PANDEMIC
Opening a record store during a pandemic is a feat many would not undertake. An already successful business owner with The Groovy Coop, also in downtown McKinney, Scott took it in stride.
“People just want to get out of their head,” Scott said. “Both of our places are kind of an experience and you’re stepping into a different world. I think people need that right now.”
Cheek said she supports the idea of a need for entertainment and escape.
Red Zeppelin’s opening was a touch unconventional. “I mean, the day we opened, we didn’t even officially announce that we were opening,” Cheek said. “We just did like an Instagram post and it was packed the entire day.”
Both women said a buyer’s ability to either shop online or go straight home after shopping might add to a record store’s appeal in current times. The store’s success has been acknowledged with a nomination for Best Record Store by the Dallas Observer Music Awards.
Red Zeppelin has been a fan favorite since day one. Kate Siamro, who works at Spinster Records in Dallas, said the McKinney store adds to the record scene in North Texas. “It’ll be good for teens,” she said. “I wish it existed when I was in high school.”
Despite the rise of streaming giants like Spotify and Apple Music, physical sales, especially vinyl records, have seen an upward trend, according to CNN Business.
Cheek, who is a musician, said she thinks it is partly because of the sound quality, and partly because of the experience of going through the selection at a store. “There’s just something very nostalgic and magical about flipping through records,” she said.
Cheek and Scott are longtime record collectors. Cheek started her record collection around 13 years old, with U2 and The Police records sticking out as early favorites. Scott also started her collection as a teen, and recalls Def Leppard’s “Hysteria” being one of the first physical albums she owned in any format.

LOOKING FORWARD
Cheek and Scott have definite goals for the future. Cheek said, “God, I hope it goes back to playing shows in front of people, and I think it will.” She is not interested in any other format taking the place of how concerts were going down prior to March’s initial lockdown. Cheek has been nominated for Best New Artist as well as Best EP by The Dallas Observer Music Awards.
Scott said one of her goals include expanding Red Zeppelin beyond its downtown McKinney flagship, but they are just taking things as they come. Scott said she would love to create similar spaces in new locations.
Cheek offered advice for musicians. “Just be completely fearless and just do it,” she said. “Don’t let any voices hold you back.”
Scott’s advice leaned toward business owners. She said, “The number one thing that is most important when opening a business is knowing who you are.”