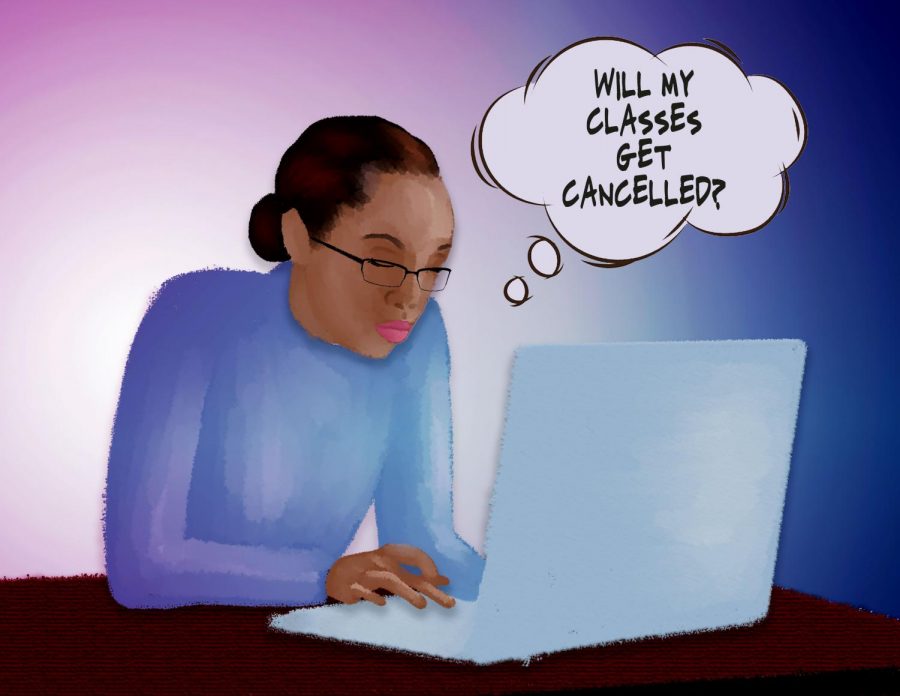 Editor’s Note: Requests for comments from Dallas College provosts were not returned for this story.

Over the summer, Dallas College administrators raised the minimum enrollment number for many classes. This change has created issues for adjunct faculty and was detrimental to several professors, especially those within the English for Speakers of Other Languages program. This is just one of the problems the ESOL program has faced this semester.
Minimum enrollment is the minimum number of students that a class section is required to have to be held in a semester. If the minimum enrollment is not met by a certain date before the beginning of the semester, the class is canceled.
Jamileh Stroman, an English for speakers of other languages professor at Brookhaven Campus, said that until the Spring 2020 semester, she would have up to 15 students in a section, but that number has now become the minimum required for her classes to continue.
“I have 10 different classes that were put together to make five classes that I’m paid for,” Stroman said. “I am teaching one class for free because I cannot put those two classes together,” she said.
And combining classes did not always mean simply combining multiple sections of students taking the same course into a larger section. “They gave me a class that is [ESOL 0041] reading and [ESOL 0042] reading, which does not work at all,” Stroman said.
Stroman said ESOL 0041 is a beginner’s reading class where students learn basic vocabulary used in everyday life, while students in ESOL 0042 learn vocabulary for college and university courses.
“It wouldn’t be fair to the 041 [students] because they couldn’t do the work of 042, and it wouldn’t be fair to 042 [students] because they don’t need 041 again,” she said.
Brian McClung, an ESOL and Italian professor at Brookhaven, said he also lost classes due to low enrollment. While he was originally scheduled to teach six sections — three of writing and three of grammar — he is only teaching one of each. He said the situation could have been handled better and that raising the minimum number of students only made things worse. He also said that due to low enrollment very few ESOL classes took place in the summer.
In an email to The Courier, McClung explained the reasoning of the administration. “They said that they were doing this because they needed to ‘run a tight ship’ [be very careful with money] during the pandemic,” he said.
According to The Chronicle of Higher Education, higher education has lost about a tenth of the workers it had before the pandemic, and some programs and degree offerings might be gone for good, even after the distribution of a vaccine for COVID-19.
McClung said he has not had problems moving to online classes because he has been teaching Italian online for many years, but that with ESOL, it is a different story. He said the textbook they are using does not have good online resources. “Some ESOL students don’t really have strong computer skills,” he also said.
ADJUNCTS
Adjunct professors have had an even rougher time. The ESOL program at Brookhaven does not currently have any adjunct faculty due to the small number of classes available, McClung said.
According to the American Association of University Professors’ 2019-2020 report, part-time professors made up 52% of the faculty at institutions in the country. But, according to The Boston Globe, the pandemic has caused thousands of adjuncts across the country to see their careers affected.
Sam Govea, executive dean of the School of Law and Public Service at Brookhaven, said he works with around 100 adjuncts spread across all disciplines. Most of them teach history, psychology and government, which are the courses with highest enrollment.
“The adjuncts may not have gotten as many classes this semester as they typically would have,” Govea said. He attributes this to full-time teachers not being confined to time frames, or class periods, that prevented them from teaching more hours. “As a result, more of our full-timers are getting to teach extra classes, which is great, because they have always wanted to teach extra classes. But that means that our part-time instructors do not get as many classes because the full-timers are getting them,” he said.
However, Govea said, his faculty had more total enrollment than ever this semester, and several of their classes reached their caps of 37 students. “There’s this idea that online is easier,” Govea said. “So I think, for some folks, when the decision was made that this is going to go online, they thought, ‘Oh, open book tests. Wow. OK, I can do that.’”
SPECIAL CHALLENGES FOR ESOL
Along with the pandemic, the ESOL program has faced special challenges of its own. Guidelines established by the Student and Exchange Visitor Program in July raised questions about whether international students could stay in the U.S., which deeply affected the ESOL program. “Some of my students that I’m teaching right now are actually physically in Brazil, Korea [or] Turkey,” Stroman said. “They are not even here in the U.S., so it has been detrimental for enrollment in our program.”
This is on top of the broader challenges teaching online poses to many professors, such as Stroman, who has taught in person for many years. Stroman said she schedules long sessions with Brookhaven’s IT staff to be more effective online.
“I am not a technology person,” she said. “And I really did not have the skills for that, but I am working very hard to get them.”
Stroman said she is trying to reinvent herself in the face of the current situation. She said she has been studying to teach Spanish since this summer. “If ESOL classes continue to be canceled and put together in a way that is not good for the students,” Stroman said, “I am preparing to teach something else.”