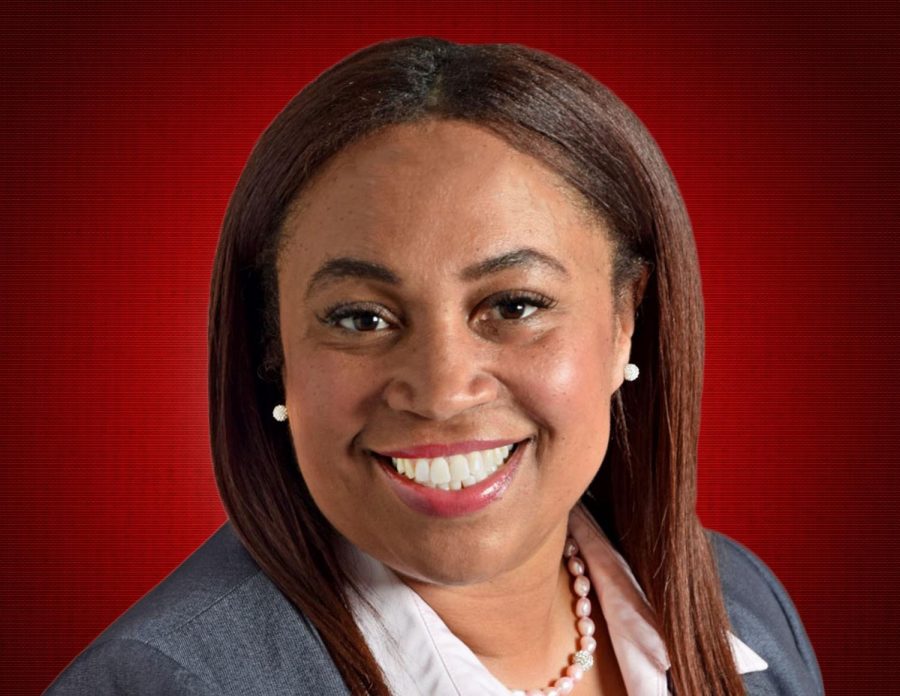 Shawnda Floyd was appointed to be Dallas College’s first provost June 18 and officially started her new role July 1. In a districtwide email, Chancellor Joe May said Floyd “will serve as the primary academic lead for the college and will oversee vice provosts, e-learning and other academic services including, faculty professional development.”
Being selected to serve in the position didn’t shock her colleagues. “We all saw it [when] she came in as the dean,” Dennis Frazier, interim faculty member and senior administrative assistant to the vice president of business services at North Lake Campus, said. “We were like, ‘Well we won’t have her long because she’s so wonderful somebody’s going to snatch her up.’”

FROM THE COURTROOM TO THE CLASSROOM
Floyd got her start in the courtrooms of New Jersey, but she went to college thinking she would be a doctor. “I started out as a biology major but very quickly decided … the higher sciences were a bit much for me,” she said. She always loved to read so she switched to English with a minor in biology.
After getting a bachelor’s in English literature from Rider University, Floyd went on to law school at Temple University and began practicing as a litigation trial lawyer in Monmouth County.
She started her own practice. The job, though rewarding, was busy and stressful. She loved her legal work, she said, but being a litigator also meant going to court all the time. After starting a family, that was very hectic.
“Being a mom and being my best at that, as well as being this litigator that was in court all the time and being my best at that were in conflict with each other for me,” Floyd said. “That’s what made me start to reevaluate what I should be doing with myself.”
Strong influences in the legal field cultivated in her a strong foundation in community engagement, building on lessons she had learned as a child to give back and serve in the community. Her legal work also taught her valuable lessons about working with people.
“As a lawyer, you’re working with different populations of people dealing with real time conflicts or concerns,” she said. It taught her to make better decisions in the moment, strategize and use her best judgment of people.

A WINDING ROAD
After 10 years as a lawyer, Floyd’s path to higher education was launched with a chance meeting in a coffee shop. There she met the man who would eventually become her dean. He offered her an opportunity to come out to his campus, Brookdale Community College.

“He thought I would be a great teacher and I was like you know that’s something I’ve never really considered before,” she said. “I took him up on it.”
She started at Brookdale in 2003 as an adjunct teaching two developmental writing classes and fell in love with the work. Over the next 11 years, she would move from adjunct and work her way up to department chair.

In 2015. Floyd started working at Dallas College’s North Lake Campus as the executive dean for liberal arts after relocating to Texas in 2014.
The move allowed Floyd’s leadership to rocket her up the rungs of higher education governance. In 2018, she became executive vice president for academic affairs and student success.

After six years of leadership at North Lake she was ready to move to the next level. Brett Dyer, interim executive dean for the visual and performing arts, said he envisioned the provost role being perfect for her. “She’s really in tune and she knows what’s going on at the school, even within smaller areas,” he said. “She has the faculty’s best interests at heart.”

This was especially apparent in the arts department, where Dyer says class sizes tend to be smaller and more one-on-one. Floyd asked to visit one of his classes to better understand how their environment works. “Just to have an administrator at that level come to my class and seem excited to be there … It’s like she truly wanted to know what was going on and how those classes are different from others,” he said.

This kind of personal touch reinforced his assessment of her ability to work with faculty and communicate their interests with a fair and equitable hand.
“I was hopeful to be able to find [a provost position] in the district,” she said. “I’m really energized and excited about the work and definitely happy to be able to continue here in Dallas.”

Floyd felt humbled and honored to be selected as the first provost for Dallas College. It’s a huge undertaking, Floyd said. “It was one of those things where you’re so excited,” she said. “You’re going through the phone call and you’re accepting with the chancellor, but I promise you within like hours, all I saw was the populating of my calendar.”

THE CHALLENGE AHEAD
“Education’s full of challenges because we’re in a constant state of change and flux,” Floyd said. The introduction of prerequisites into the Texas higher education scheme, Guided Pathways, and now the consolidation of seven colleges into one, are just some of the major cycles that have occurred in Floyd’s time with the college.

The provost places Floyd over the entire academic arm for Dallas College. She points to this alignment as the first big effort they must undertake: “One of the first things that we have to do is start to align the schools,” she said. “With the roles of the provost and the vice provosts, we have moved to a new supervisory system for academics. Where we used to have VPs, like myself over academics, we don’t anymore, they’re all aligned under these schools.”

She envisions the future of Dallas College like a train running smoothly on the tracks. “That’s where we have to get,” she said. “You’re looking at all of the work it will take to get there, but it’s inspiring work. And it inspires me and I know it inspires the new team.”

Floyd is motivated despite the amount of work. “It’s not about me, but it’s about what we’ll be able to do for our students,” she said.

LEADERSHIP
Floyd said her leadership and how she engages people comes from a sum total of life experience and no experience has been wasted. She has had no shortage of leadership opportunities at North Lake but feels the ultimate goal of leadership is people. “With leadership, you just have to want to help people and be good at that and be supportive and do those things consistently,” she said.

A CULTURE OF CARE
Many of her colleagues spoke about her mentoring mentality and her compassion for staff and students alike. Whether it’s going to students’ art exhibits and showcases and personally greeting students and their families at an Early College High School opening or visiting a new employee in the hospital during a tough family crisis and supporting her direct reports in their leadership efforts, she cares.

Frazier spoke of how instrumental she was in encouraging him not to stop his educational journey at an associate degree. “She didn’t know me from a can of paint,” he said. “But she said ‘I see greatness in you.’” Within two months of being hired at North Lake, she had promoted him. This past December he completed his master’s degree.

NOT YOUR TYPICAL BOSS
Her compassionate, down to earth, make things happen style has endeared her North Lake colleagues and many said they would go with her if her office moved from North Lake. Tiffany Kirksey, dean of Student Support Services, said: “She is able to embrace everybody in the room. She genuinely seems to care about the people she works with and the people that work for her.”

Kirksey also added that she is a visionary leader who embraces change and develops relationships with people at every level in the organization.
“She makes you feel worthy,” Dyer said. “I love teaching, that’s my primary focus, but if I was going to be an administrator, I’d want to be one like her,” he said. Dyer feels communication is one of her strongest attributes.

Her leadership has not only impacted many of the people she’s worked with but those closest to her who have seen her weather the ups and downs: her daughters. “Those are my hearts,” she said. She hopes her experiences will teach them to be strong and not give up.

“When you look at where you come from, and what you’re able to achieve, you have to take some happiness in that. Just to know that what you are is not what you will be,” she said.