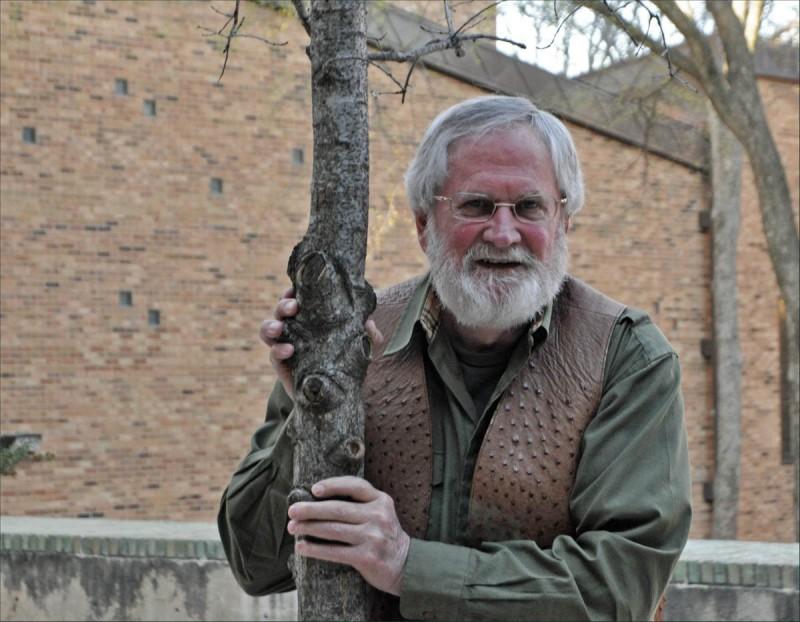 Bob Little, in one of his trademark vests, photographed in 2014 by Paul Lauder for Brookhaven’s 35th anniversary.

Robert Douglas Little, also known as “Bob” and affectionately as “Uncle Bob,” passed away in his sleep at his home in Richardson, Texas, on Dec. 29, 2020.

Bob leaves behind a profound mark on the hearts of students and faculty members of the Dallas College Brookhaven Campus.

“Bob impacted nearly every part of my professional and personal life. He was my mentor and my friend, our bond is very special,” Ahad Hayuad-Din, a Brookhaven political science and government professor, said.

Born in 1945 in Storm Lake, Iowa, Bob cultivated connection and friendship throughout his childhood, creating bonds that would flourish and carry him into adulthood. His most cherished memories were of life on the farm with his best friends: the animals.

Upon graduation from Albert City High School, Bob enrolled at Fort Dodge Community College. He transferred to the University of North Texas and obtained his bachelor’s degree in education in 1967.

Bob set roots in education in the Dallas community as a student-teacher at Adamson High School in Oak Cliff before obtaining his graduate degree from the State University of New York at Buffalo. He then went on to teach history and geography at W.T. White High School in Dallas.

Dallas County Community College District became home to Bob’s career in 1971 where he taught at Mountain View College Campus until 1978.

He became a founding faculty member of the Brookhaven Campus in 1978 where he remained until his retirement in May 2020.

“We started our mutual journey to create the best learning environment – Brookhaven College in 1978. All the founder faculty came together and bonded under adversity since there were no lecture halls finished and an abundance of fill dirt,” Glen Kasparian, Brookhaven founding faculty and current University of North Texas anatomy and physiology adjunct professor, said in a statement on Bob’s memorial website. “He would stop me in the hall to introduce me to one of his new colleagues or a student to make a connection.”

At the celebration of Bob’s life on Jan. 7, his sister Jane Vallier said: “He was fortunate to have found the work he loved teaching political science and government. He entered each classroom with enthusiasm and optimism. No wonder his students and colleagues loved him. He never let down and what he chose to do was important.”

Bob’s widespread impact through his 53-year career can be felt among generations through their gratitude and appreciation.

“He was always so proud when his students would contact him to tell him all the great things they were doing after Brookhaven or how his class had helped them after they transferred,” Sam Govea, executive dean of the School of Law and Public Service, said. “The campus will be very different without him.”

The Brookhaven flag flew at half-staff in honor of Robert “Bob” Little Jan. 6-12. Colleagues joined in a moment of silence at 10 a.m. on Jan. 7 in remembrance.

Bob leaves behind his daughter, Lisa Little of New York City, and his life partner, Nancy Ungerman of Dallas. He is also survived by his brother, James Little, and wife, Sandra, as well as his sister, Jane Vallier, and her husband, Fred Vallier.

“His ability to bring people together and focus on the positives will long be remembered as his calling card,” Hayaud-Din said.

“Just being alive isn’t good enough. You have to get out there and see things and go places. Leave your emails at home and have fun.” Hayaud-Din said borrowing from a fraction of the wisdom Bob bestowed upon him.

The Faculty Association at Brookhaven is setting up a scholarship in Bob’s name. For more information, contact professor Hayaud-Din at [email protected] Memories and photos can be shared on Bob’s memorial website.