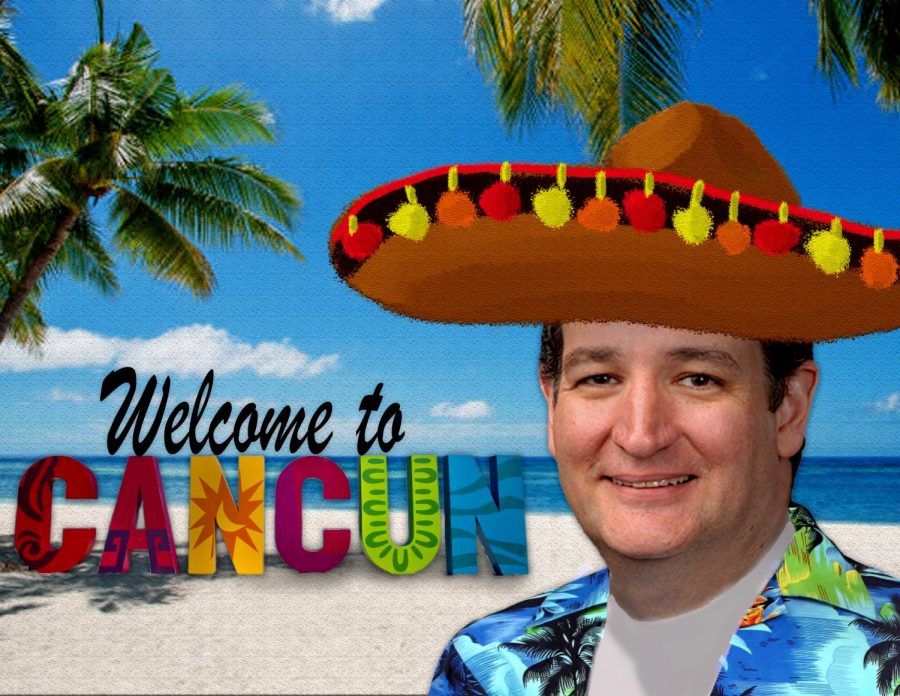 While millions of Texans faced power outages and busted pipes brought on by the recent winter storm, Texas Senator Ted Cruz was spotted on a plane fleeing to Cancun, Mexico. After photos of him went viral on social media he was met with backlash, forcing him to take the next returning flight back to Texas.

Cruz should be embarrassed and ashamed for leaving while we sat and suffered. As an elected official, he should have remained home and stood in solidarity with Texans by offering help.

According to CNN, Cruz told reporters he fled with his daughters because they asked to take a trip with friends. “Wanting to be a good dad, I flew down with them last night and am flying back this afternoon,” he said.

I find it ironic that he decided to frame his behavior as a “good dad” moment to gain sympathy from the public. He has often criticized people who illegally immigrate to the U.S. to give their children better lives. It seems his criticism doesn’t apply when his children are involved.

His actions are hypocritical. Last December he tweeted a series of attacks aimed at Stephen Adler, Austin’s mayor, for traveling to Cabo San Lucas, Mexico amid the pandemic. “Hypocrites. Complete and utter hypocrites,” he said in a tweet. A mere two months later Cruz was caught doing the same thing.

Many of Cruz’s followers came to his defense. Some argued there wasn’t much he could do to help due to weather conditions. Joe Rogan, host of the Joe Rogan Experience, echoed these sentiments on an episode of his podcast, saying: “Here’s the thing: What can Cruz do? What is the reason for him staying?”

The answer to Rogan’s statement is simple. Cruz could have been fundraising, making wellness calls or helping Texans find resources. No one was expecting Cruz to magically fix the state’s power grid issues, but we expected him to be active in other ways.

While he was jet-setting, others were helping assist Texans. Beto O’Rourke, 2018 Texas Senate candidate, and volunteers made over 100,000 wellness calls to seniors throughout the state according to Yahoo News. According to Business Insider, Alexandria Ocasio-Cortez, Democratic Rep. of New York, raised over $1 million worth of emergency aid in four hours for people affected by the storm. Cruz should have been back at home following suit. Instead he prioritized getting out of Dodge over helping Texans in their time of need.

What makes Cruz’s lack of help amid the storm even more disturbing is he openly admitted the severity of the storm days before it hit. On February 15th in a radio interview on the Joe Pags Show, he encouraged Texans to stay home and not risk it. “Keep your family safe and just stay home and hug your kids,” Cruz said.

What was the point of telling people to stay home, if he was going to make his way to a luxury resort to relax? With knowledge of the storm coming, he and his team could have buckled down and started making contingency plans on how they would assist people in need.

Many of his peers from the GOP were critical of his actions. Republican Rep. Michael McCaul of Texas criticized Cruz’s actions on CNN’s “State of the Union.” “I think that was a big mistake and as for me, I was on the ground trying to help my people out and my constituents, and that’s what we should be doing in a time of crisis,” McCaul said.

Cruz’s actions were in poor taste. He proved when the going gets tough he has no problem leaving us behind. When he is up for reelection in 2024, we need to leave him behind by voting him out of office. Texans deserve better, period.