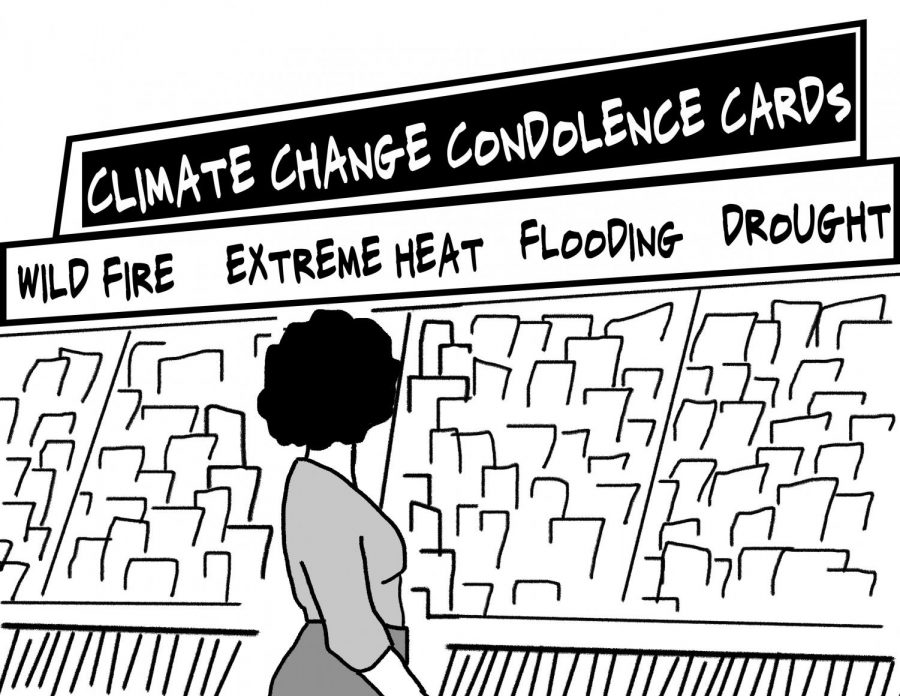 Without a stronger emphasis from political leaders on addressing the effects of climate change, we may be shopping for new greeting cards in the near future.

It is no secret the world is facing major irreparable damage due to climate change. As states across the nation address the issue, many Republican leaders in Texas have struggled to even accept or acknowledge the problem. Prominent leaders in the GOP have downplayed climate change as a springboard to galvanize their conservative supporters.

The bottom line is climate change exists and is backed by decades of scientific research. Texans need to wake up and stop wasting their vote on leaders who refuse to act on climate change. If predictions made by scientists come to fruition, Texans will face major issues in the decades to come.

According to StatesatRisk.org, an interactive website which analyzes climate change, Texas will be subject to extreme heat, droughts and inland and coastal flooding if we do not properly address this issue.

Texas’ delayed start in addressing climate change is not surprising when you look at state voting trends. Texas has remained a mostly red state for the last several decades.

Former Texas Sen. Kip Averitt told The Texas Tribune: “Unfortunately, climate change is associated with a liberal agenda that most Republicans are initially going to reject, just because it’s a [Democratic] political issue. Quite frankly, it was that simple and nonconstructive. … You do your rhetoric, we’re going to do our rhetoric, and in the meantime, nothing gets done.”

Climate change has been labeled a liberal issue making it harder for Texas’ predominantly conservative voter base to understand the severity of the issue. Over the last few decades GOP leaders in Texas have downplayed the effects of climate change and avoided acting.

Former Texas Gov. Rick Perry has been outspoken in his belief that climate change doesn’t exist. In his 2010 book “Fed Up!,” Perry claimed the Earth was experiencing “a cooling trend” and called climate science “all one contrived phony mess.”

In January, Gov. Greg Abbott took a stance against President Joe Biden’s move to recommit the U.S. to The Paris Agreement. The re-commitment to the Paris Agreement, according to Biden, would be “to put climate change at the center of our domestic, national security and foreign policy.”

In response, Abbott signed an executive order vowing to “direct every state agency to use all lawful powers and tools to challenge any federal action that threatens the energy sector in Texas.”

Weeks later, the same energy sector he was so adamant in protecting failed the entire state during winter storm Uri, showing firsthand what happens when climate change is not addressed. Millions of Texans went without electricity, heat, food and water. Many found themselves dealing with burst pipes and damaged property.

Abbott told Fox News the outages were due to wind turbines freezing. However, the Electric Reliability Council of Texas, the main manager of the flow of power for the state, reported the wind power was responsible for only a small fraction of the energy loss during the storm.

It is obvious Abbott made this claim to paint green energy alternatives as ineffective to cater to his base. Instead of shifting the blame to the wind turbines, Abbott could have taken the opportunity to address the state’s lack of preparation for climate change disasters. Instead, he lied to Texans to push his false narrative.

One thing is for sure, climate change is here and if we do not come together and put our political ideologies aside, we will continue to pay the price. Texas leaders cannot continue to sweep climate change under the rug. Texans must stop following party loyalty during elections and look at the bigger picture. Our state deserves better.