The Brookhaven Courier • May 12, 2021 • https://brookhavencourier.com/107195/sports/dallas-mavericks-give-back-to-essential-workers/

Dallas Mavericks give back to essential workers 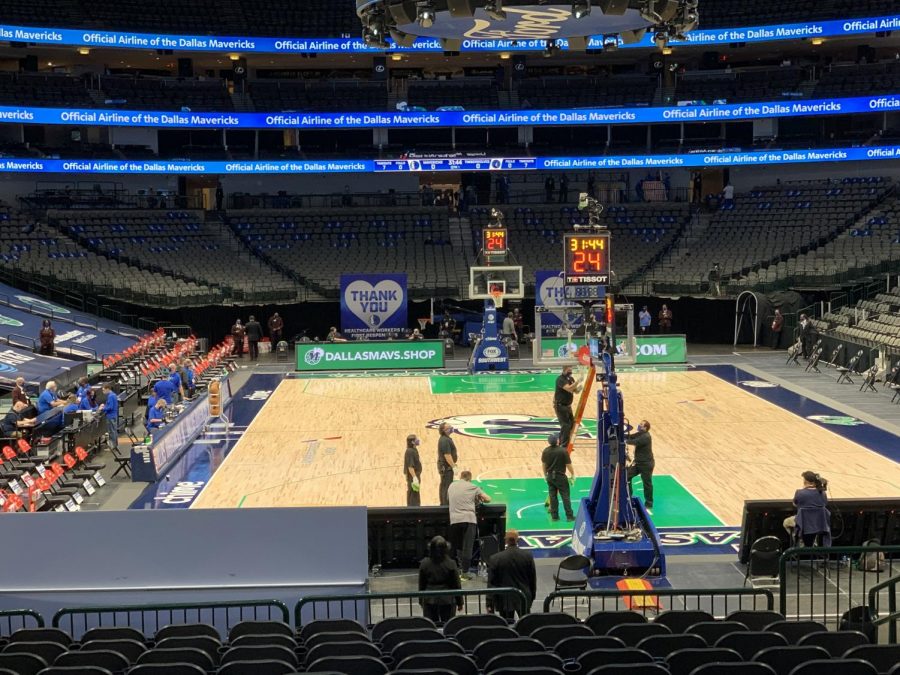 Workers set up for an in-person game for an audience of essential workers in February.

After roughly a year of staying at home, social distancing and enjoying virtual concerts and sporting events, being able to actually attend a Dallas Mavericks game in person seemed almost unbelievable. As a thank you for the hard work and dedication of all frontline workers, the Mavs organization allowed 1,500 attendees to gather safely in the American Airlines Center auditorium to watch the Mavericks play the Minnesota Timberwolves Feb. 8.

But the American Airlines Center I was familiar with – the one complete with its rowdy fans, blaring music and exciting atmosphere – was much different this time around.

According to Fox 4 News, Mavericks fans had not been able to physically attend games since March 11, 2020, when COVID-19 protocols limited large gatherings.

My wife, Leah Darwin, an ICU nurse and avid basketball fan, was in the passenger seat as we drove into downtown Dallas for the game. We were excited. The tickets were given to her last minute so we made the abrupt but delighted decision to spend our evening watching some basketball.

As we made our way to the stadium, the first thing we noticed was the traffic. There wasn’t any. The streets were almost empty, as they would be on an average Monday evening when the Mavericks weren’t playing. Though we arrived in a Nissan, we were allowed to park in the Lexus parking garage and we made our way to the entrance in record time.

At the main entrance there were no lines. Several event workers stood around nonchalantly in masks talking to one another while their co-worker took our temperatures. Inside was the standard metal detector procedure which my wife passed through without any problems. After the machine buzzed me at least five times, the security guard gave me an exhausted look and with a shrug waved me through as if he didn’t get paid enough to deal with this.

There is normally an atmosphere of energy and anticipation upon entering the auditorium, however that evening provided only muffled, distant voices and an eerie silence. The players had not yet begun warming up on the court and people were slowly making their way to their seats. The stadium was filled sporadically with 1,500 or fewer spectators.

In addition to the limited seating, people in groups were spaced out in pairs throughout the lower levels of the stadium.

We made our way down to our section which was directly behind one of the basketball goals. On each chair was a free Mavs T-shirt and hat pin. From our seats we could clearly see Luka Doncic, Boban Marjanovic and Dwight Powell. Mark Cuban leaned over a chair intently watching his players make their warm-up shots.

The building lacked the liveliness that comes from the excitement of so many eager fans. The Mavs store was nearly unoccupied. The concession lines were short. The hallways were clear. And though it did not feel like we were at a basketball game, it gave us hope that one day the stadium would be full and lively once again.

“I am a true Mavs fan and have attended many games in my time,” Darwin said. “This game was very different from any other I have been to. There were not nearly as many fans present as normal, but at the same time I felt a different type of energy in the arena. I think we were all so excited to be there. I felt a really big sense of hope, like maybe someday soon life is going to go back to normal and we will be able to do things like this all the time.”

According to The Dallas Morning News, the Mavericks were the 12th team of the NBA’s 30 to allow a limited number of fans to safely watch the games live as coronavirus regulations continue. The Mavericks allowed the fans free admission as long as they received at least the first round of the COVID-19 vaccine, showed their vaccination cards and completed the fan health surveys prior to the game.

Mavericks CEO Cynthia Marshall said, “The Mavs and the Mavs Foundation have been committed to supporting our essential workers through PPE and donated meals over the past year, and this is just another way we can say, ‘Thank you,’ for serving us day in and day out.”

Despite the announcer’s best attempt to rouse the small audience to make some noise, the game was relatively quiet, the prevalent sounds came from the squeaking of the players’ shoes, the artificial cheers played through the speakers when the Mavs rebounded and the occasional amplified swish of the net. The Mavericks beat the Timberwolves with a final score of 127-122.

“I thought that the idea of giving first responders and front line workers the opportunity to go to the first home Mavs game open to the public was amazing,” Darwin said. “Being allowed to do something so normal as going to a basketball game was a breath of fresh air. This past year has been horrible in many ways, and it honestly was so nice to have something normal and totally unrelated to the pandemic to do.”