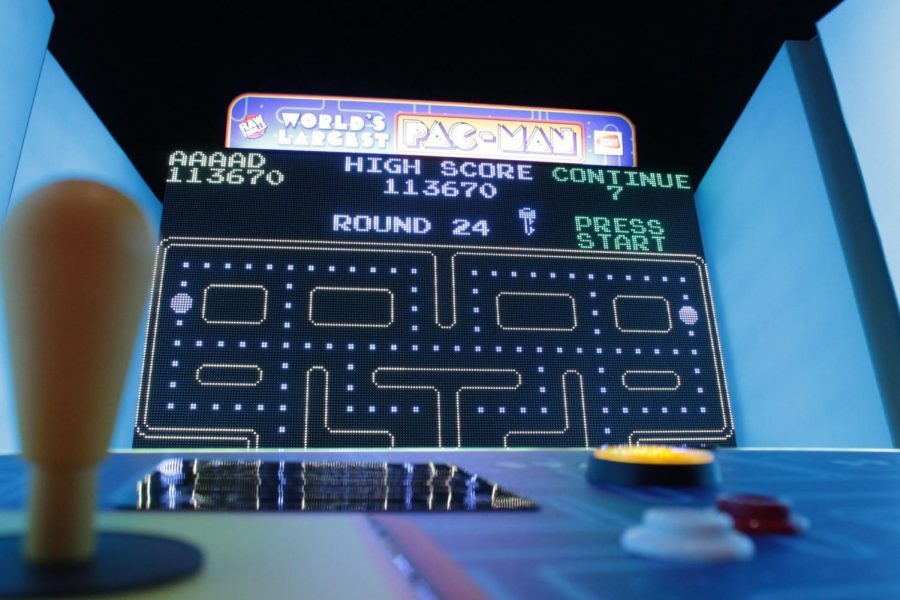 The world's largest game of "PAC-MAN" is displayed on a giant LED wall at the Perot Museum. Players use traditional joysticks to attempt to break the high score record.

The Science of Guinness World Records is the newest traveling exhibit to stop at the Perot Museum of Nature and Science.

The exhibit is filled with statistics on Guinness Record holders and showcases challenges giving participants an opportunity to set a new record.

One familiar challenge is setting a new high score for the arcade game Pac-Man. Players use a standard joystick while the game is displayed on a giant LED wall.

The exhibit is co-produced by Science North from Ontario, Canada, and Ripley’s Entertainment, the entertainment company founded by Robert Ripley and will be available through Sept. 6.

Mike Spiewak, vice president of exhibitions for the Perot Museum, said, “Using fingerprint recognition technology, the exhibition is able to keep track of your best efforts at the different interactives so you can see on the leaderboard how you rate against other attempting record breakers in the museum on that day.”

The exhibit also includes the world’s smallest movie. “A stop motion film made on the atomic scale,” Spiewak said, “with the largest panoramic image at over 846 gigapixels that allows you to pan and zoom in on a photo of Kuala Lumpur.”

A few Dallas locals have won Guinness World Records. Dallas College alumna and artist Patricia Rodriguez and her team received the Guinness World Record for largest makeup painting. The mural was headed up by Eyecon Murals and a team of freelance artists alongside Mary Kay cosmetics. For this world record attempt Rodriguez said it was important to know what the makeup could and couldn’t do, and what surfaces it would work on. The finished artwork measured 56.5 square meters (608 square feet), besting the minimum record requirement of 51 square meters (549 feet).

Jared Guynes, Nerf champion and social media manager at Stern Pinball, is a three-time Guinness World Record holder. In 2016, Guynes won his first record with the largest toy pistol fight. As a hired consultant, Guynes helped win two other Guinness World Records, one for largest parade of Nissan cars and the other for the most vehicle windows tinted in eight hours by a team.

Guynes has found a niche in winning Guinness World Records and helped others win them as well. Knowing how to correctly verify and document the activity to ensure certification is critical in obtaining a Guinness World Record. Guynes said, “If you don’t do it just right they’ll deny you.”

To ensure the safety of guests and preserve social-distancing protocols, the exhibit is open with limited capacity. Visitors can purchase advanced timed-entry tickets at perotmuseum.org.  Guests ages 3 and older will be required to wear masks or some form of face covering.