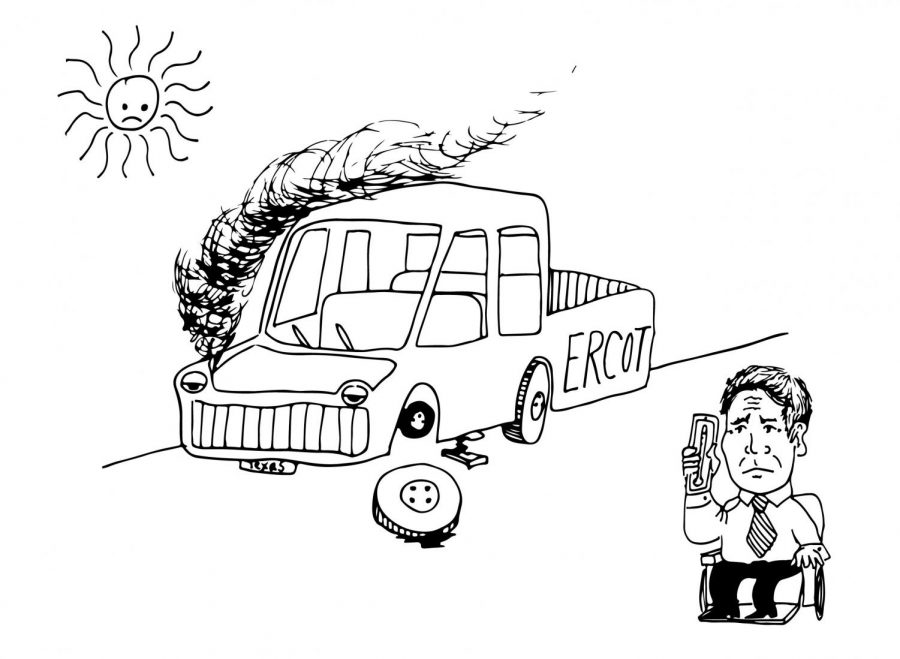 In the midst of a mild Texas heat wave, Gov. Greg Abbott and the Texas legislature prioritize other matters over fixing the state's broken power grid.

Winter Storm Uri transformed Dallas into a scene straight out of a dystopian film as unusually low temperatures froze the state.

As news swept across social media of rolling blackout threats, it seemed impossible the state government would allow the power grid to be intentionally turned off during devastating weather conditions which plunged Texas well below freezing temperatures.

“Energy conservation is critical,” ERCOT said in a Feb. 15 Tweet. “Rotating outages are underway to reduce demand on the electric system. We urge Texans to put safety first during this time.”

Naively, I believed compassion of those whom we rely on to lead us would prevail and the blackout would be temporary as suggested by ERCOT. By 8 p.m. as my three children, three dogs and husband gathered around the portable gas grill just outside our patio door to heat up dinner and warm their hands, I realized we were on our own.

The next day my husband and I joined hundreds of Texans in a line on Walnut Hill Lane. We waited for upward of two hours for entrance into a makeshift cul-de-sac where Discount Firewood was using a fork excavator to dump damp wood into the center as patrons were charged $25-$40 a truckload to fill their vehicles with wood. Consumers rushed in what looked like a scene out of “The Hunger Games,” against a six-minute timer to get enough wood to heat their homes and protect their families from hypothermia.

Stores in the Metroplex were soon out of wood, lighter fluid, generators, fire starters, axes and non-perishable foods.

Texans were on their own.

Texans realized the abandonment by state lawmakers and ERCOT. They rose to aid one another by crowdsourcing for those in need on social media.

We were fortunate enough to be able to get an axe from an Instagram friend to cut the wet wood we acquired. We relied on petroleum jelly, hand sanitizer and tampons to concoct fire starters to warm a small fraction of our home.

Many were not as fortunate.

Texans died due to ERCOT’s lack of action suffering from carbon monoxide poisoning as they resorted to using gas tanks to warm their homes. Pets died. Texans died on the road attempting to flee their frosty residences to homes of those fortunate enough to have heat.

Schools served as warming centers where hundreds bundled together in the middle of a global pandemic despite social distancing requirements.

ERCOT returned to normal operating conditions Feb. 19, according to a Tweet by the organization. “Thanks for helping the grid during this difficult time,” the post read – as if we had a choice.

ERCOT has the audacity to request energy conservation once again during the sweltering Texas heat this summer.

“Set your thermostat to 78 degrees or higher – every degree of cooling increases your energy use by 6-8%,” ERCOT said in a news release.

Texans readily mocked ERCOT’s request, refusing to adhere to conservation requests. Fed up with lack of reliability, some residents chose to indulge in the air conditioning while they could.

However, Texans should not get too comfortable with the idea of calling ERCOT out on their bluff.

The fear, disparity and death that blanketed Texas could easily repeat itself as Texas legislature priorities overshadow the well-being of its residents could reoccur.

Despite the body count on ERCOT’s hands, lawmakers have prioritized such matters as removing mask mandates, controlling the reproductive rights of women and criticizing critical race theory agendas in schools. The Texas power grid will have to wait its turn on the priority list.

When it comes to ERCOT, one thing Texans can rely on is the unreliability of the Electric Reliability Council of Texas.