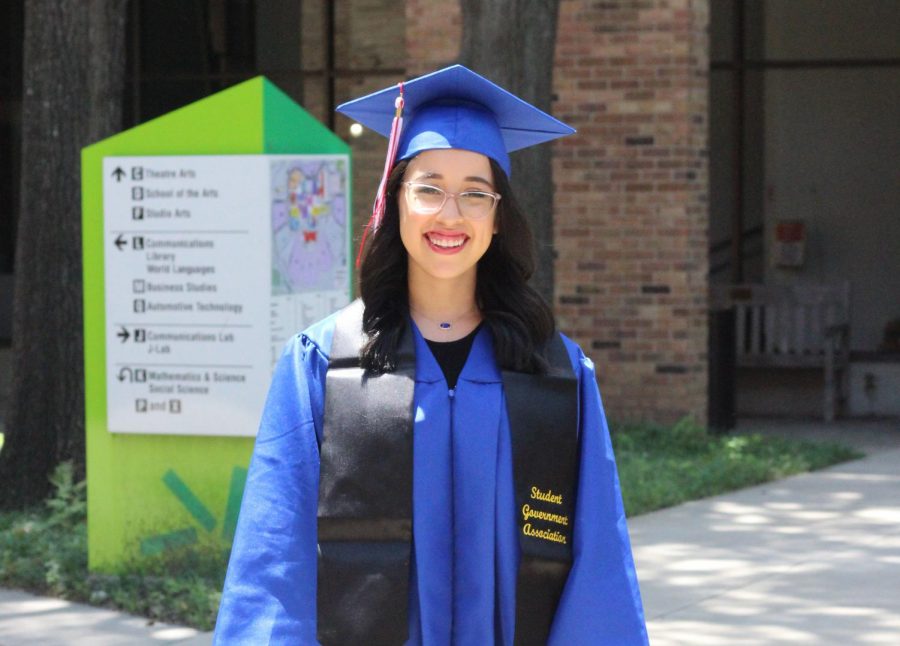 The Brookhaven Student Government Association gathered via Microsoft Teams for their last meeting of the spring semester on April 28. As everyone said their goodbyes, Liliana Cruz, Brookhaven SGA vice president, thanked colleagues for their support over the years. The semester was her last. She transfers to Texas Woman’s University in the fall.

Cruz said she started her collegiate journey as a commuter student, only traveling to and from school when necessary. After falling behind in classes, she said she realized she wanted to better herself. “I wanted to turn it around and make a change within myself,” she said.

Cruz said her No. 1 supporters are her mom and her sister. Besides her family, her biggest supporters have been her advisers Brian Borski and Clara Saenz. “From the moment I stepped into their offices, they saw potential in me that I didn’t and really helped me through this journey,” she said.

Cruz said she believes her most significant achievement has been serving as the 2020-2021 president for Texas Junior College Student Government Association Region II during a pandemic. TJCSGA’s Region II covers North Texas and as the Region II president, Cruz presided over all general assemblies and executive board meetings.

She also appointed committees, served as an ex officio member of all committees except the Nominations Committee, served as chief spokesperson for the TJCSGA and corresponded with key Texas legislative officials on important issues.

In 2020, Cruz was chosen to interview Dolores Huerta, a 91-year-old American labor leader and civil rights activist. She also served as a student ambassador for the Dallas Community Street Team, which promotes two-year institutions and explains why college is essential to future success.

Cruz also formed part of the Student Leadership Advisory Council at Temple University. The council comprises 23 members from across the country, which meets once a month to discuss basic student needs.

When Cruz was not busy managing classes or participating in organizations, she spent her time volunteering. Over the years she volunteered her time at Genesis Women’s Shelter during the holidays.

She has also given her time to TangoTab, an organization which donates portions of revenue from their app to local food relief organizations, according to their website. Cruz participated in TangoTab’s Feed the City event. The event involved bringing ingredients to make sandwiches and then providing the sandwiches to people experiencing homelessness.

Borski, Brookhaven SGA adviser, said when he first met Cruz, she was quiet and shy and was not involved. Borski said after interviewing her for the public relations coordinator position, he immediately knew she was going somewhere. “After I first met her, I could tell there was potential there, but I had no idea how great she was going to be,” he said.

Gabriel Medina, SGA president, said if it were not for Cruz’s encouragement, he would not have run for SGA president. He said she presents herself professionally and is enthusiastic about planning events and getting involved. “She’s definitely fun to be around,” Medina said. “She’s also really good at being structured and communicating details of an event.”

Cruz said she is most passionate about three major political issues: healthcare, immigration and education.

Her passion for healthcare advocacy started after witnessing her mother struggle to find proper care for her sister. Her sister required a pacemaker because of a life-threatening heart condition, but was not able to receive the care needed due to insurance problems. Cruz said, “I hated seeing my mom struggle trying to make ends meet.”

Cruz said her mother came to America as an immigrant from El Salvador at a young age. Cruz said hearing her mother’s story and watching families coming to America in search of a better life made her want to speak out about immigration issues.

Cruz said she believes there are always things that need to be worked on in the education system. “Some teachers require more training, and there’s not a lot of resources for teachers to use,” she said.

She does not think it is fair that some teachers must work multiple jobs to afford to pay bills, Cruz said. “They work countless hours to prepare these kids for their futures,” she said. Her love for education is what eventually inspired her to become an English major with a minor in education.

She said she dreams of becoming a high school English teacher as well as pursuing a master’s degree. “I want to become a director or a principal, but my dream is to work for the school board,” she said.