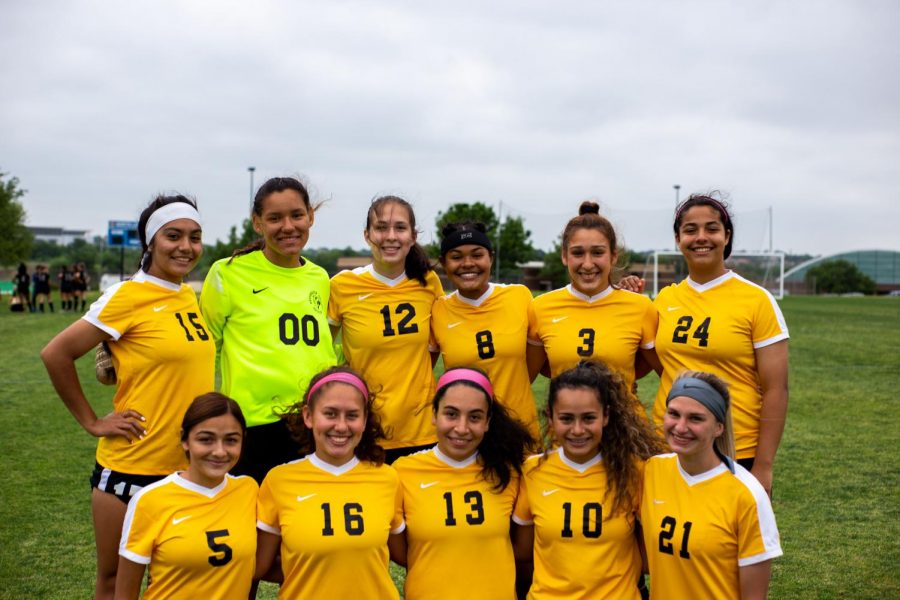 The Brookhaven Lady Bears pose for a photo before a game against the North Lake Blazers April 17.

“I thought we had a great season,” captain and left-wing Victoria Sifuentes said, reflecting on the year. “Unfortunately, we did come up short at the national tournament, but overall, I thought we had a pretty good season. We really worked hard for it, so I don’t think there’s anything I would change.”

Despite the heartbreaking loss, the team finished their season holding significant achievements, going 8-0 in conference play without conceding a single goal and boasting an impressive 85-5 goal differential across all competition.

The team booked its trip to nationals off a 5-0 victory over the Mountain View Lions in the NJCAA III South District Championship. According to Brookhaven athletics’ Twitter account, this was Brookhaven’s fourth consecutive regular season Dallas Athletic Conference championship, formerly the Metro Athletic Conference.

This feat would have not been possible without the dedication of the players to their craft.

“We tried to get the girls as prepared as possible,” Robert Williams, Brookhaven assistant soccer coach, said. “It was tough. They had about a month or two months off in between fall and spring. Then you have to readjust when it comes to fitness and everything. But we trained hard. We trained Monday through Friday up until our season started. [We] gave them a lot of fitness, a lot of drills, a lot of technical and tactical stuff.”

Also impressive was the team’s success despite the relative youth of most of its players.

“I am so proud of the way my team performed – undefeated, no goals against – given that we were a team of 75-80% freshmen,” Jimmy Elder, Brookhaven head soccer coach, said. “In our final game we started nine freshmen, and the way they played, the way they executed the game plan, the way they trained was just second to none. I’m just so proud of the players that we had on this group that were so committed to being the best they could be on the soccer field.”

Sifuentes, who will be taking her talents to the University of Houston-Victoria this fall, said, “I’m definitely proud of those freshmen that came in and really stepped up to the plate, knowing that there’s only five returners and so there’s a lot of spots, big spots that need to be filled.”

The camaraderie and rapport among the players were more than evident by season’s end. Sifuentes said her favorite memory was of the players busting moves to the video game “Just Dance” in their hotel rooms. Midfielder Lilee Simpson shared her fondness over Sifuentes succeeding in getting all the players to sing along to Jay-Z’s “Empire State of Mind” upon the team bus crossing into New York for a day of sightseeing.

Even though the trip ended in defeat, friendships were built, valuable lessons were learned and a burning fire for another championship run was kindled.

From week-long rigorous practice sessions to Elder believing the season was going to be scrapped altogether at one point, the Lady Bears have come a long way since their training began in fall 2020. There is much to admire, and there is much to look forward to.

Incoming students interested in playing for the Brookhaven women’s soccer team next season should contact Elder for tryout information.

Incoming players need to come in ready to lay it on the line. Simpson said: “The goal for next year is to show the incoming freshmen how Brookhaven really plays. We want to get them up to speed as quickly as possible so that we can see our flaws that we have and then fix them before we go back to nationals. The ultimate goal is to build the team together and be stronger than what we were this year.”