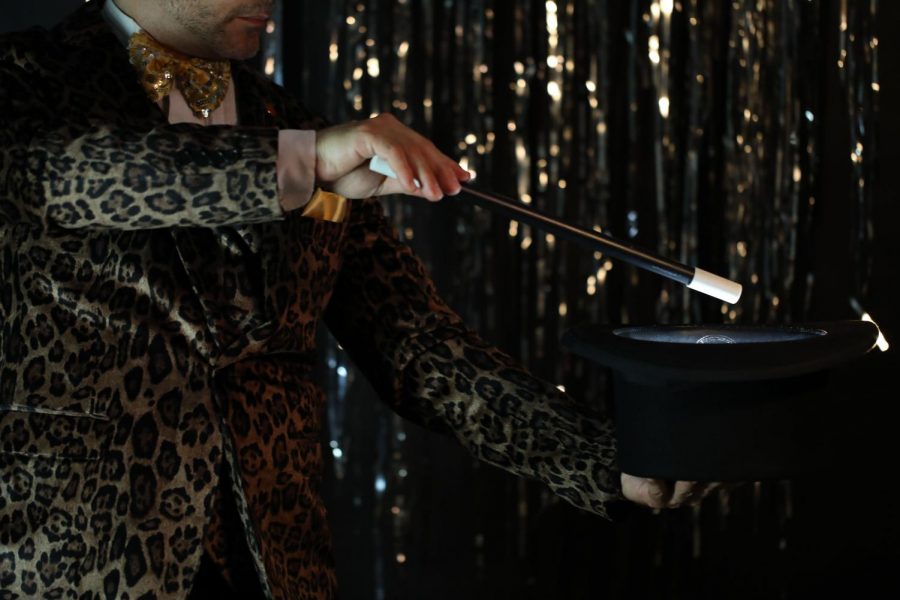 Magician Confetti Eddie bowed and briefly paused to wipe the tears from his eyes. If they were not distracted by his cape, gold blazer and gold turban sporting a big white feather, those who were in the audience might have noticed he was crying after the finale. Edward Ruiz, a magician better known as Confetti Eddie, had just performed the final curtain call at his magic parlor’s last show May 28, 2020.

Finding it increasingly difficult to adapt to the challenges COVID-19 brought on, Ruiz was left with no choice but to close the magic parlor for good in May 2020.

Despite the circumstances, Ruiz described the show as a satisfying experience. “We did it right,” Ruiz said. “Not only did we get an opportunity to do the last show, got everybody together, we got to say farewell to the space, because it felt like it got pulled out from under us. It was kind of unexpected and sudden, so we got to say farewell. And we got to do one last magic show.”

Since the space’s transformation from art gallery to magic parlor in 2012, Confetti Eddie’s Magic Parlor was a long-standing fixture in Exposition Park. What Ruiz recalls most are the people he met at the parlor and the relationships he established there. “I met a lot of magician friends that I know now from the magic parlor,” Ruiz said. “I would never have met all those people if I didn’t have a place to invite them to.”

He saw the magic parlor as a bastion for magic performers and enthusiasts alike. “It is just a wonderful position to be in as somebody that could offer a performing location for other magicians in a city that does not have any place for magic,” Ruiz said.

One of Ruiz’s fellow magicians, Trigg Watson, expressed his appreciation for Ruiz’s vision. “He is really enthusiastic about creating a strong community,” Watson said. “Something I appreciate about Edward is he is very visually focused because he has a background in visual art and lighting design.”

Mentioning Ruiz’s day job as a professional lighting electrician for the opera, Trigg said what makes Ruiz special is he is just as focused on the lighting, design, costuming, character and other details of showmanship as he is about the magic itself.

JACK OF ALL TRADES

Rather than commit to a disappearing act, Ruiz remained active and busy in the months following the closure of his magic parlor. Ruiz returned to classes at Dallas College Brookhaven Campus with a focus on improving his writing. He previously studied visual communications in the ’90s at Brookhaven.

He made custom wands and other products for magicians to purchase and use. Ruiz also headlined and performed in numerous virtual magic shows, including a series of shows he wrote and created titled “Mandolini” that loosely follow the plot of the popular Star Wars live action series “The Mandalorian.” Ruiz incorporated magic effects and props he built specifically for the show.

Karen Curtis is a devout fan of Ruiz’s who drives from Waco to attend his magic shows. She attended his last show at the parlor, and has been keeping up with his virtual shows. “Ed’s shows are very interactive,” she said. “There’s a lot of interaction with the audience. You’re very engaged in what he’s doing. You’re not just going to sit in the seat and you leave. You literally are immersed in it because of the way he does it.”

Ruiz said he is looking to bring that immersive experience back to the in person stage soon. On August 19, Ruiz is scheduled to appear and perform magic at Four Day Weekend Comedy in Lower Greenville. It will be the first time he has performed live in over a year.

Having some knowledge of the venue hosting his upcoming show, Ruiz said he is hopeful he will be able to recreate some of the magic from his old parlor. “You’ll get a little bit of a feel for that parlor, the way that I sort of wanted the audience to feel when they were seeing my show with that close up kind of parlor, cabaret kind of feel.” Ruiz said. “Four Day Weekend is very similar to the experience that you would have at Confetti Eddie’s, only there’s more room.”

LIVE AND IN PERSON

“If people watch stuff on video or even on Zoom, they think there’s something tricky going on,” he said. Performing in front of a camera has its limitations which viewers take into account, Ruiz said.

Live magic, on the other hand, is boundless, Ruiz said. “It’s like a real life movie happening right before your eyes.” Ruiz said. “I think it’s important to see magicians do their work and look at them. Watch what they’re doing. It’s that much more amazing.”

Watson offers a similar sentiment. He said he and Ruiz have had to come up with new ways to captivate virtual audiences during the pandemic. “I think all of us certainly miss that energy of having a real live audience in front of us and performing because magic is inherently, I think, an art form that is strongest when it’s experienced in person, live in person.”