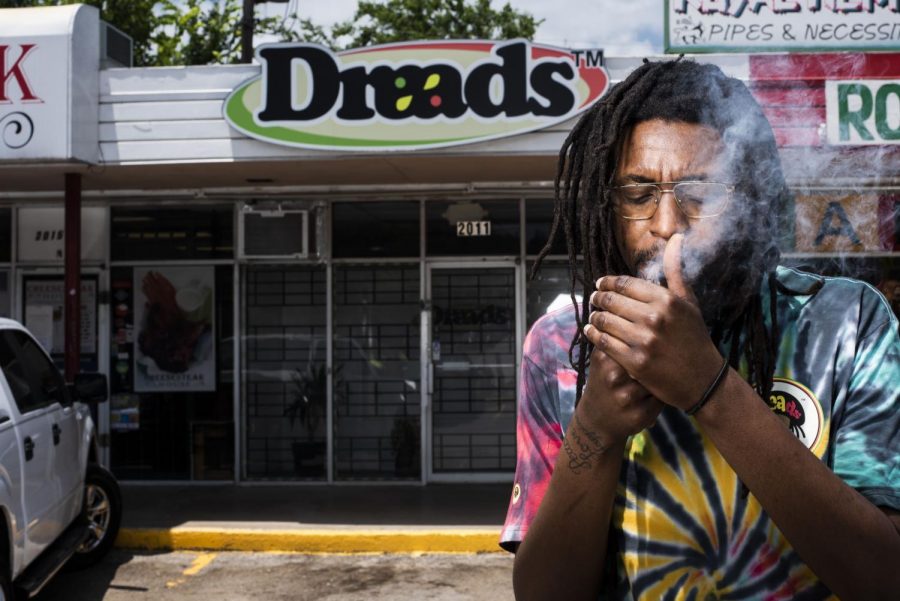 With long black dreads, a welcoming bright smile and open arms, Malen Blackmon, who goes by Mars, looks forward to the opening of Dreads and the future of Delta-8. Dreads will be his first business, a cannabis and lifestyle brand, dedicated to the sales of cannabis products set to open later in 2021.

In the meantime, he assists customers with a variety of culture and cannabis products inside the colorful green, gold and red hues of Royal Hemps Pipes and Cultural Necessities, an African and Rastafari culture smoke shop, located next door.

The shop is the first CBD dispensary in Dallas, which opened as a smoke shop in 2014. The teddy bear shaped gummies, coconut oil, crispy green flowers, wax, vape cartridges and even chocolate chip cookies are purchasable products one can buy as CBD or a now legalized Delta-8 THC variety.

Blackmon, a Dallas College Brookhaven Campus alumnus, was born and raised in Southern California. Growing up there, he experienced the opening of dispensary shops and the legalization of marijuana.

“You need money to play this game,” Blackmon said about getting into the cannabis business. “Trying to figure that all out yourself, it’s hard. So, [I moved] to try something different.” In 2018, at 24, Blackmon relocated to Texas.

After moving to a state where marijuana is illegal, Blackmon said he felt optimistic about the future of cannabis in Texas. He met and partnered with Ras Judah, the owner of Royal Hemps. “I instantly liked his character,” Judah said.

Blackmon attended Brookhaven where he began a journalism career writing for The Brookhaven Courier and for the Dallas Observer. It was during his time at the DO he read an article introducing him to Delta-8. According to the article, Delta-8 gives off the same essence as regular marijuana.

Delta-8 THC, or Delta-8-tetrahydrocannabinol, is a psychoactive cannabinoid found in the cannabis plant and was legalized in Texas under the most recent 2018 Farm Bill passed, is less potent than Delta-9 THC, which is federally illegal, according to NBC News.

Delta-8 is something Blackmon felt could be promising for Royal Hemps. Blackmon said: “I tried it. He tried it. That’s when we knew it was legit.”

Blackmon used a vape pen his first time using Delta-8 and recalled the high hitting him within minutes. “It creeps up on you,” Blackmon said. “It’s not always as instantaneous as Delta-9 THC. It seems to move through the body a little slower.”

Blackmon wrote an article for the DO about his first time experience Delta-8.

Jacob Vaughn, a staff writer for the Dallas Observer, said he has been smoking weed since he was 16 years old and strives to consume the most potent products he can find. The first time he heard about Delta-8 was through Blackmon’ article.

After doing some more research, Vaughn found out when a person eats a Delta-9 edible, the same chemical reaction happens in the stomach giving off the same level of high as when they eat a Delta-8 edible.

Thinking Delta-8 was like CBD and he would not feel anything at all, Vaughn wanted to find out if it was up to par.

“I took a really low dose of [an edible],” Vaughn said. “And I was just annihilated. I was shocked. And so I’ve just been on this Delta-8 obsession ever since.”

Megan Earlston, a former Brookhavean said she uses Delta-8 as a form of relaxation and healing for body pain after feeling sore from work. “I’ll just take a gummy and in 30 minutes my body will already start to feel better than like Advil could do,” Earlston said. Although she is not diagnosed with attention deficit disorder or attention deficit hyperactivity, she said hitting a Delta-8 pen allows her to stay focused while typing a paper or working on homework.

Owners and users are facing problems with the regulation of Delta-8 and the possibility of it being outlawed in Texas. Vaughn said unless people are buying what they know to be a good product, a lot of the time what is on the label is not going to be what they are consuming.

“It’s because there’s a lack of regulation,” Vaughn said. “Of course, Texas looks at that problem and thinks, ‘Oh, well, we just need to ban it.’ This just goes to show just how far behind we are here in Texas with cannabis reform. … It’s depressing.”

It has not been an easy journey, especially when taking into account the limitations minorities face, the ongoing struggle of racial bias. “Me being a Rastafari first,” Judah said. “I just felt like that was important to make sure that the ancestors had a voice and a say.”

Blackmon said: “It’s harsh out there man. To open up or get a manufacturing license for hemp in the state of Texas, you cannot be convicted of a felony in the past 10 years.”

Judah started Royal Hemps six months after prison without any type of promotion.

According to an NBC News 2017 survey, less than a fifth of the people who owned a cannabis shop were people of color. Black people only represented 4.3%.

“It’s taking a stance in the cannabis industry and saying, ‘Hey, we got a voice too, like, you’re not just going to throw us in jail and then make all these white people rich,’” Blackmon said.

“Racism and racial bias is just part of the American culture as apple pie is and it’s not going anywhere anytime soon,” Judah said.

AHEAD OF THE GAME

Blackmon said he is not worried about Delta-8 being outlawed, but he would not be surprised if it was. He said it has been a process of learning to adjust within the cannabis industry that has made it possible to be where he is today alongside Judah.

Blackmon and Judah have traveled to cannabis conventions in different states trying out different products and staying progressive in the industry. “We don’t go on vacations,” Blackmon said. “We’ll fly to Detroit or California and just go to the dispensary and then fly back, like that’s our vacation.”

He said they were one step ahead of the game when they realized the impact Delta-8 could have in the future, especially for their Dreads brand. With entrepreneurial minds, they began investing and planning in this multibillion dollar industry. “It’s kind of like a gold rush where everybody’s going that direction,” Blackmon said. “If you get the gold rush too late, you don’t get any gold.”

With the second anniversary of the Dreads concept coming up in November, Blackmon said he looks forward to the day he will officially open his dispensary business.

Blackmon is also working on a 10 year documentary, capturing the story of Royal Hemps’s transition into Dreads as the latter becomes the sole brand and his new project, House of Culture. Beginning with the story of his friend Judah and leading into the future of Dreads. Blackmon said he wants to capture a story of perseverance.

“I just want to tell that story of inspiration that, ‘Hey, it can be done.’”