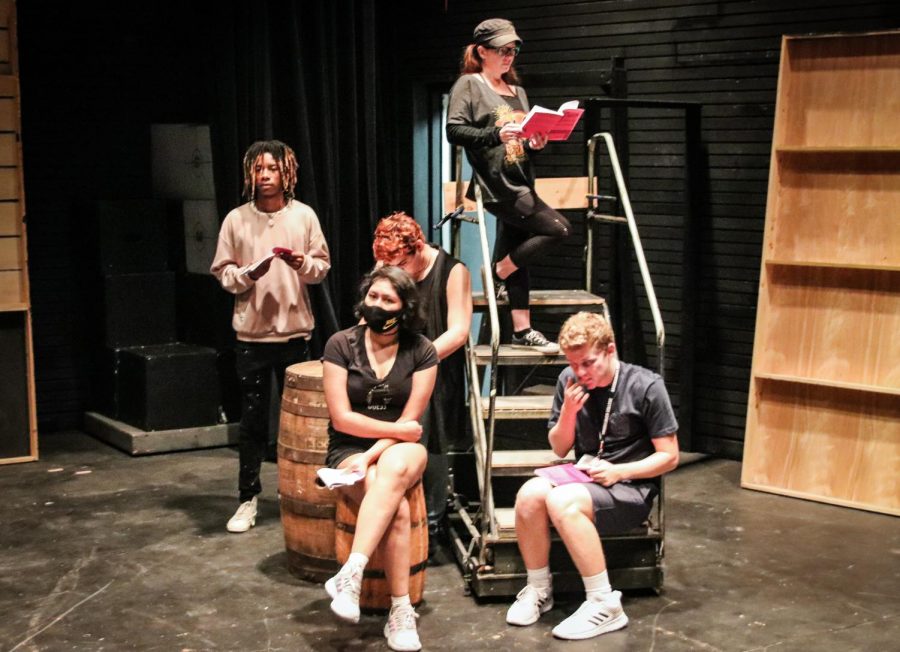 Students rehearse scenes from “ We Are Pussy Riot” in Black box theater located in Room C205.

The show must go on, as the saying goes. After a two year-hiatus, Theatre Brookhaven intends to return to stage this Fall 2021 semester with an adaptation of “We Are Pussy Riot or Everything is PR” by playwright Barbara Hammond.

Darise Error, full-time faculty and director, has begun rehearsals with the show’s cast. “I have always been interested in art that attempts and/or succeeds at bringing about social change – or art as protest,” Error said. As the title entails, the play centers on the actions of Pussy Riot, a Russian feminist protest punk rock and performance art group based in Moscow.

Pussy Riot gained international attention after three members were arrested, charged and sentenced to two years in prison for performing “Punk Prayer” in Moscow’s Cathedral of Christ the Saviour in February 2012. The song attacked the Orthodox Church’s support for President Vladimir Putin.

In an email to The Courier, Error said her interest in art as social commentary was renewed from watching the negative responses that often met peaceful protestors over the last two years in the U.S. “Doing this play, about Russia, sort of provides a safe space for people to come watch, and hopefully they’ll extrapolate about things that could be better here too,” Error said.

BACK IN THE LIMELIGHT

But getting back on stage is not as easy as remembering how to ride a bike. Dayna Fries, student and cast member, is an 11-year veteran of the Brookhaven stage. When the pandemic closed the curtain on stage productions, she lost 15 booked gigs. “With COVID, I just locked myself away to take all the COVID restrictions seriously, and I have forgotten how ‘to people,’” Fries said.

Despite the nerves, the Brookhaven theater is home to Fries. She initially came to Brookhaven for the nursing program after her mother died. However, an intro to theater class with Michael Robinson, Brookhaven theater faculty, changed her trajectory. Fries has performed the role of professional actress, prop designer and stage manager during her career.

Fries said she is excited and inspired by her fellow cast members. She said she is working with recent graduates excited to be in school. During rehearsals Fries and the cast discussed the plays content matter. “We’re having those discussions at rehearsals and their answers are smart, and so well-informed,” Fries said.  For Fries, the students’ high energy and enthusiasm creates a compelling discussion and environment.

In addition to seasoned cast members, Theatre Brookhaven will introduce new players this season. Citlali Arredondo, a student and cast member, is new to the Brookhaven stage.

In an email to The Courier, Arredondo said the most challenging part of performing in this play is to do it justice. “I think putting one’s mindset as both a Pussy Riot member and quickly turning their mindset to Pussy Riot’s naysayers in a second will be a challenge, but one that I know we are all willing to take on,” Arredondo said.

Error and Fries both said COVID continues to have a lasting impact while creating new challenges for stage productions. For Error, the pandemic affected the theater’s budget which made it difficult to secure rights to plays, obtain props or even ensure staffing. “We have been living with uncertainty for over a year now regarding how many technical theatre people would be left, would theatre spaces be safe for actors and audiences alike, and if they’d have time to design and build and light and costume when the number of jobs was being halved,” Error said.

Despite the uncertainty, Theatre Brookhaven marches on with excitement. Error said: “The real event happened in 2012, but for many of today’s students it happened half a lifetime ago, when they were really not aware. I am excited to share this story with a new generation.”