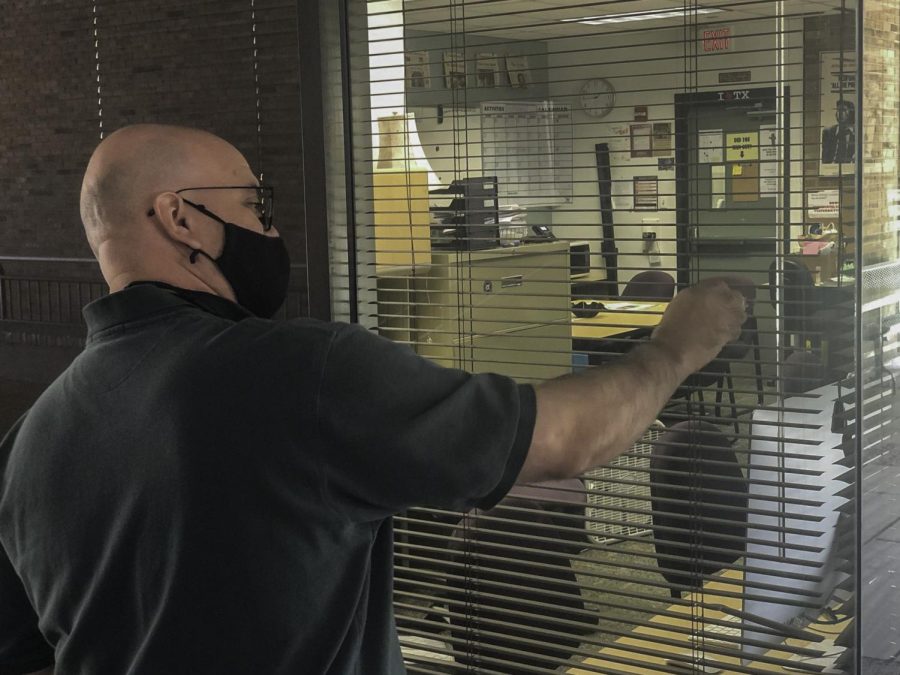 Faculty member Jamie Smith scrapes off a religious sticker found on one of The Brookhaven Courier’s windows.

Property damage struck Brookhaven Campus in the form of dozens of unapproved religious stickers which began appearing before the start of the Fall 2021 semester.

The stickers, which denounce the LGBTQ+ community while promoting Christianity were found in buildings across campus. Stickers have been placed on doors, walls, windows, appliances, elevators and pieces from the college’s permanent art collection.

An anti-LGBTQ+ sticker was found on The Courier newsstand on campus. One sticker cites Bible verse “Leviticus 18:22: Do not practice homosexuality, having sex with another man as with a woman. It is a detestable sin.”

Brookhaven President Linda Braddy said Brookhaven strives to be inclusive and is working to have the stickers removed. “We definitely don’t want anything that displays any kind of negative hate speech against any group,” she said. “It doesn’t matter what group it is or what religion it is.”

Brookhaven Police Sergeant Brian Locke said the campus has investigated similar matters before. “Many students do not understand that simply writing on the bathroom stall with a marker is a felony in the state of Texas when the vandalism is done on a public institution of higher education,” Locke said.

It is currently unknown whether the perpetrator is a Brookhaven student, staff member or just someone coming onto the campus.

According to Locke, the situation would be handled the same regardless of who committed the act. “We collect evidence and facts from the investigation, make arrests when needed, and present such information to the district attorney for prosecution,” Locke said. “All people are treated fairly and given the same due process rights when investigations occur.”

According to Locke, if the perpetrator is found guilty, they could face fines or be charged with anything from a felony to a misdemeanor, depending on the dollar amount of damage done by the stickers. “Other penalties include civil liabilities or being permanently expelled from Dallas College and not being able to return or both,” Locke said.

Brookhaven instructor Jamie Smith said he began noticing the stickers on campus prior to the start of the Fall semester. “I saw one covering up part of an exit sign,” Smith said. He said he has removed over 100 stickers from across the campus.

Some of the stickers were removed from surfaces by campus facilities workers. A wooden statue, “Saxophone Man,” located in F Building was one of some permanent art pieces that had a sticker placed on it. The statue is part of Brookhaven’s permanent art collection since 2002 and was made by former student Clayton Hurt. Hurt said he was not bothered by the stickers. “At least they selected a fitting sticker for the sax man. ‘It is well with my soul,’” he said, referencing the message on the sticker found on the statue.

The Brookhaven Campus police department asks students, staff and faculty to come forward with information if they know of anyone vandalizing or damaging campus property. Locke said those who want to report a crime should give a detailed description of the person or persons committing the acts.

“A clothing description, name of the person, the vehicle they drive with a license plate, or class they attend. This information is very helpful in speaking with the right person who may be committing these acts,” Locke said.