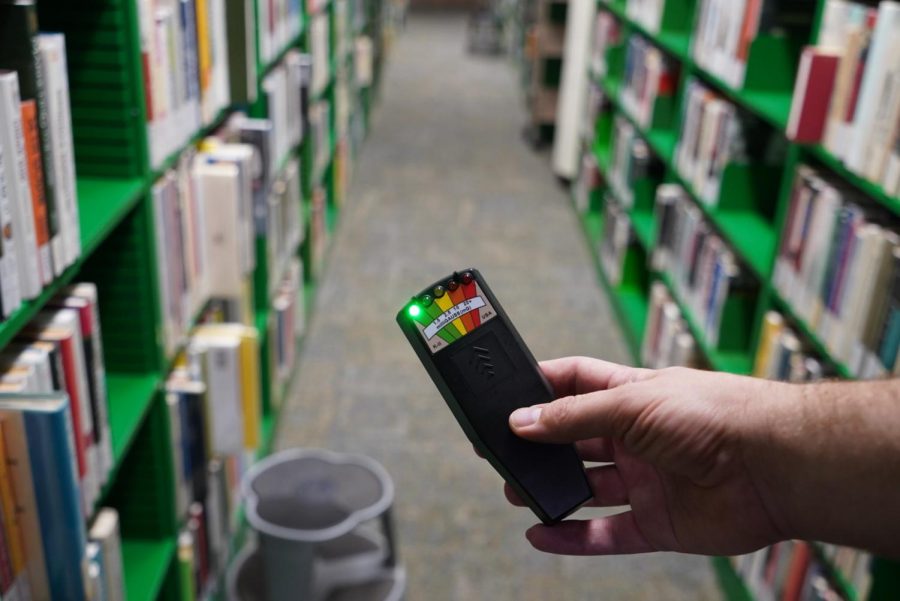 A Dallas College employee, who asked that their name to be withheld, uses an electromagnetic field meter at the Brookhaven Campus library Oct. 21 to check for paranormal anomalies.

Over the years, some Brookhaveans have said they have experienced paranormal activity on campus that could not be explained. Doors and elevators opening and closing for no apparent reason are among the supposed encounters on campus.

“I got goosebumps up and down my arm,” Robert Martin, former student and member of North Texas Paranormal, said. “This thing just opened the door.”

Ann Cary, a Brookhaven student, said “This is a very positive place lots of happy energy, everybody’s friendly and I can’t imagine a place on campus where I’d be more comfortable.” Cary said she has never seen or experienced any ghosts or activity in the area she’d call paranormal.

Leggett said she believes she has seen exactly what is responsible for these ghostly happenings.

“There was a little boy, a ghost boy, who would move things in the ceramics lab,” Leggett said. “I would see him skipping through the rooms day and night. Other people sensed his presence also.”

While not always the case, Leggett said she remembers the 9-year-old ghost boy being a gentle and happy presence with a streak of mischief.

“You’d come in the next day and it’d be different clay in your locker or your tools would be in somebody else’s locker,” Leggett said. “Or there would be an imprint in your clay project.”

Leggett said her gift of being a psychic medium is what has allowed her to see and interact with spirits such as the ghost boy. She credits undergoing a traumatic experience, her premature birth due to lack of oxygen, that allowed her to communicate with animals as a child.

Prior to running for various local offices in Denton, Leggett said she scrubbed the internet of her past as an animal whisperer and psychic medium out of fear of being ridiculed. However, she said she now believes people are beginning to open themselves up to supernatural experiences.

One reason for this rise in interest is the ongoing advances in technology.

“When I started the team back in the ’80s it was a hush-hush subject,” Laura Kenna, an organizer of the Texas Investigators of the Paranormal Society, said. “And if you brought it up they would look at you like you’re absolutely crazy.”

Ready or not, those in or around the Dallas-Fort Worth area may need to begin preparing themselves for an increase in ghoulish behavior. Some paranormal investigators believe the continual growth of North Texas may lead to an increase in supernatural activity.

“It’s all haunted,” Leggett said. “If it is not malevolent and has been there forever, then who are we to make it go away? That’s not polite. There may be blowback if you try to make it go away. So, the first thing you do is talk about coexistence.”

While the validity of these claims has yet to be verified, Leggett has expressed enthusiasm for uncovering the history behind the spirits that may lurk throughout several parts of Brookhaven Campus.