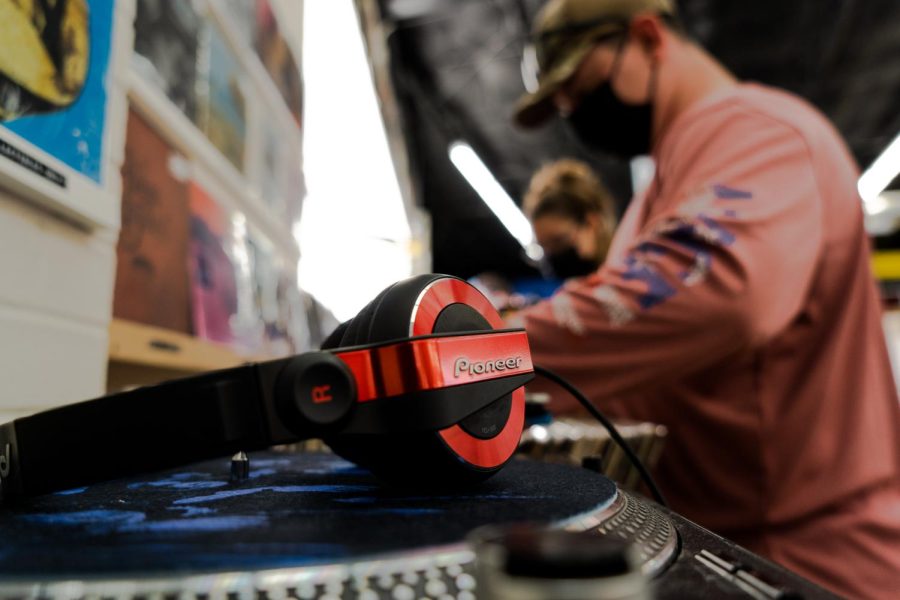 During the pandemic many record stores pivoted to online sales, but as stores began to re-open customers returned to their favorite local record stores such as Josey Records located in Farmers Branch.

This year record collectors across the country will line up at their favorite record stores on Record Store Day on Nov. 26. Customers can expect to find everything from contemporary releases such as Adele’s LP “30” to exclusive re-releases from bands such as  The Jackson 5 or Duran Duran.

According to the Recording Industry Association of America, or RIAA, record sales grew by 24% from 2019 to 2020, surpassing CDs.

Despite lockdowns forcing brick and mortar stores to limited capacity shopping, record enthusiasts continued to shop as some stores introduced new ways to buy their products.

Other record stores in the North Texas area such as Forever Young Records and Spinster Records also relied on promoting their inventory on social media for sales.

With the change to online sales and new social media attention, record stores began to reach a younger audience who might have never held a record in their hands. MRC data shows the younger demographic now accounts for a higher percentage of sales.

The co-owners of Good Records, which has been around for nearly a quarter of a century, began a new service called Good Records To Go.

Chris Penn, co-owner of Good Records, said he sees customers from pre-teens to the elderly shopping at his store on Garland Road.

Curbside pickup and delivery took over the in-store experience. Customers clicked and picked up instead of digging for hours looking for that missing record in their collection.

Elsa Alvarado, a local record enthusiast, said she prefers visiting record stores in person because she never knows what she might find. “When you go record shopping online it’s like ‘OK, I’m just looking for this specifically.’”

Alvarado, who is 15, started collecting in 2020. She now finds her new favorite artists in vinyl record format. “Going out and being able to look for the music that you love just gives you that sense of excitement,” Alvarado said.

After the early 2000s, vinyl records were considered outdated as CDs and music streaming services became more prevalent. But within the last decade vinyl records have made their way into the homes and hearts of people across the world, even surviving the effects of a global pandemic.

Younger people are purchasing vinyl and cassette tapes due to the representation in Hollywood and Netflix movies and shows, Cameron said.

RIAA data reports that the increase of new media being released on vinyl impacted sales with new record releases making up 6.4% of  sales volume in 2020.

During the closing of nonessential businesses, people found new hobbies and activities to invest their time in, with entertainment becoming the most important source of distraction for many, according to the U.S. Chamber of Commerce.

“There’s that interaction with the vinyl,” Cameron said. “So when you buy a piece of vinyl [and] you hand over your 20 bucks, you get a tactile thing that you own.”

The growth of this vinyl revival is due greatly in part to the day reserved for records and record buyers alike – Record Store Day. On this day artists release special edition albums, collectibles and many types of recordings.

“We like throwing the big event once a year where we have the bands and the barbecue and the drinks and party,” Cameron said recalling Record Store Days prior to the pandemic.

In 2020, the event was divided into three separate drop dates with each offering different releases, according to the official Record Store Day website. The record stores across the country adapted to a multi-day event, despite participating in Record Store Day for many years before.

“We’ve done Record Store Day since it began,” Penn said. “We were one of the founders of the actual event.”

In the past, Record Store Day events were centered on gathering offering food and mini concerts.  However, due to the effects of the pandemic, many record stores have toned  down their events and put a narrower focus on keeping customers safe. Some stores have limited store capacity and provide customers hand sanitizers  before entering the store.

“It’s almost a community service running a record store,” Penn said. “You don’t really get rich doing it, so one of the intrinsic rewards is sending somebody home happy and they can enjoy the music they bought.”